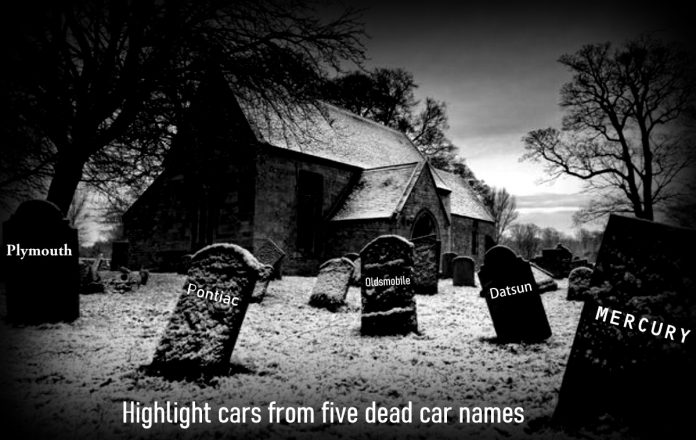 MyStarCollectorCar likely needs to clarify the “dead brand” part of the title. We are a vintage car e-zine, so the dead brands refer to famous cars that are no longer built by their parent companies.

Some famous car brands have exited onto the big freeway in the sky over the past several years and we at MyStarCollectorCar would like to pick their five coolest legacy cars, a process that is neither scientific nor subjective.

One of the most famous dead brands is Pontiac. This legendary member of the General’s army of fine automobiles was killed in action in 2010 after 95 years as a loyal GM foot soldier. Almost a century in the automotive biz produced many worthy candidates bearing the Pontiac name, so our goal to pick the coolest Poncho (slang for Pontiac) was a sizable task.

After much deliberation, our choice for coolest Pontiac of all time is the 1965 Pontiac GTO, the best car decision ever created by John DeLorean in our opinion, with all due respect to his own car made famous by Hollywood, Michael J Fox, and drug sting operations.

The GTO actually debuted in 1964, but the ’65 Goat (slang for GTO) was the coolest and baddest version ever produced by Pontiac. Even a DeLorean equipped with a flux capacitor was never this cool.

The second addition to our dead brand list is Oldsmobile, another famous GM brand that was an independent car builder in the late 19th century before the Olds brand was adopted into the General Motors family in 1908. Eventually Oldsmobile died of old age in 2004 after a long production run that spanned three separate centuries.

The long history of Oldsmobile made our task as difficult as our Pontiac choice, given the large number of cool Oldsmobile cars produced between 1897 and 2004. Eventually MyStarCollectorCar settled on the 1966 Olds Toronado, a revolutionary front-wheel car built during an era when rear-wheel drive was the only way to fly with Motor City.

The ’66 Toronado was ahead of its time, even in terms of overall style. Throw in front-wheel drive powered by a big block engine and the first year Toronado was nothing short of brilliant. So brilliant that one of our MyStarCollectorCar writers (me) even built the ’66 Toronado scale model as a kid. More importantly, it was cool- then and now.

The third addition to our deceased car brand list is Mercury, Ford’s tweener luxury model from 1938 until its untimely death in 2011. Henry Ford’s son Edsel wanted to provide a car that filled the company’s bling gap between a Ford and a Lincoln in the Blue Oval family of fine cars, so he introduced the Mercury during the late stages of the Great Depression and prior to the start of World War Two.

Mission accomplished for Edsel, the Mercury brand was more luxurious than a basic Ford, but less ostentatious than a Lincoln model. However, our task is simple: name the coolest Merc ever built. MyStarCollectorCar had another tough task in this department, but we settled on the 1949 Mercury.

The ’49 Merc became a legendary part of the custom car folklore because of George and Sam Barris. They took the brand-new style of the 1949 Mercury and ran with it, a major decision that sent a tidal wave of publicity into the custom car hobby for the Barris brothers and their stylized Merc lead sled.

The 1949 Mercury was the start line for the bold new design of these cars and 1951 marked the end of the line for them. In between is an amazing three-year production run for one of the coolest cars ever built by Ford.

The fourth addition to our dead car brand list is Plymouth, a famous car name that had a 73-year production run from 1928 until 2001. Plymouth garnered a reputation as a bland, reliable, and affordable car for frugal buyers whose main claim to fame was boring other people to death.

However, the Plymouth brand took a momentous turn for the better when the Fury debuted in 1956 under the watch of legendary Forward Look guru Virgil Exner, a man who took tailfins and flew with them at Chrysler during the late 1950s and early 1960s.

Plymouth finally came alive in the cool department, but MyStarCollectorCar’s highest award of coolness goes to the 1970 Plymouth Superbird, a wild-looking car that was only built for one year to relaunch Plymouth’s NASCAR race win record back into the stratosphere.

There is no good way to describe a Plymouth Superbird, other than what happens when lightning fast and outrageous style get married and have a kid named ultra-cool.

The fifth and final member of our list comes with an apology.  MyStarCollectorCar would like to apologize for including Datsun on our list because it is not a completely dead brand since the Datsun name is still used for low end cars in developing countries. However, the Datsun name has been dead and gone in North America since 1986 after a multi-year phaseout before it was completely replaced by the Nissan label in the domestic market.

To be honest, we at MyStarCollectorCar do not spend a lot of time thinking about Datsuns (and exactly zero time about Nissans), but we always find time for the 1970 Datsun 240Z. The ’70 Datsun 240Z was way ahead of its time in terms of both performance and ground-breaking style in an affordable package.

The timeless design of the 240Z extended into the 1980s, but the start line for this Datsun was 1970 in North America when it was introduced to a fascinated public. The 1970 Datsun was a cool car 51 years ago and it is even cooler in 2021.