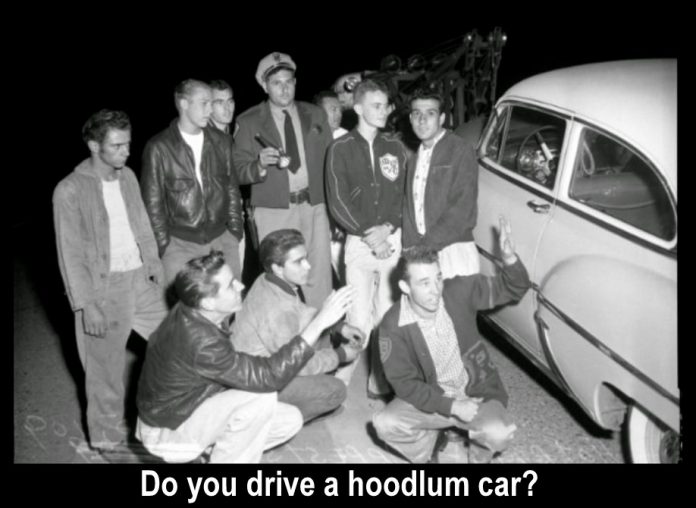 Hoodlum is not a new term.

In fact, ‘hoodlum’ goes back to 1871 San Francisco when it was applied to street thugs who liked to beat up shop owners and mug people in what was then a wide-open seaport town.

The most obvious place to begin is the classic hot rod. Hoodlums liked cars that were noisy and built for more go than show, so paint jobs weren’t important–but speed was a big deal. So was the racket you made every time you revved your engine–most of these cats liked the sound of open headers.

They weren’t pretty and most of their parts were scavenged, stolen–or both. The guys who built them were self-taught engineers, but if the engineering didn’t work out, the self-taught engineer became a newspaper headline that read: “Hoodlum Teenagers Killed In Fiery Wreck”.

Hoodlums weren’t all about speed. They also drove four-door sedans with a few tricks under the hood because they liked the extra room to haul fellow hoodlums to places where backup hoodlums were needed.

The tricks under the hood were only needed when they had to outrun the local punks or the local police because most towns weren’t fond of new hoodlums in their city limits.

Some hoodlums broke the “go over show” rule because they wanted a street rod that not only went fast–it also had to look great. They did this for a few reasons.

They were extremely confident in their car’s performance–plus they had a job, so a cool paint job was possible. The final reason was simple–they wanted to impress females. A flashy paint job with a beast under the hood ticked off all the boxes in that scenario.

There were other sub-rules in the hoodlum car scene. Wheel covers were optional, but wide-white tires were decidedly non-optional.

Full wheel covers were just another thing to lose during a high-speed chase, plus other hoodlums like to steal them. Why become a target?

You could run low–a lot of hoodlum cars were full of punks, so they naturally rode lower, but if your car was at factory height, you and your buddies were destined to spend a weekend cutting front coil springs and taking a few sections of your rear leaf springs.

Hoodlum cars in the 60s took a different angle, so you saw more rake with jacked-up back ends.

Some of these changes came from the dragstrip where guys experimented with ride height for traction, so you’d also see hoodlums driving cars with jacked-up front ends. It was all about looking tough in hoodlum world. Anything less was an invitation to a knuckle sandwich.