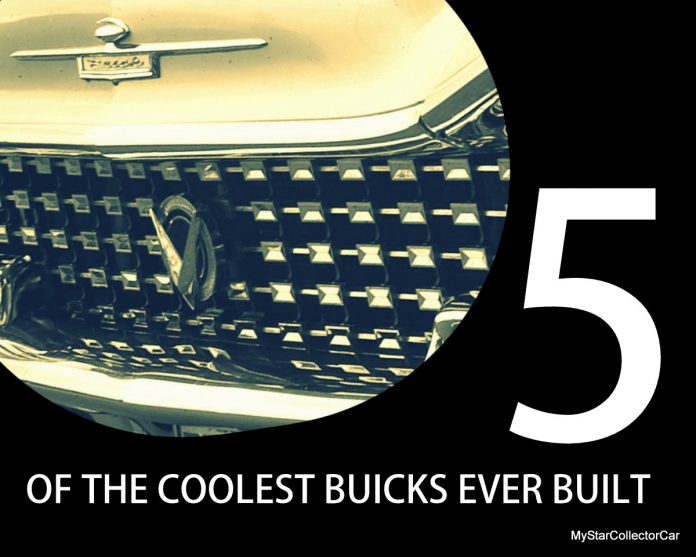 A strong argument could be put forth about the 1971 Buick Riviera’s status as the coolest Buick ever built by the General.

The ’71 Riv was known as a Boattail because of its radically designed fastback roof that was either loved or hated by car guys when the car debuted that year.

The first Buick on our fan boy list is the 1957 Buick Roadmaster. The name alone is enough to sway our opinion because “Roadmaster” has a macho tone to it-and the ’57 Roadmaster lived up to this handle in a very cool way.

The ’57 Buick Roadmaster was a large-and-in-charge urban assault vehicle that embodied brute force on four wheels. The 1957 Roadmaster looked like it was not only looking for trouble-it wanted to run right over it.

Hidden headlights were a relatively new post-war concept in 1965, with all due respect to the ’63 Vette, but Buick stole the show in our opinion here at MyStarCollectorCar. General Motors climbed Mt Everest in terms of cool hideaway headlight style when they built the ’65 Riviera-and there were no more mountains left for them to climb after its debut.

The third addition to our cool Buick list was also a 1965 model, namely the Buick Electra. We were drawn to the ultra-stylish front end of the 1965 Buick Riviera, but the ’65 Electra’s cool factor extended from its wall-to-wall rear taillights, a new look for the Electra 56 years ago.

The 1965 Buick Electra was a big car in that ocean liner sense, mainly because most potential buyers wanted large scale luxury when they bought a Buick. The ‘65 Electra ran with the big dogs (Lincoln, Cadillac and Imperial) in terms of sheer size, but these big Buicks also had massively long taillights that were likely visible from Gemini spacecraft when Electra drivers hit the brakes.

The Electra’s taillights were also hard to miss here on Earth because they were that big- the very reason MyStarCollectorCar had to include the ’65 Buick Electra on our cool list.

The fourth member of our list is any 1959 Buick model because they all shared a common design in ’59. Buick’s wild style would spill over into the 1960 models, but we chose 1959 Buicks because they were the first models to wear this striking style.

The ’59 Buick had an offset canted front headlight design that was completely different from the 1958 Buick and allowed GM to experiment with front and rear horizontal fins that embraced the Space Age in a big way.

The car’s round rear taillights resembled rocket after-burners for that same reason, particularly since they were positioned in the rear horizontal fins. The 1959 Buick had a bold and beautiful design that made it stand out in a crowded fin car world that year.

The fifth and final esteemed member of MyStarCollectorCar’s cool Buick club is the 1987 Buick Grand National GNX. MyStarCollectorCar leans heavily toward cars built long before the late 1980s, but we would be hard-pressed to ignore these Eighties road rockets because they were also very cool.

For starters, the GNX was a rear-wheel-drive sedan built during an era when rear-wheel-drive sedans were getting neutered and then run over by the front-wheel-drive movement. The GNX models were built to dominate on the street in the dying gasps of the muscle car movement in 1987, but they were powered by a highly engineered V-6 engine that was given every available power boost in the late 1980s.

The GNX is a worthy addition to our cool Buick list because it was a last hurrah hot rod in the 1980s. Muscle cars were not dead in 1987, but they were an endangered species in Detroit. Right up until the 1990s.

SEPTEMBER 2019: A HUMPTY DUMPTY 1965 CORVETTE GETS PUT TOGETHER AGAIN