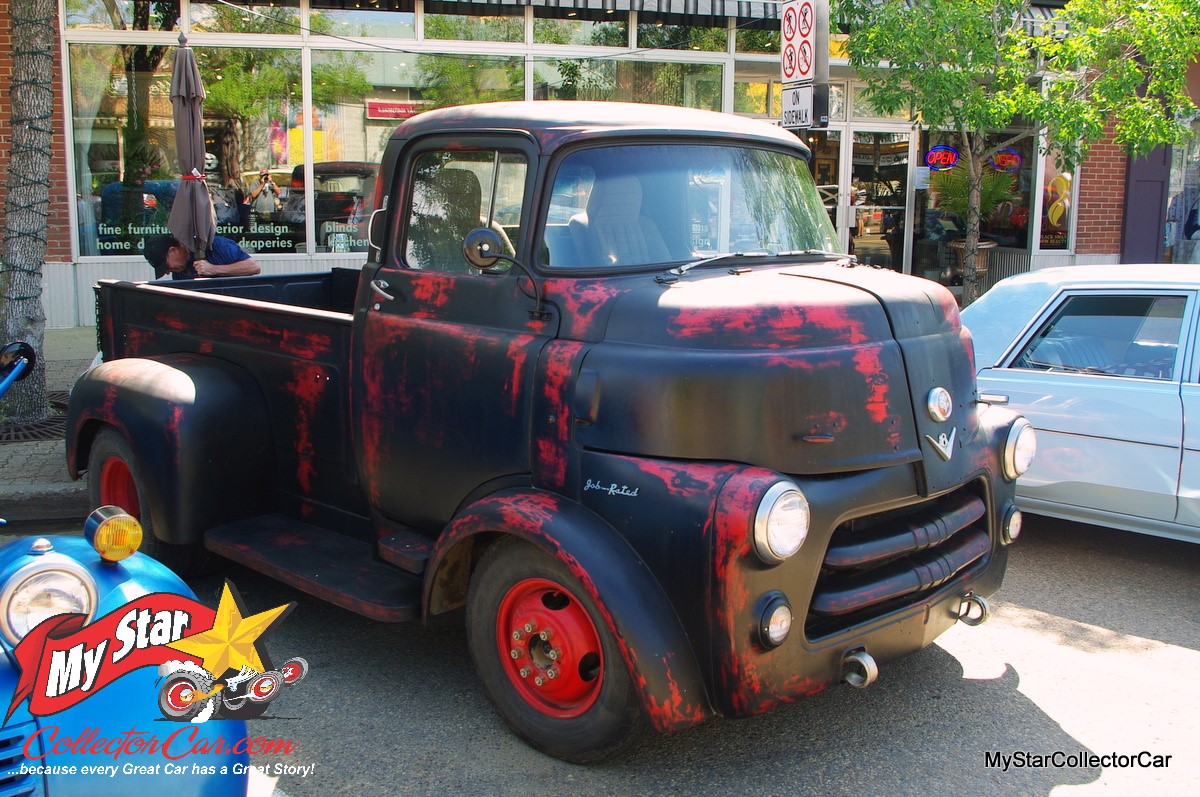 The hemi is a legend in the car world, but few people know it was a workhorse engine so you could find it in a farm truck–car guys coveted these engines, so they ripped them out of everything from Imperials to grain trucks.

Doug Smith is the proud owner of this custom and he explained how his buddy wanted the 1st Gen hemi—but not the truck it was attached to–so Doug grabbed the discarded body. Doug said too many Dodge CEOs were crushed after coughing up their factory hemi engines and he didn’t want to see this truck suffer the same grim fate. Doug works with metal every day as a metal artist so the work on the COE didn’t intimidate him.

The COE’s frame was a casualty because Doug found a Cummins-powered 1993 Dodge Dually 1-ton for a base. After that first step, the real work started because the frame had to be heavily modified before it would fit under the old grain truck body. Doug cut 22” out of the frame so the COE’s wheelbase is shorter than the family minivan’s wheelbase.

There were numerous modifications to the body because this was a tall truck in stock form, but now it had to fit on a much different platform. He added six inches of height to the truck box because as he said, “It looked strange” behind the tall cab. The box itself was from an old IHC and Doug was happy to add confusion to the equation, because he left the ‘International’ letters on the tailgate and added a ’47 Chevy car rear bumper.

He also had to modify the back fenders, so Doug added nine inches to accommodate the Dodge dual wheels. The interior required a great deal of thought, because the Cummins is so massive it takes up a big chunk of space in the cab. The passengers have an offset space to squeeze in beside the engine cover and the steering wheel had to be moved 2” closer to the door.

The windshield was another adventure because Doug researched and sourced a windshield before he started, because he didn’t want to get into the project and find out he couldn’t get one. In Doug’s words, “It was horrible to get” because the guy who said he could get one couldn’t find one a year later. He said he “didn’t spend two years on the project just to have it end because of a windshield”.

Fortunately, he did track a windshield down, but it was a lot more expensive than the original quote.

The key to success in any project is how well it turns out after years of effort and investment. Doug got exactly what he wanted because this truck does everything he wants–it can haul a load (including his vintage Harley) anywhere, so it’s practical plus it has disc brakes to stop like a pro.

Doug said his COE, “runs down the road so straight you can take your hand off the wheel” and it easily runs with traffic at highway speed. Doug’s a retired truck driver so he appreciates the manual transmission and the rumble of the straight diesel exhaust. He wants to cool down the cab because the Cummins pumps out a lot of heat.

A 3000-MILE ROAD TRIP FROM ALBERTA CANADA TO FLORIDA DRIVING AN...