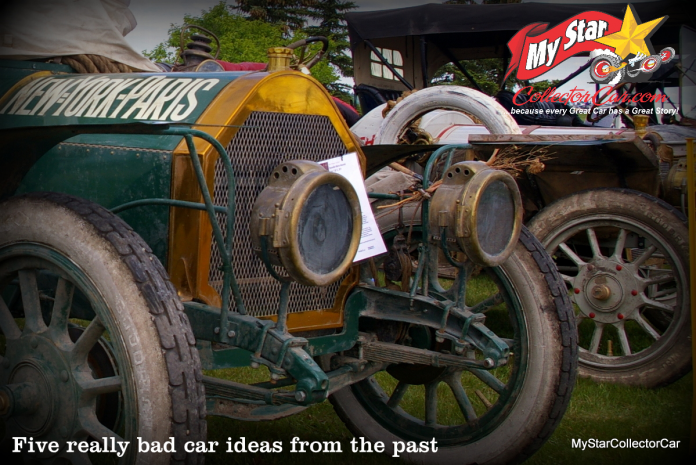 There are some historical elements of the automotive industry that beg the question: Were the movers and shakers in the car biz on cheap model airplane glue when they created these gems?

Nevertheless, automotive engineering from the past is a head-scratcher if one compares it to modern engineering in new cars. We decided to pick five ideas that were practical (and state- of- the-art) at the time, but now seem like really bad car ideas.

The first idea is the vacuum windshield wiper that was common on domestic cars during the prewar and post war eras. The idea took root in the early 1920s when Cadillac used them to replace the hand-operated wipers that required manual effort to clear the windshield during rain or snow events on the road.

The biggest problem was vacuum wipers worked off the engine speed so wide-open throttles meant less wiper speed in cars. This wiper fiasco was particularly noticeable when climbing a hill in horrible weather because the vacuum wipers would come to a complete halt when the engine was under severe load and the exhaust manifold produced no suction to move the wiper vacuum motor.

Most car guys of a certain age have experienced this Indiana Jones-level adventure at some point in their lives and were eternally grateful about the dawn of electric windshield wipers.

The second bad idea for cars was the record player. A record player in a car was probably not the best breakthrough in automotive technology, particularly if the car record player inventor did not account for motion in and around the car unit. Spoiler alert: He didn’t — or couldn’t.

The record player in a car concept died a horrible death because nobody was truly able to prevent excessive record skipping in moving cars. The happy ending is the car record player is now a highly sought-after option in vintage rides because of their scarcity due to an abundance of rational car buyers who saw no need to carve up Elvis records on a really bad turntable in their rides.

Our third choice for bad car idea was the 8-track player. These options (or add-ons) were better than a car record player, but both cutting edge sound systems were very unsound systems in a practical sense. The 8-track unit was arguably more efficient than a record player in a car-right up to the moment it ate a tape, skipped channels in the middle of a song, or (worst case scenario) got stuck on one song and played it over and over again until emotionally broken drivers steered their cars over the nearest cliff to ease the pain.

An 8-track player can still shoot chills up the spine of car guys from that era because they were a Hall of Fame horrible idea on their best day.

MyStarCollectorCar’s fourth bad idea were acetylene gas headlights. Acetylene headlights were a common feature on early cars because they were the frontrunners for drivers who wanted to travel at night. These brass-era headlight systems were a primitive and dangerous idea that won the day because they would be less likely to flame out when the car was moving on the road.

The acetylene fuel was produced in a dual chamber tank on the car with a concoction of water and calcium chloride that produced acetylene gas for the headlights when the water dripped onto the calcium chloride. The gas was then channeled to a glass combustion tube in the vehicle’s headlight and ignited for illumination.

The explosive nature of acetylene gas made its use in an early automotive headlight system both a practical and insane choice when viewed from the catbird seat of 2020, but gas headlights were the norm at the turn of the 20th century.

Our fifth and final really bad idea was the crank start on early cars. The hand crank was a staple on most vehicles from the horseless carriage phase when car technology was in its infancy.

The crank start was necessary at the time, but it likely sparked an upswing in Lefty as a nickname because improper crank starts with a right hand could lead to broken arms or wrists when the engine kicked back on the crank.

The result was a sudden collision between warm flesh and cold steel with predictable results when right-handed people used a hand crank ostensibly designed for left hand use — or gripped the device with their thumb in the line of engine misfire.