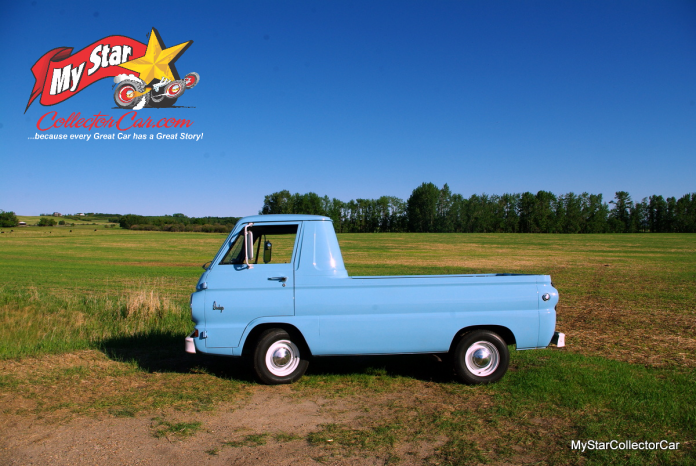 Terry has owned a variety of vehicles over the years, including a 1970 Dodge Super Bee that answered his need for speed upon request. He still has the speedy Bee, but lately Terry spends his time behind the wheel of a 1966 Dodge A-100 pickup truck still equipped with its factory 225 Slant Six engine.

Terry became the proud new owner of the unusual pickup about six years ago and has logged many miles behind the wheel since the purchase. This Super Bee owner has grown fond of the leisurely pace in his A-100 and appreciates its frugality because Terry estimates the A-100 gets about 30 MPG on the road.

Terry recalled his first encounter with a Ford Econoline from his high school job working for a business that used it as a delivery van. The unique style and driver position of the Econoline was a fond memory for Terry, so he decided to purchase a flat-nosed vehicle later in life for his own recreational use.

However, Terry is an avowed Mopar man and wanted to own the Chrysler version of the Ford Econoline, namely the Dodge A-100. Terry ended up with the pickup version, an unusual model then and now.

The unique pickup is a big favorite with kids because of its unusual style but Terry has gotten used to the enormous amount of attention garnered by the A-100 over the past six years.

Terry is interested in the history behind his vehicles and discovered his ’66 A-100 pickup was originally purchased by a feed mill in a small prairie town and used as a delivery truck by them. The pickup was sold and ended up in storage for several years before it was resurrected for the road by its third owner.

Terry became the fourth owner of the vehicle “and met everyone that’s owned it”, in his words while also tweaking the A-100 over the past few years. “I did oil leaks, changed the carb, and fixed the exhaust”, according to him. He added a stock rear bumper to his A-100 as a finishing touch.

He also noted the solid condition of the truck, including its box which is in excellent shape, likely because of its soft feed bag payload, according to Terry. He also mentioned the light rear end of the truck required extra ballast hidden under the rear metal storage/structural components of the A-100.

The truck’s van heritage as a snub-nosed vehicle where the driver sits right over the front wheels gives it an excellent turning radius, in Terry’s opinion. He is also comfortable on longer trips behind the wheel of his A-100, particularly since Terry replaced the steering box on the truck.

Terry has driven many muscled-out vehicles over the past several decades, but these days he is content to enjoy the slower pace in his very cool 1966 Dodge A-100  because “it’s too good of a truck to modify”, in his words.

With age comes wisdom in this case.