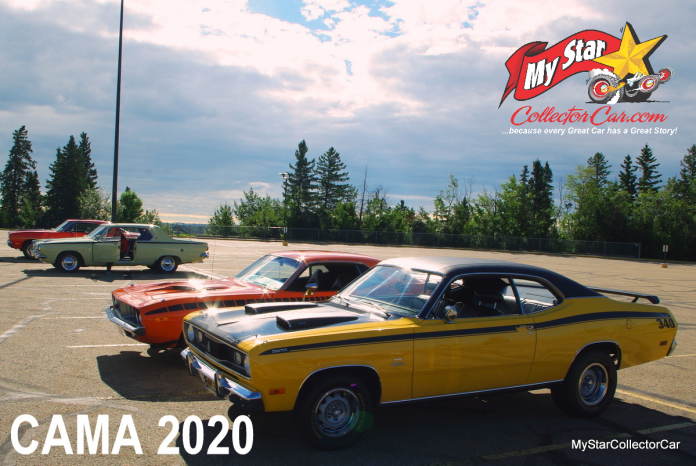 The Central Alberta Mopar Association’s theme song should be ‘I Get Around’ by the Beach Boys because the club moves their host location on a regular basis for their annual show.

Different venues add extra excitement to the CAMA (Central Alberta Mopar Association) show because they have been held in a host of locations over the years.

The CAMA crew invited some honored guests to their show, including many out-of-towners who were confident the Mopar club could pull off the event during a plague year. The COVID rules have curtailed many shows this season and it would have been understandable if the CAMA organizers decided not to proceed with their show this year.

However, the CAMA people took a careful look at the boatload of plague rules and figured out a way to comply with them so they could host their event. We at MyStarCollectorCar are grateful for their efforts and applaud them for their tenacity.

This year’s event had a few guests from the General (General Motors) and Ford in attendance to help celebrate an actual car show held during the year of the plague. However, our main focus at a Mopar show was a vehicle with a Chrysler lineage so we concentrated on the Pentastar products.

An eyecatcher that caught our attention from the moment we entered the CAMA car show area was a custom purple 1971 ‘Cuda aptly named ‘Purple Haze’ by its proud owner. Just for the record, the ‘Cuda was a variation of the second-generation Plymouth Barracuda and its shortened name indicated the car’s ability to perform tire-scorching stunts upon request.

The Purple Haze ‘Cuda at the CAMA show was a pro street version that had been massaged into a fire-breathing monster by creative forces long after it left the factory. The owner was understandably proud of his wild ‘Cuda and gave MyStarCollectorCar a solid recount of the car’s transformation into an 8-time World of Wheels winner before he even became its new owner.

He upgraded the car to perfect and MyStarCollectorCar was fortunate enough to encounter him with his ‘Cuda mere days after he completed a lengthy list of modifications to the car at a local speed shop. Look for the complete story behind this 1971 ‘Cuda in a future MSCC article.

One of the more compelling reasons for a story is an emotional connection between an owner and a former owner is a strong family link. A 1986 Dodge 4×4 truck also caught our attention at the CAMA show because its second owner was the current owner’s grandfather.

The grandfather was very attached to the truck and only sold it because he retired as a farmer and moved into town. His grandson was able to track down the ’86 Dodge pickup and purchase it, although sad circumstances prevailed at the time. Read about the truck’s legacy in one family in a future MyStarCollectorCar feature.

The final addition to our 2020 CAMA chronicles is a 1972 Dodge D-100 4×4 with another long legacy in one family. The truck was originally purchased by Canadian Western Natural Gas (now part of the Atco company) and spent a few years with Canadian Western before its current owner’s extended family became the second owners of the Tin Grille (1972) Dodge.

The ’72 Dodge pickup is a work in progress for its young owner (a car guy who wasn’t even born when the truck left the factory) because he wants to bring the truck back to its original glory through a careful research process.