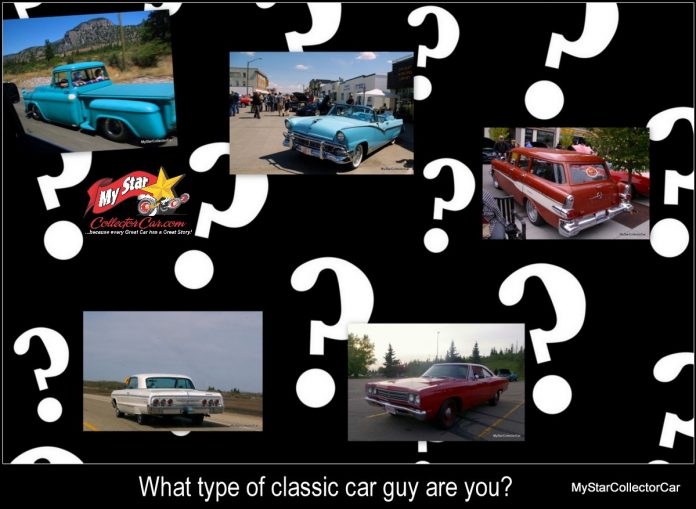 There are plenty of online quizzes that pretend to analyze people with questions that allegedly determine the participants’ inner selves.

The online personality tests usually paint a creative, flattering and largely inaccurate picture of the person who takes the test but, in fairness, the quizzes are typically designed to feed the fantasy and egos of the quiz-takers.

It may be true there are no Harvard clinical studies in our questions and answers, but we believe the real-world car hobby has provided an excellent lab for our research over these many years. You be the judge.

The first question: Are you a convertible car guy or girl? The traditional convertible has largely left the building with Elvis behind the wheel in the hearts and minds of 21st century manufacturers, but there was an era when a domestic convertible was a big-ticket item for their fans. The owners were bold, impractical, and adventurous, particularly if they used the car for winter transportation in bone-chillingly cold regions of North America.

The open-air freedom of a classic convertible most assuredly speaks to the owner’s adventurous side in our test.

The second question: Are you a hardtop car guy or girl? If so, you lean toward a sportier philosophy in life when it comes to the car hobby. A hardtop had no B-pillar (the roof post between the front and back seat) and provided a cleaner open air look for the owners-with the added benefit of a metal roof-thus the hardtop term.

The owner of a vintage hardtop loves the express lane in life and is willing to invest in the go-fast style of a hardtop, particularly one with only two doors. The back seat of a vintage two-door hardtop was ceremonial at best in most of them, but the big-ticket item is the style of a two-door since less doors adds up to more coolness in their owners’ genetic codes.

The third question: Are you a two-door post (big B-pillar between front and back seat) car guy or girl? The original two-door sedan owner was likely an unrepentant cheapskate who did not even want to spring for two extra doors, so MyStarCollectorCar will look beyond the original owner traits and head right toward today’s owners.

Today’s two-door sedan owner loves the B-post because it adds to the structural strength of the car, plus this model style also eliminates two unnecessary doors in their ride. The modern owner of a vintage two door sedan embraces the Tim-the-Toolman “more power” approach to his car and will add brute force under the hood. They are practical enough to embrace the inherent sturdiness of a post car, but hate the idea of two extra doors, so they lean heavily toward their inner wild child with a fast and furious two-door post.

The fourth question: Are you a station wagon car guy or girl? It is no secret that station wagons were once kings of the road on North American highways, but their original buyers were likely distraught parents who had abandoned any hope they would become interesting people, given the fact the wagon fit so well into their practical family life.

The fifth and final question: Are you a vintage truck owner? There are few vintage vehicles on this planet that make a personality statement like an old pickup in today’s world. The image of a fiercely independent renegade has always been a part of the old truck mystique. For starters, they are not even a car, they are more like a trusty old steed for their owners, even if their owners grew up in the suburbs.

Old trucks have always been an important part of country music songs and lone wolf characters in movies because of their strong association with people who do things on their own terms, so vintage pickups are a natural fit with modern owners who subscribe to the same values in life.