The new 1973 car models hit the dealerships in late 1972. The Apollo space program would close its doors shortly before Christmas 1972 as the last joy ride to the moon.

And it was fondly remembered as the magical time before disco broke a musical two by four over our heads.

But a two by four was broken over Detroit’s head for the 1973 car models.

All 1973 cars were required by law to have bumpers that withstood a 5 mph crash.

It was a simple idea, but it threw a curveball at US carmakers because the bumpers looked like big ugly orthodontic braces on most of the car models. 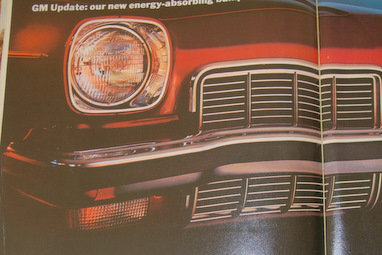 The look of the 70s for Detroit’s finest had begun to evolve into its own distinctive look, complete with a distinctive flow that ensured few people would mistake the cars for their 60s predecessors.

Nonetheless, the cars were presented to the public as cars with an added bonus in the bumper department. Most buyers were probably happy with the idea of a bumper that could take a solid left hook from a 5 mph crash. 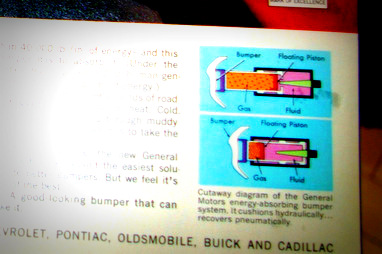 But the look of a hastily added bumper was less appealing to 1973 car guys who liked the 70s look of the cars-until they saw those massive state-mandated bumpers. It was a little like a 1973 Raquel Welch in a brush cut for many car guys.

Eventually bumper cars and their bumpers had a happier marriage but, in 1973, it was a big reach for General Motors to place this ad in a Car Craft magazine. ” First you’ll love how good it looks. Then you’ll love how well it works.” 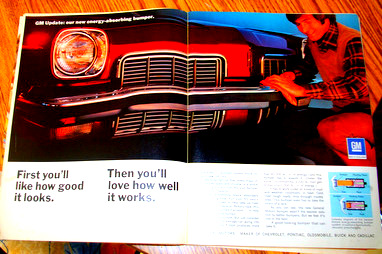 The General’s ad about the new bumpers was the biggest piece of fiction outside Nixon’s interpretation of his role in Watergate in 1973.

But what was a poor car company to do under these conditions? They had their marching orders about the bumpers and had to put their best spin forward in their ads.

Thus this ad that relied upon an our-gift-to-you spin by GM. Undoubtedly all of the US car manufacturers would loved to have tested their new 5 mph bumpers on the legislators that dreamed up this gem-only at about 70 mph.

But instead they applied as much lipstick as they could to this pig in ads like this 1973 General Motors example in Car Craft magazine.

Literally hundreds of other stories at– https://www.mystarcollectorcar.com/