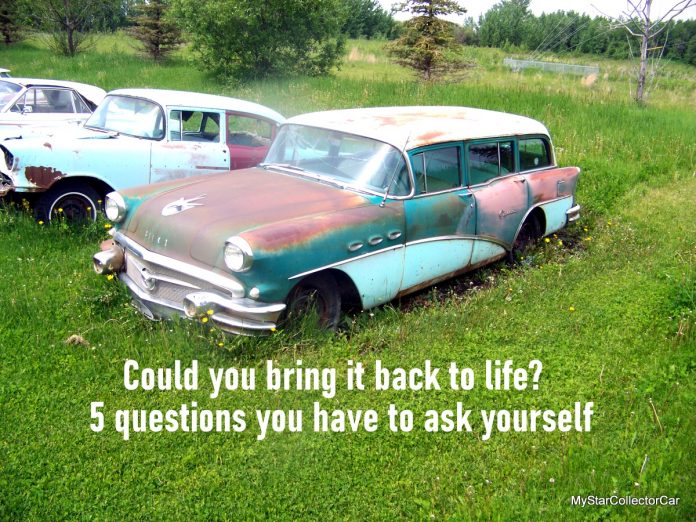 A car project is one of those tasks that require plenty of thought in that all-important “look before you leap” sense.

The first question is pretty simple: What is the basic game plan for your project? Do not attempt to proceed if you have no idea about the direction of your project. Will it be a street machine, track machine or a pampered four-wheeled bauble at a car show? The answer will be critical to your game plan because your decision will reflect heavily upon the amount of time, effort, money (and possibly even spouses) your project will cost you.

Which brings us to our second question: How much are you willing to sacrifice for a project? Most car projects run well past their budget and deadlines to completion, it’s a grim fact of life in the hobby.

In between are endless moments of frustration, gnashing of teeth and open season on the car guy’s wallet. The light at the end of the tunnel cannot even be seen with a Hubble telescope at this point, so car guys need to get used to a world of soul-crushing anguish and potential divorce before a tiny dot of light appears in their project.

The third question is also fundamental to a successful car project: Do you intend to drive it? Bear in mind a 200-ft trip from the back of a trailer to the show is not driving the car, even in the loosest and hallucinatory sense of the concept.

Fortunately, most car guys want to drive their prized possessions after the project’s completion because most of them rightfully believe they earned the right to drive them after the painful process described in the second question.

The fourth question ties in neatly with the first and third question: Will your finished project be ready for the street, strip, or car museum?  This is a dicey question because the old cliché (“You can’t have everything”) definitely applies to a car project.

For example, a car guy should consider the gear ratio on his project vehicle since a 4:10 rear end will provide solid performance in a quarter mile, but low gears will have the cars’ engines begging for mercy before they die a horrible death on long distance highway trips.

The fifth and final question is an important follow-up to the first question: What kind of car project works best for you? Will your trip down memory lane be represented best by a restoration process that takes the car back to its factory roots or will it include 21st century updates that push it into resto mod or even pro touring worlds?

Some car guys love the retro style of a vintage ride, but they are not in love with the old school engineering behind them. They don’t embrace their old cars’ original 98 lb. weakling engines, vague steering and mushy brakes, so they upgrade them to modern standards to drive them. Others love the old school factory engineering found in the original restoration process.