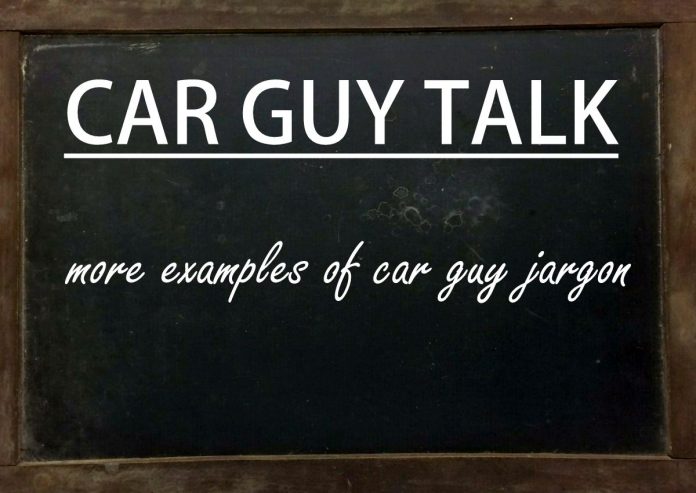 This is number five in MyStarCollectorCar’s series of interpretive car guy jargon.

The basic reason for our cheap automotive knockoff of the Webster’s Dictionary approach is some of the car hobby terms may seem like Swedish or Swahili to a few of our readers, so we jumped into the car lingo interpretation game. We want to help our readers avoid the trauma of blank stares and unknowing nods when car guys lapse into car-related jargon, so MyStarCollectorCar added another article to our interpretive series.

The first word on our list is “dual quads”, a term that has nothing to do with steroid- exaggerated muscles in juice monkey world. A dual quad is a twin carburetor system on a vintage engine.

The extra carb provided more fuel delivery to the engine and was a big power boost to big blocks during a bygone automotive era. The upside was the increased power curve, the downside was to get the carbs to synchronize better than drunks in a line dance at a country nightclub at 2 in the morning. It was a tall order that still requires Merlin the Mechanical Magician.

The second word on MyStarCollectorCar’s latest edition of interpretive car guy-ese is “rock crusher”. This term does not only apply to legendary Slate Gravel employee Fred Flintstone–it also applies to the Muncie 4-speed manual transmission used by General Motors during the early 1960s and into the 1970s.

A Muncie 4-speed transmission was nicknamed the rock crusher because it was able to handle the extra power produced by GM’s muscle cars during the Sensational Sixties, a trait that became lost on the neutered engines built to comply with 1970s-era automotive legislation during the Me Decade.

A rock crusher Muncie 4-speed manual transmission is a highly desirable feature in the vintage vehicle hobby, mainly because of its legendary performance during the rise of the muscle car era in the 1960s. To own a vehicle equipped with a rock crusher is to love that vehicle for GM car guys.

The third word on our list is “no-post”. The term refers to the hardtop versions of vintage domestic cars and is one of the most desirable versions of the vehicles. “No-post” means no pillar between the front and rear quarters of the car like a base model sedan version.

Hardtops were originally labeled “hardtop convertibles” because they were designed to offer more exposure to fresh air-without the leaky non-metal roofs found in convertibles. A sedan version with the middle post (called a B-pillar) was more practical and more plentiful because of their lower price tag, but had less curb appeal then and now in car guy world.

Our fourth and final addition to the car guy language interpretation list is “lumpy cam”. This car guy term may be a head-scratcher to some MyStarCollectorCar readers who may believe it refers to a fat guy named Cam, but it’s a performance camshaft in an engine.

The camshaft in a typical engine is designed to provide a smooth idle at lower speeds through its interaction with the engine’s valve train system, consequently it’s known as a “mild cam”.

A race cam is engineered to provide optimum performance at higher RPMs because its lobes have a different range of engagement with the valve train, so a race cam will produce more power when the engine starts to scream. The tradeoff is the race cam makes an engine sound like it’s ready to die and head to the big garage in the sky at low RPMs, one of the reasons ¼ mile car guys use stall convertors to get the revs up before they launch down the track.

The race cam’s ready-to-die-at-low-RPMs sound has been labeled a “lumpy cam” by car guys, but the noise is a badge of distinction in hot rod circles.