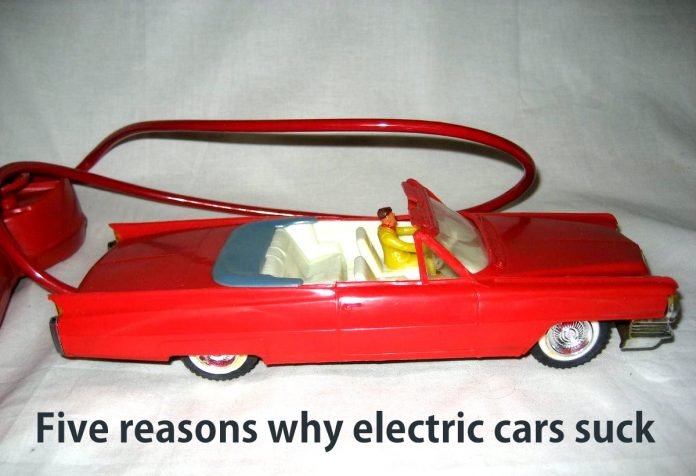 The present is a huge push/fantasy to make the electric car become the number one choice for personal transportation needs-despite the obvious problems with the idea.

The future is a world where no rocket scientist can defeat the immutable laws of physics and create an efficient electric vehicle for the masses, despite massive government subsidies to keep this pipe dream alive.

MyStarCollectorCar would like to give five basic reasons why we hate electric cars.

The first reason is we like to travel more than a couple of hundred uninterrupted miles to get to our destination when the situation warrants it. Electric cars have a limited battery range that falls well short of many drivers’ goal destinations. The basic reason is nobody has been able to invent a battery that can hold energy long enough to go the distance on a longer car trip.

This important but grim reality undermines our second reason to hate electric cars: recharging time. A home charging system is expensive, complicated and will take hours-not minutes-to fill up the electric car with lightning juice. An expensive quick charge on a long-distance trip will still take you off the road for at least 20-30 minutes if you can find an outlet that provides this service.

The third reason is electricity does not grow on trees. It is a scarce commodity made even scarcer because heavily subsidized and inefficient green energy programs do not provide enough power to handle the current electrical load-let alone a future large herd of electric cars. The same storage issues that dog the car batteries also handcuff the large green energy producers because they rely heavily on sunny or windy days for their contribution to the electrical grid.

The fourth reason is also weather related because we live in a northern climate, complete with bone-chilling winters. Our experience includes many instances where car batteries cannot handle the cold and will not even turn over an electric engine starter-let alone an electric motor. Cold weather is a mortal enemy of batteries, so expect an electric car to encounter huge distance reductions in -40 weather. Hopefully these electric cars will be able to get their owners at least halfway from Point A to Point B during a severe cold snap.

The fifth and final reason for our electric car hatred is the electric car revolution is pure fantasy destined to be a colossal and expensive failure that will not save a planet. Currently there are no solid measures to recycle the massive batteries required to power an electric car once the batteries outlive their usefulness. Instead, they are simply slipped under the garbage dump carpet in an underdeveloped country with no rules against the improper storage of hazardous materials.