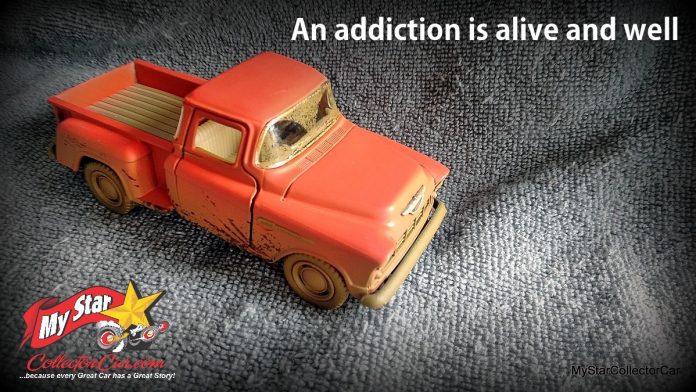 The car hobby is an addiction–most car guys’ wives will agree–but what you might not know is how it spawns other addictions like model cars.

They ambushed me on this, because my shields were down when I spotted this weathered, dusty, real-world model truck taking up space on a shelf where boxes of cereal usually sit. Weak guys like me with lingering addictions are easy prey for this kind of trap.

The grocery store showed no mercy with this dusty little model because if this ’55 Chevy had shiny paint, I would have skipped by it faster than a kid skips by a scary old, abandoned house on Halloween. The real-world dirt and rust scale model is my crack cocaine.

My model car addiction goes back to my childhood, but it hibernated when I discovered women, beer, and parties. It resurfaced in the early 80s when I learned I could buy vintage dealer promotional models of weird cars like ’59 Dodges and Plymouths.

This was the pre-Internet era so you couldn’t see the stuff you bought–instead you had to rely on the honesty of strangers. That’s how I learned these old promotional models warp, but they’re still cool in 2022–warpage and all.

One–I had more patience in the world of model building than I did when I was 12, and Two–picking up a model car after a dozen shots of tequila qualifies as a very bad idea. The car Richard Petty turned end over end at the 1988 Daytona 500 looked better. In my defense–I did put the model back together, but it was never the same. Nothing ever is the same after 12 shots of tequila.

I went on a binge in the 90s with a big focus on fin cars, so I ended up with a fleet of them (all sizes and shapes). I was what you would call a mild addict because I never thought about model cars all the time, but I could never pass by a fin car I saw one on a shelf. Trust me, that’s a boatload of fin cars.

There were other toy cars in that decade, including a Volvo 544, because I started looking for personal connections to these models and I did own a ’61 544 in high school. This was a good way to justify an addiction because you can tie them to your past and call it nostalgia.

The Richard Petty collection grew too because he put out a series based his racing history, so some odd ones turned up in the collection. I didn’t get them all, but I did accumulate a few.

The last stage of the personal connection to the model phase came between 2000 and 2007 when I had a guy who worked for me at the time build some cool derelict models. He had talent and he built them for a few bucks and a few beers–that was a magic combination.

One was a model of my brother Jim’s old Duster.

The other was a derelict Christine tribute.

That was over ten years ago and I’m proud to say I’ve been model car free for all that time–up until a few weeks ago when that little truck cranked up my addiction again.