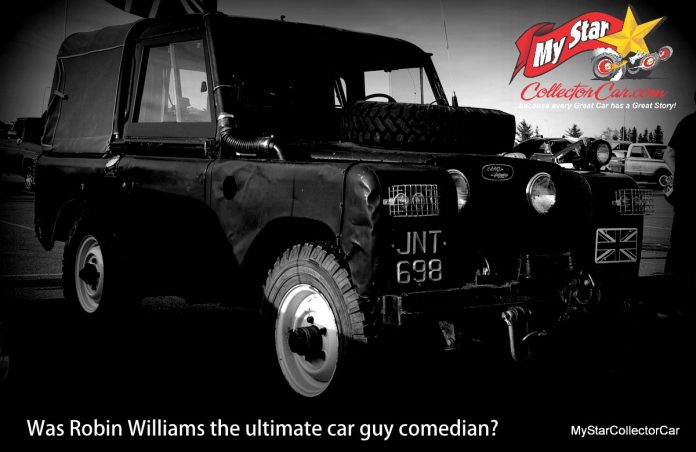 Jay Leno, Tim Allen, and Jerry Seinfeld are three famous comedians with massive, high-dollar car collections but are they the most hardcore car guys in the world of comedians?

I don’t think so–that honor belongs to an unlikely candidate–the late and legendary Robin Williams because he had this famous quote.

I just finished reading a book about Robin Williams–he made that statement shortly after he landed in the big time with the TV series ‘Mork and Mindy’. He’d just hit the stratospheric Hollywood money zone, so people wondered why he drove a beat-up ’66 Land Rover instead of a brand-new Ferrari. That was his answer.

Robin’s answer is one every car guy understands because it’s so simple. There is no magic in new cars–he understood that back in 1979 when he could have rolled up in a brand-new Rolls Royce instead of a beater Land Rover.

Williams had it figured out. An old car is an extension of your personality–a new car is a grim reminder of how boring you and your life have become. That “happen next” part is a huge part of the equation with old iron because you may be a mile away from a catastrophic transmission failure, but you’ll never see it coming.

Your new car will tell you about your wonky transmission two years before it happens, plus it will nag you about low tire pressure and changing your air filter. In other words, you only have yourself to blame if your new car goes up in a puff of smoke.

Robin Williams was an unpredictable guy–his whole comedy act was based on that foundation. That’s why he had to match his personality with that of his chosen daily driver–a ’66 Land Rover. Land Rovers from that era were rugged and often saw duty in places where roads barely existed–that rules out Los Angeles.

I can imagine Williams daily driving on an LA freeway in a vehicle with an optimistic top speed of just over 60 miles per hour. I can’t imagine Jerry ‘Mr. Porsche’ Seinfeld doing the same thing. That’s the difference between car guy and car collector.

Williams wasn’t a declared car guy like Leno, Allen, and Seinfeld–he was more of an intuitive car guy because he lived the car guy lifestyle without any fanfare. That ’66 Land Rover speaks volumes about his commitment to the car guy cause.

There were many moving parts to Robin Williams life because he was constantly in motion. The twist is found in how his car choice played out–the guy with the fast-paced lifestyle drove a used Land Rover that could barely crack the minimum entry speed on Southern California freeways.

Robin Williams drove that battered old truck despite the fact he could have plunked down cash in any dealer and driven away in anything from a brand-new Lincoln to a brand-new Lamborghini.

WELCOME TO THE COOLEST NEW CAR SHOWROOM IN THE KNOWN UNIVERSE