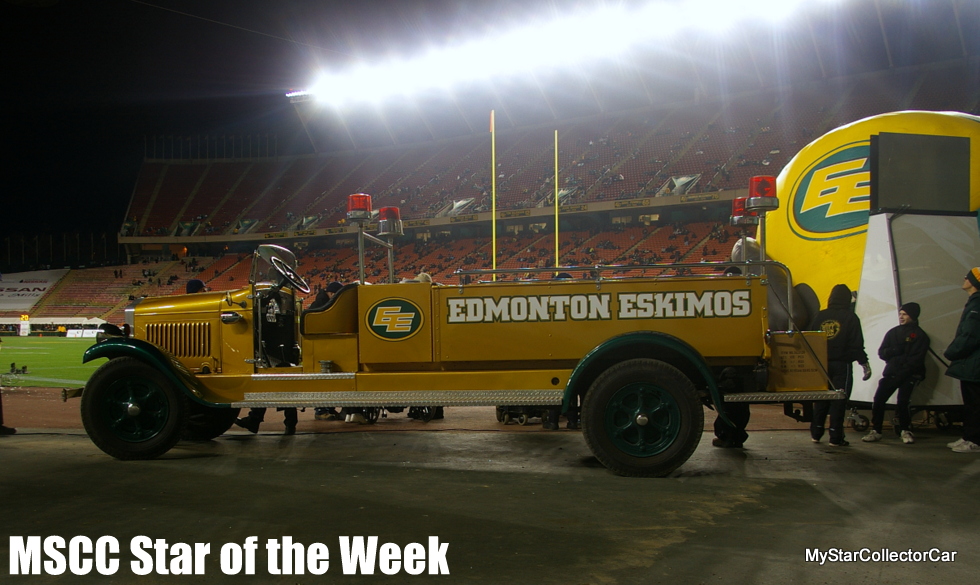 Today marks the 103rd Grey Cup and the Ottawa Red Blacks will duke it out with the Edmonton Eskimos for the right to hoist an old and storied championship trophy.

‘Those of you who are unfamiliar with the CFL (Canadian Football League) are probably surprised to learn the oldest trophy for professional football is found north of the border in the land of hockey and curling.’

The Grey Cup is a national party and it encompasses many traditions that only Canadians truly understand and each team in the CFL has its own traditions at the home games.

This MSCC Star of the Week is the vintage White LaFrance fire truck that circles Commonwealth Stadium every time the Eskimos score a TD—Grey Cup is here. 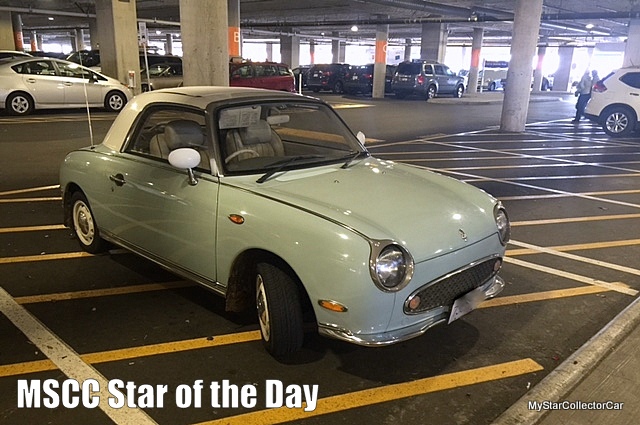 MSCC NOVEMBER 28 STAR OF THE DAY: FROM THE “WHAT THE HECK IS THAT?” FILES

Decades really tell the story with cars because over the years they really changed in ten year increments with one exception.
World War II really put the brakes on style for about 7 or 8 years so a ‘41 Chevy looks a lot like a ‘48 Chevy.

‘After that there was an explosion of designs that really defined a decade so a ’55 Fords were extremely outdated by 1964—the ’64 Galaxie had space age hip style on a car lot while the ’55 Ford looked like something Fred Flintstone traded in.

Change was inevitable in car design except for quirky cars like this rare 1991 Nissan Figaro because its build date sure didn’t match its 50s style. 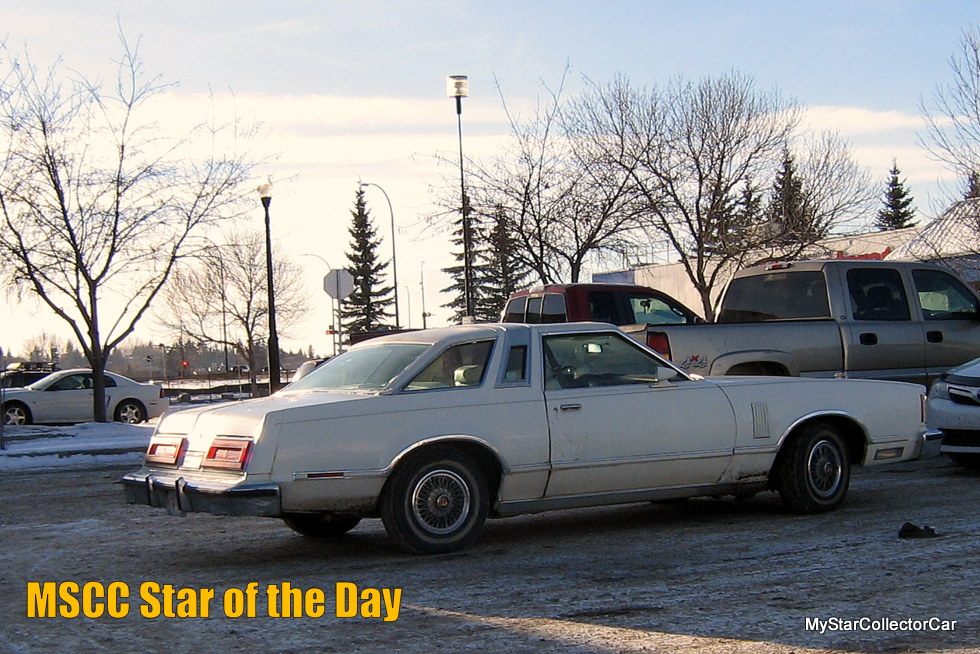 MSCC NOVEMBER 27 STAR OF THE DAY: FORD THUNDERBIRD—LIFE IS A YEAR ROUND CAR SHOW

The spirit of adventure dies in most car guys with the first snowflake.

‘Fortunately there are the outliers who drive old iron 365 days of the year because they provide relief from the chronically boring new rides and they show a level of courage that’s dying in today’s bubble-wrapped world where we conform to what’s comfortable and avoid what’s potentially risky.’

This MSCC Star of the Day is the guy who owns this T-bird because he’s got the stones to drive this beauty and prove life is a year round car show. 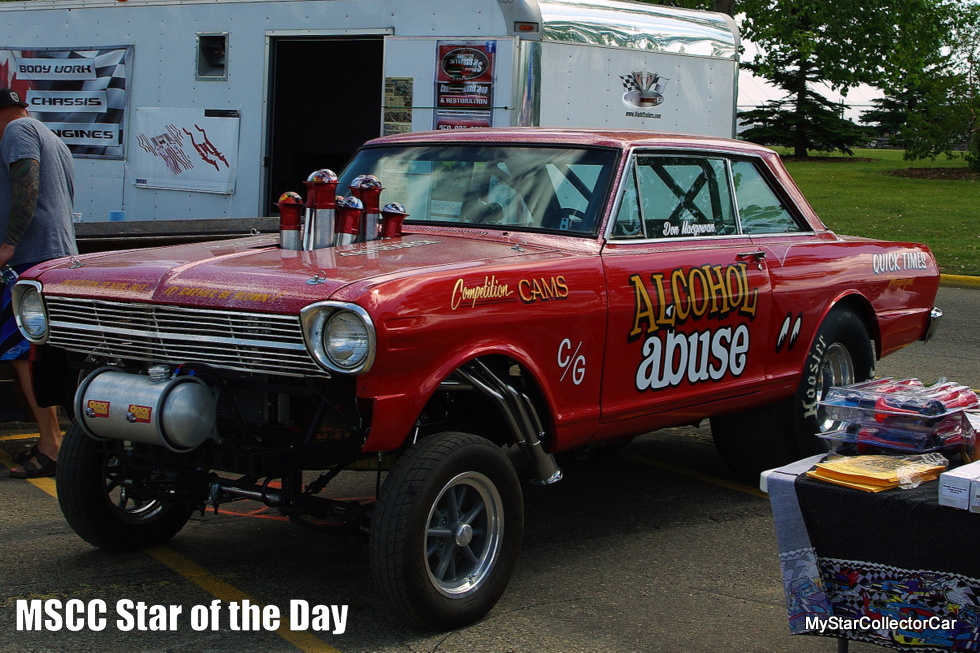 MSCC NOVEMBER 26 STAR OF THE DAY: NOVA GASSER—COOL WHEN PARKED, HOT ON THE TRACK

They were drawn to these track monsters because Gassers were some of the coolest track cars ever built for the sole purpose of a better ET.

‘Gassers were built because of the rules but in reality, they looked like the builders threw the rule book away and just wanted a tough-looking, fast ride.’

This MSCC Star of the Day Nova at a show last summer was a great example of the “look cool when parked, hot on the track” Gasser philosophy. 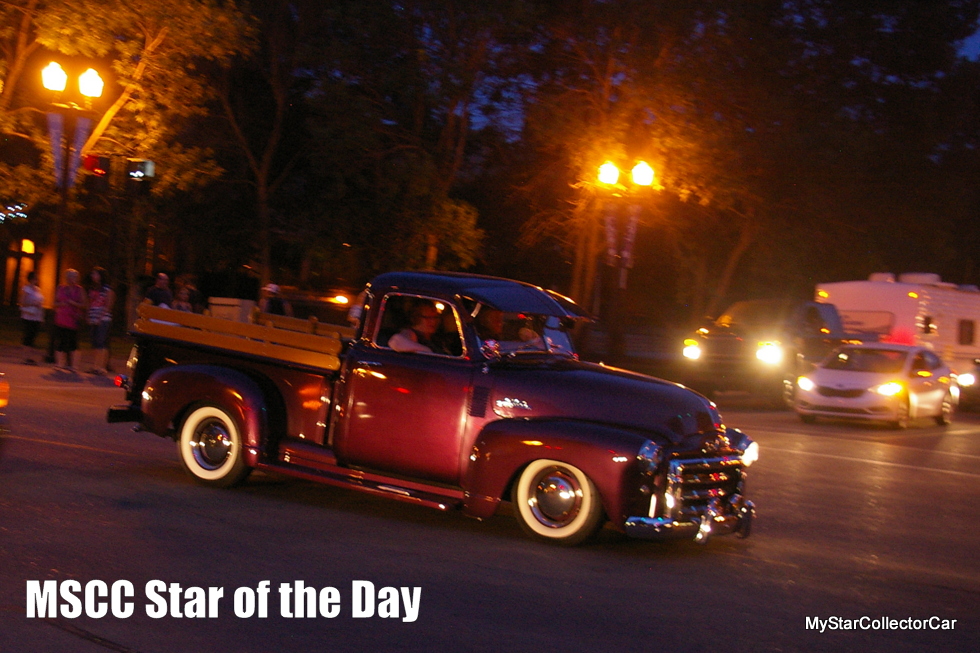 MSCC NOVEMBER 25 STAR OF THE DAY: WANT TO BE COOL AT NIGHT? DRIVE AN OLD TRUCK

Neil Diamond nailed when he sang “Thank the Lord For The Night Time” back in 1967.

“Daytime turns me off and I don’t mean maybe nine to five ain’t takin’ me where I’m bound…We got groovin’ when the sun goes down”.

The same logic applies to what you’re driving when the sun goes down.

It gets a lot cooler when you’re driving an old truck like this MSCC Star of the Day (and Night). 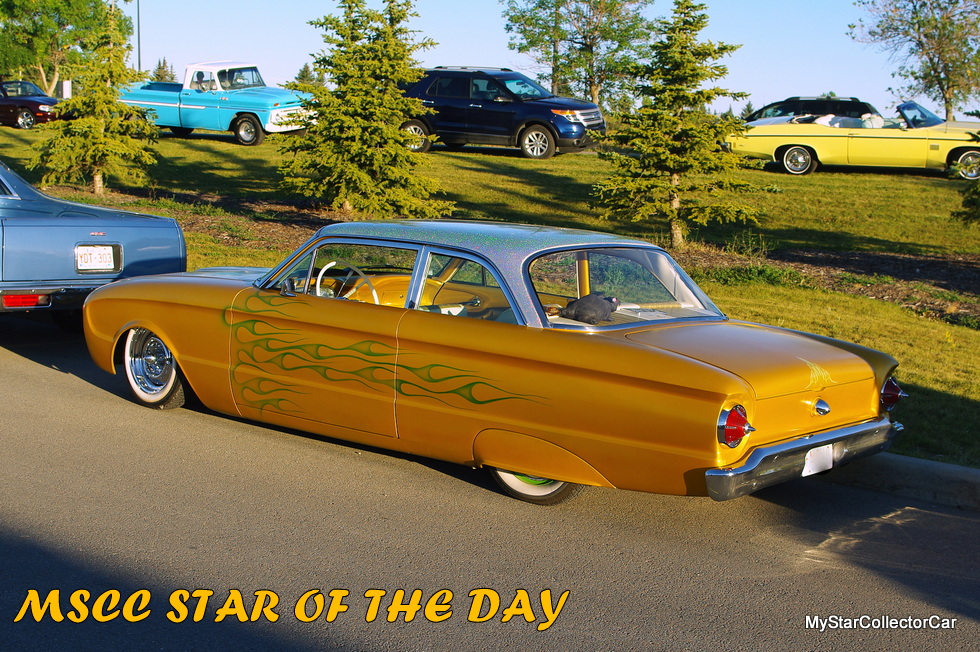 The beauty of the custom car is the unlimited possibilities.

Nothing is impossible in the world of customs and there is no such thing as an unusable canvas.

Not many opt for less typical customs like this MSCC Star of the Day Ford Falcon at a 2014 show. 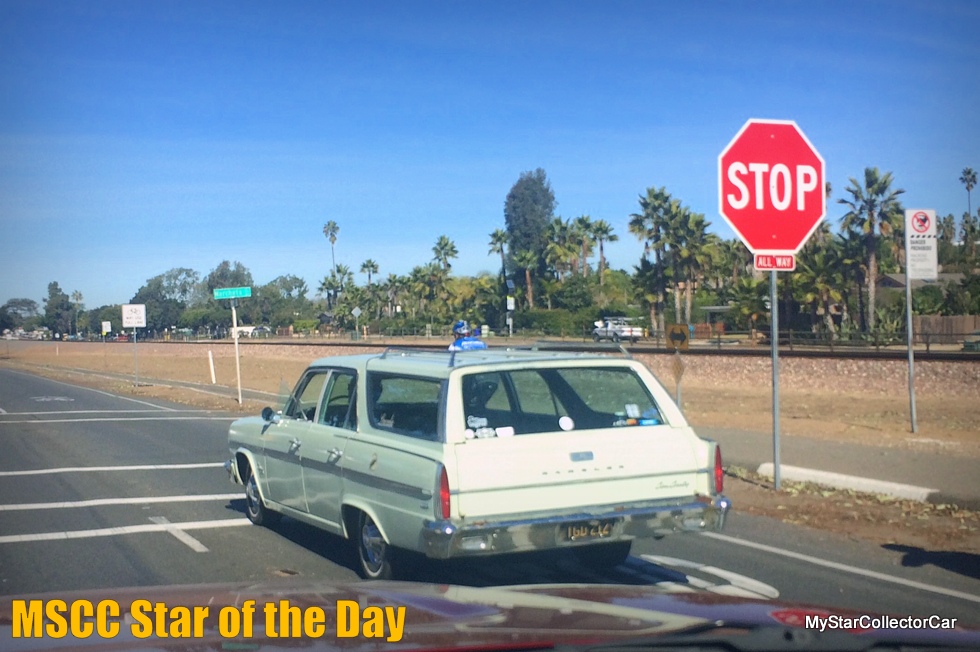 MSCC NOVEMBER 23 STAR OF THE DAY: RAMBLER CROSS COUNTRY—A LOT OF KIDS REMEMBER THE BACK SEAT OF THESE

Once upon a time there was the station wagon.

The station wagon (for reference purposes) was an all-purpose vehicle based on a passenger car but with an extra cargo area or seat instead of a trunk.

‘They were the workhorse of the average family—unloved, but practical and necessary during the Baby Boom era.’

This MSCC Star of the Day is a Rambler Cross Country because a lot of former kids remember the back seat of cars like this.

NOV 24 STAR OF THE WEEK: GAINERMOBILE-A CORONA WITH THE...