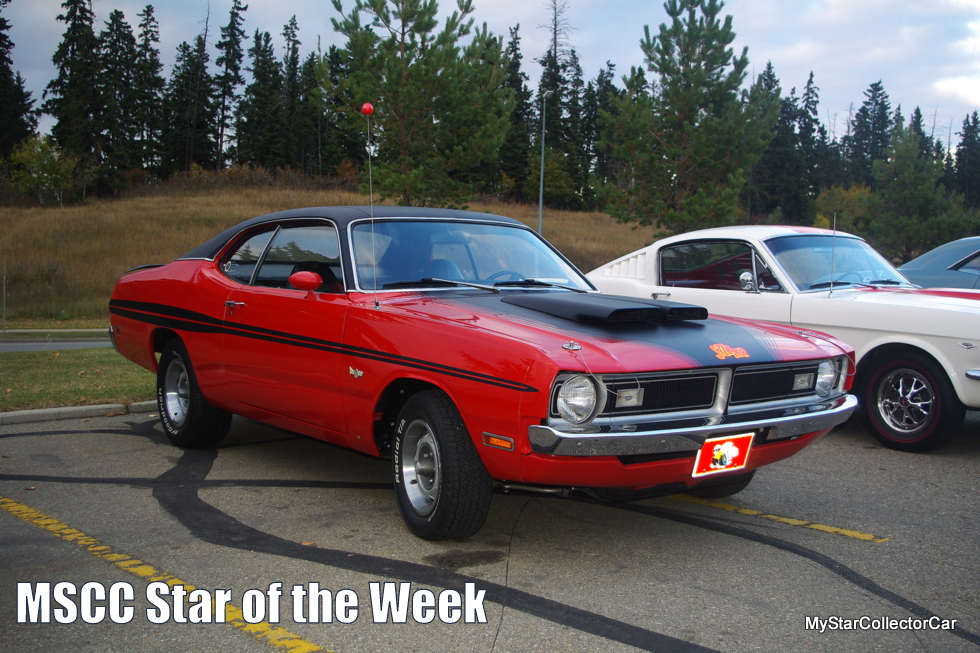 JANUARY 10 STAR OF THE WEEK: DODGE DEMON—THE CAR WITH THE NAME THAT WAS TOO HOT TO HANDLE

The Dodge Demon debuted in 1971 after Plymouth enjoyed some strong sales with their low-end muscle car –the Duster.

These A-bodies were entry level rockets because their light weight matched up well with the optional 340 under the hood.

The Demon survived two years before a lobby group objected to the devilish connotations of the name so Chrysler changed the name to Dart Sport in ’73 to appease the people who lost sleep over a simple brand name for car.

This MSCC Star of the Week is a Dodge Demon at an October 2012 show—the car with the name that was too hot to handle. 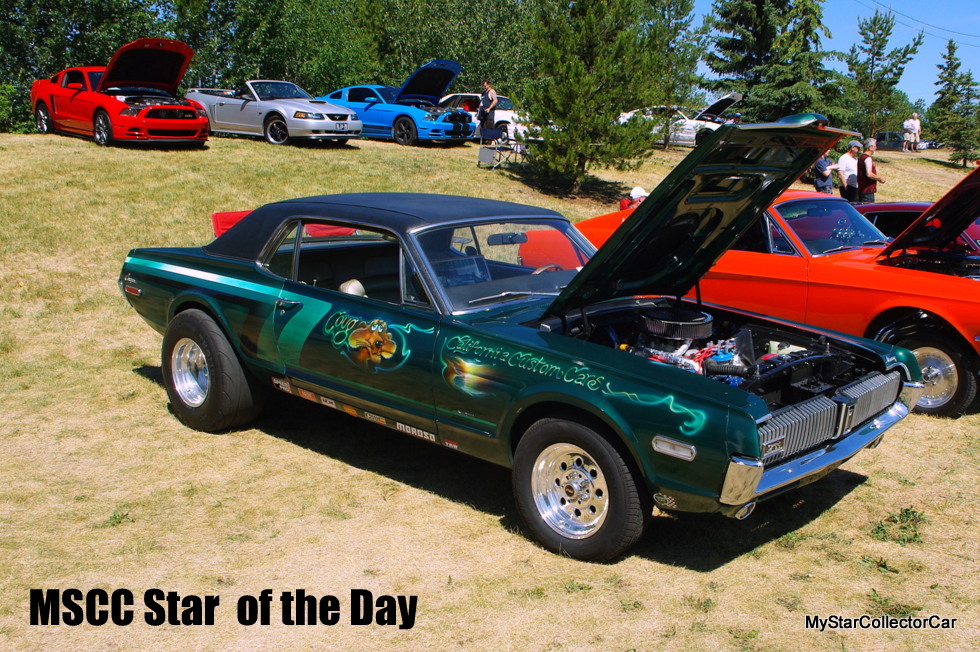 The Mercury Cougar was built for customers who were a notch up on Mustang buyers.

Cougar buyers wanted the cool factor of a pony car but the comforts of a Lincoln so the Mercury dealers filled that gap.

‘Mustang buyers were the T-shirt and blue jean crowd—a younger demographic—while Cougar buyers were a bit older and settled in life as professionals so a suit and tie was the uniform of choice for these upscale pony car fans.’

This MSCC Star of the Day is an amped-up Cougar at a 2015 show—the Mustang’s suit wearing cousin got a little street credibility. 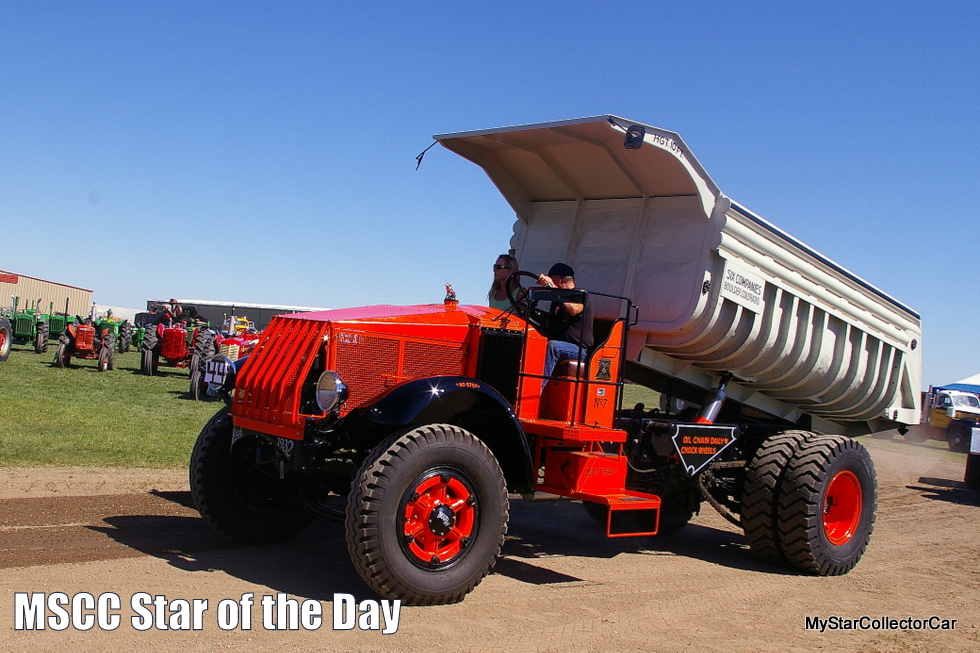 JANUARY 8 STAR OF THE DAY: ’32 MACK—WHEN ON THE JOB MEANT ALL WORK AND NO LUXURIES

The construction world is still a tough way to make a buck.

Long hours, seasonal work and battling the elements are all part of a day in the blue collar world.

‘The work is basically the same but technology has meant huge improvements in safety and working conditions on job sites so today’s trucks offer better seats, climate-controlled cabs, satellite radio, and better sound insulation from the rigors of hot or cold job site.’

This MSCC Star of the Day 1932 Mack goes back to the Depression era when a job was gold so the trucks were all work and no luxuries. 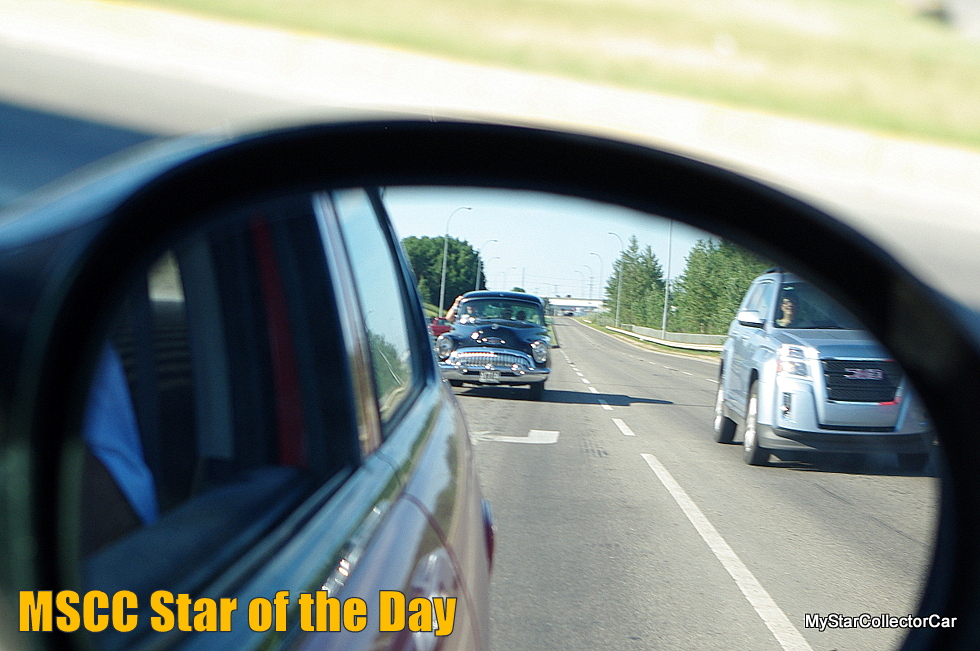 JANUARY 7 STAR OF THE DAY: ’53 BUICK—THAT GREAT FEELING YOU GET WHEN YOU CHECK THE REAR VIEW MIRROR AND SEE OLD IRON
Good drivers are constantly checking their rear view mirrors.

‘The good drivers who check their rear view mirrors see a lot of routine stuff like big trucks, little trucks, minivans, SUVs and new sedans so their efforts to be aware on the road pay off in safety but there’s no magic in most new iron.’

This MSCC Star of the Day ’53 Buick captures that great feeling when you check your rear view mirror and see some vintage old iron. 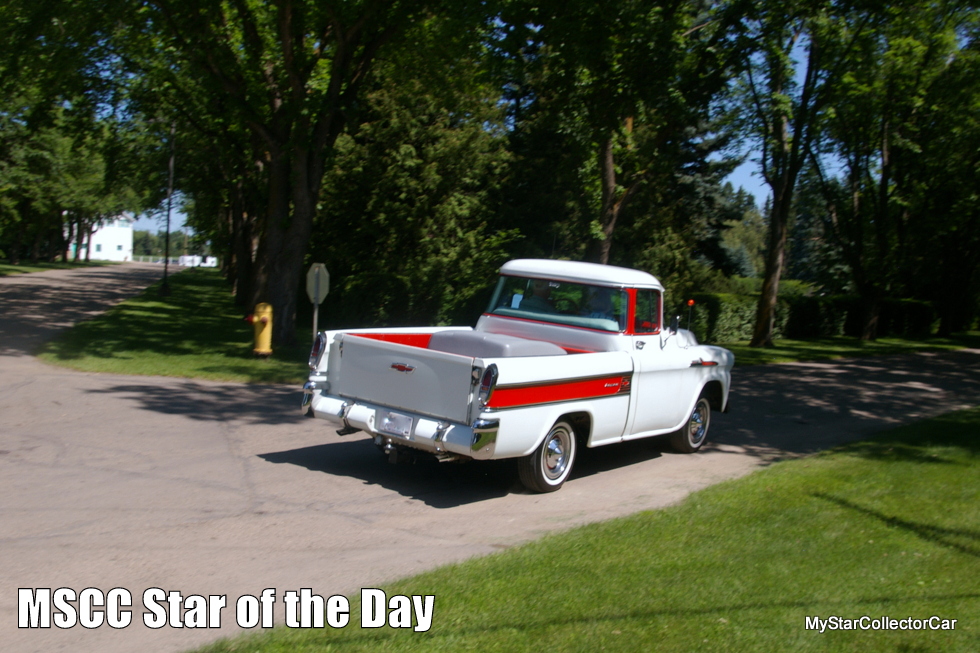 JANUARY 6 STAR OF THE DAY: ’58 CHEVY CAMEO—FROM THE BARN TO THE COUNTRY CLUB

Chevy came up with a unique concept back in 1955 when they gentrified the lowly pickup truck and made it look nice and tame for city slickers.

They knocked the blue collar out of the truck and turned it into a citified ride with a large payload.

‘Before that the pickup truck was linked to guys who pitched hay bales for a living, shoveled gravel for a living, loaded lumber for a living—basically any job that got your hands dirty was associated with a truck so they didn’t need to be fancy.’

This MSCC Star of the Day ’58 Cameo changed the dynamics of the pickup because they made the transition from the barn to the country club. 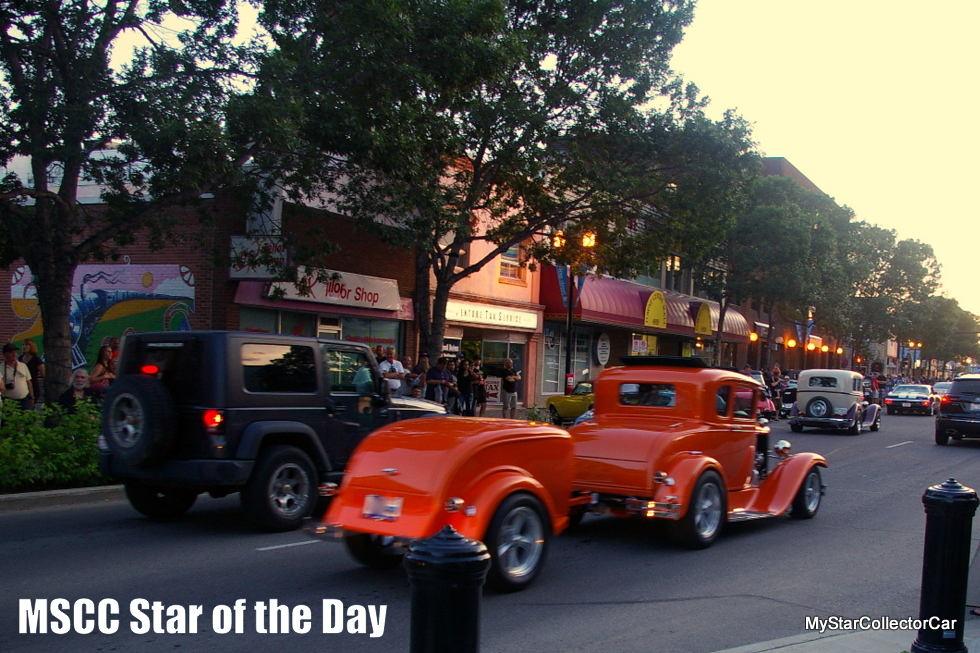 MSCC JANUARY 5 STAR OF THE DAY: ADD A TRAILER TO A HOT ROD AS PART OF THE PITCH

There is one constant in the old car hobby—practical is at the bottom of any checklist for old iron.

‘Hot rods are among the least practical because most of them are loud, over-powered, rough riding, windy, narrow, they leak water like an old umbrella, they’re drafty, you don’t much room for extra stuff and they attract police like moths to a light.’

Most car guys have a hard time pitching those features to a reluctant bride.

This MSCC Star of the Day is a trailer behind a classic rod—use the extra room as part of the pitch. 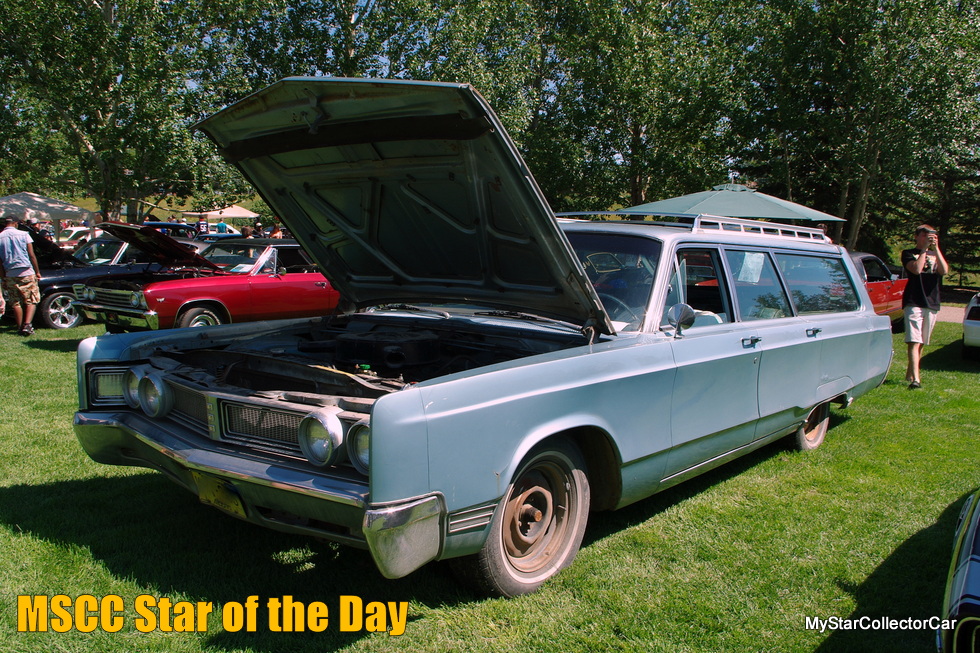 MSCC JANUARY 4 STAR OF THE DAY: ’67 CHRYSLER WAGON—THE REALITY BEHIND THE SUMMER OF LOVE

1967 was known as the Summer of Love thanks to the hippie movement—primarily on the West Coast and specifically in the city of San Francisco.

Hippies were a friendly bunch and they preferred old buses or vans to haul their fellow hippies to whatever local Love-In was scheduled on whatever day back in ’67.

‘Hippies were cool and they lived what could be charitably called an irresponsible lifestyle based on sex, drugs and rock and roll but in 1967 most people held jobs, raised families and the closest they came to a Love-In was via TV or newspaper reports—and they drove realistic vehicles—not flower power rides.’

This MSCC Star of the Day is ’67 Chrysler—the reality ride during the Summer of Love.
.