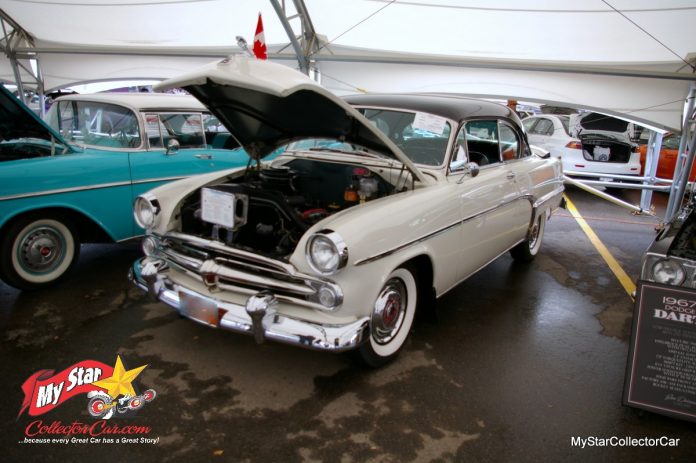 The 1954 Dodge Mayfair was a Canadian-built vehicle with heavy Plymouth influences because it shared its basic platform with its Chrysler stablemate.

The Canadian Dodges became known as “Plodges” due to their strong link with Plymouth models in Canada.

Melodie and Graham Smith are the proud owners of a well-restored 1954 Dodge Mayfair two-door hardtop with a long list of factory-correct options that have turned their car into a showpiece. Graham believes in authentic parts, so he assembled his vintage Chryco (Canadian version of US Mopar parts) components through a thorough internet search that included bids for the original equipment.

The car still has its original 228 cubic-inch flathead six and two-speed Powerflite automatic transmission, but now the Mayfair has an even longer list of luxury period options that were available from the factory or the Dodge dealers in 1954.

Graham told MyStarCollectorCar the Dodge was originally purchased on June 1st,1954 in Lethbridge, Alberta Canada by a woman who gave the car to her niece.  Graham became its owner in 1981 and, after a couple of years on the road, the car “sat for a good long time”, in his words.

Eventually Graham was able to devote his free time to the car project when he retired in 2003 and got serious about the restoration. It was a frame-off (car body removed from car frame) process because Graham wanted to do it right the first time.

Complex restoration projects like a frame-off process involve plenty of time and money, so Graham was directly involved in the restoration. In Graham’s words, “Whatever I could do, I did”. It should be noted that Graham is not an automotive tradesman, but he was willing to jump in the restoration game in a big way.

He found period-correct upholstery material for the car’s interior and even had a Chryco decal re-produced for the factory-correct engine details.

MyStarCollectorCar noticed the hitch on the back of the car, an item added to the Mayfair so it could tow a vintage tent/small boat combination trailer. Graham and Melodie have pulled the trailer on a few long trips, but admitted they prefer the creature comforts found in a typical hotel when they travel in the Dodge.

One of the car’s more unusual incidents occurred one mild winter day when Graham was able to drive the Dodge and trailer to the World of Wheels show in Calgary, Alberta Canada. Unfortunately, the weather turned nasty, so Graham was forced to drive the car and trailer home in a snowstorm. It was most certainly an odd sight for other motorists, given the time of year.

The other side of the coin was a hot summer trip through the Rocky Mountains when the Dodge began to over-heat in slow traffic up a mountain through a repaving construction zone and Graham was forced to turn on the heat flow to cool the car down a bit. The experience was a tough one, but Graham was not deterred and has logged about 10,000 miles on the car since it came back on the road.