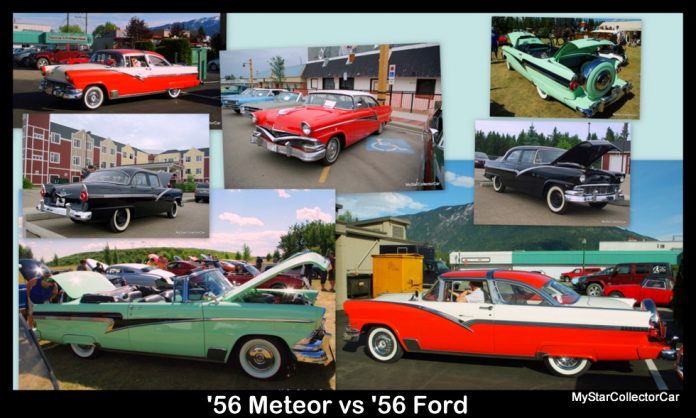 The lookalike angle was a highly intentional decision by Ford of Canada to blur the lines between a Ford and a Meteor during the Fabulous Fifties.

Ford resurrected the Meteor name when they introduced their 1949 models and took the then- new look “Shoebox Fords” into legendary status within the car hobby. Incidentally, MyStarCollectorCar was correct to use the resurrection angle because the Meteor Motor Car Company (no Ford affiliation) used the Meteor name for its cars during the early 20th century days of the automobile-until the Meteor company began to build hearses and ambulances instead of passenger cars.

The early automotive era was essentially a get-rich-quick world of dreamers and schemers; most of whom would fall well short of their goal to dominate the horseless carriage market. Eventually mergers, unholy manufacturer alliances and bankruptcies sorted out the crowded car market and the Meteor name hit the dustbins of automotive history until Ford of Canada decided to run with the handle for its Mercury dealerships.

The main reason behind Ford of Canada’s choice to use the Meteor name was based upon small towns. There were many small rural Canadian communities that could not support both a Ford and a Mercury dealership because there were simply not enough customers in their region.

Ford wanted to add a lower cost model to its Canadian car lineup for Mercury dealers who were already in small town Canada and had to contend with a frugal customer base that was highly unlikely to buy a more expensive Mercury model from them.

The answer was simple for Ford of Canada: Build a basic Ford with a new name that could be sold at Mercury dealers to penny-pinching Canucks in the Canadian car market. The name was Meteor and its legacy within car hobby circles is felt to this very day.

The early Meteor models have become a bone of contention for their owners because many people call them “Mercury Meteors” when they were simply Meteors when they debuted in the Great White North. The confusion may occurred when Ford of Canada revived the Meteor name in time for their 1962 model year-plus they added Mercury to the full name on their cars.

The 1961 timeout for the Meteor name allowed Ford of Canada to move forward with the 1962 Mercury Meteor name and may have created a point of serious irritation for current owners of the first generation of Canadian-built Fords.

The blurred lines between Meteor and Ford models has created a source of confusion typically encountered by identical twins who are forced to endure an endless array of tactless compare-and-contrast observations that are destined to insult one, the other, or both twins.

Meteor and Ford models do indeed look alike–but they do not have feathers that can be easily ruffled by comments designed to figure out one from the other.

MyStarCollectorCar decided to choose the 1956 Meteor and Ford because they have enough similarities and differences to make the comparison interesting for car guys.

Basically, the cars are interchangeable in most design, style and engineering areas. The biggest differences are cosmetic and involve bright work differences.

These two features represent the most obvious differences between the 1956 Meteor and Ford models. Most Meteor fans would likely also add these models had zero Mercury badges on their body panels-but they might be wrong if the cars still had their original Mercury dealership badges on them.

To be precise, the Mercury dealerships located in small town Canada in 1956.