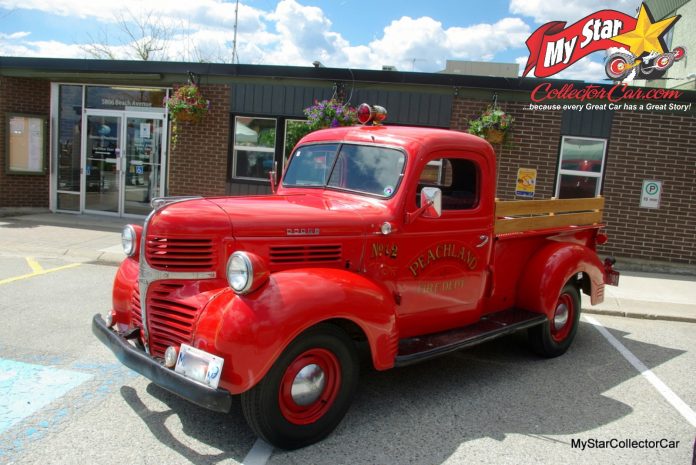 Fire department halls are the ultimate expression of function over form because they are designed for work–not play.

Don Wilson served with the Peachland Fire and Rescue Brigade for over 40 years, and he was Chief from 1980-2004. The truck was used for errands around town, but Don thought it would make a great public relations vehicle for parades and other community events. Don’s father bought the truck originally and it was used for years on the family orchard. Don’s truck was well-known in Peachland because he used it all the time, but he sold the truck to the department for a dollar in 1984.

He donated the truck in the 1980s and it used to have an old wooden tank in the back as part of the display. The truck also had a period-correct light and siren installed, plus the doors were lettered for the Peachland Fire and Rescue Brigade.

The Dodge did its job for a few years as a parade truck and community public relations vehicle, but then it became an issue. Unfortunately, the truck was parked outside for several years and suffered some damage. In fact, the Dodge really deteriorated over that time–so then it came down to a decision.

The Brigade was leaning heavily in favor of getting rid of the truck, but a local car club (the Wheel Nuts) threw a wing over the Dodge and essentially saved it from a bleak future. Grant Topham is also a retired Chief too, and he’s also a member of the Wheel Nuts, so he really pushed to save the truck.

The town of Peachland had set aside funds for the truck, but the real value came from the Wheel Nuts car club. They provided expertise and storage for the old Dodge and brought it back to life. Local businesses were also an asset because they helped provide parts for little or no cost.

The Wheel Nuts took the truck to a much higher level, so now it’s a very sound and reliable truck. There were some oversized wheels on the truck that put some serious strain on the steering box, so now the setup is much more stock.

They have the Dodge running like a champ now so now it’s a “dream to drive” and it can handle 50 miles per hour with ease. Everything works on the Dodge and its dramatic decline has been halted by the Wheel Nuts.

The Dodge has a great future ahead of it, but some of it depends on the Brigade. As mentioned, everything has to be practical at a fire hall, but this truck may be the exception because there are some car guys involved in the decision-making process.

The other issue is there will be a big vote on a new hall and part of the building would allow for a museum that would include space for the truck.

Call it a perfect happy ending.