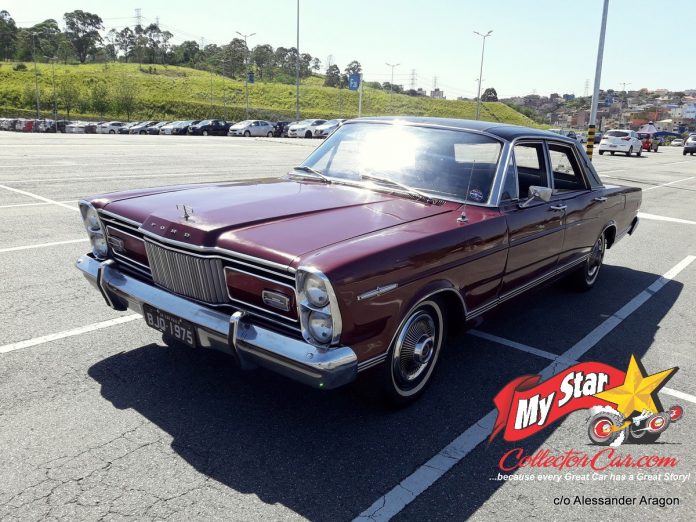 South America was the land that time forgot in the 1960s and 70s because cars from the mid-60s Detroit era were alive and well into the mid-70s.

Alessander Aragon is the proud owner of a ’75 LTD and he was happy to explain the story behind his Brazilian Ford. He’s owned the car for four years and he admitted it was difficult to find one in good condition at a fair price.

His patience paid off when he located a decent survivor: “Basically the paint and upholstery was 90% original, the former owner rebuilt the entire engine, but a lot still needed to be done such as: suspension, tires, electrical, air conditioning”.

Alessander is well aware of the value in originality: “I did a detailed polishing while preserving the original painting, I put new ‘white stripe’ tires, I built all the suspension, I installed the air conditioning system again and redid the electrical part! I put a new carburetor to give the car better breathing”.

The LTD option was high-end in Brazil, but North Americans would be surprised by what’s under the hood: “It has a 190hp V8 292, 3-speed manual gearbox on the steering column, air conditioning and a vinyl roof”.

Alessander is still amazed at the driving experience when he’s behind the wheel of this decades-old classic. He said it floats down the highway and: “The incomparable soft suspension is the main feature. On the road it is indescribable! Softness, silence, comfort! Consumption is around 5.5Km / L (13 MPG) of ordinary gasoline, up to 7km / L (16.5 MPG) on the road, due to the new 500cfm carburetor, it has better performance and arrives quickly at a good speed despite its size and weight–huge! At least once a month I run my Galaxie LTD! I like to hit the road with the family, and they love it too!”

There is always a list of things to do with an older car and Alessandro’s ’75 LTD is no exception: “Currently I had the bumpers chromed and some adornments to shine again but in the near future I want to change the vinyl roof and make some painting repairs, the upholstery is also on the list of improvements, always aiming to preserve originality”.

Alessander is unfazed by the extra attention he gets in the big Ford: “The car does not go unnoticed! the older ones recognize and even remember past stories and the younger ones ask about the car, model, etc.–it definitely draws attention!”