“So I Bought an Antique Car”

The Model T is so far back in automotive history that most people assume that it was Fred Flintstone’s second car. That’s a reasonable assessment given that the T is well past its 100th birthday in 2012.

That doesn’t deter a very motivated guy from driving one today but to understand the philosophy behind a “T” owner you have to hear a first person version of the story.

Bob Coiro submitted this article to explain his addiction to the Model T lifestyle.

“Back when I was a kid in 2nd grade, Dad began a tradition of commemorating the arrival of each spring season by taking our family out to the Long Island Automotive Museum. That’s where I got bit by the Antique Car bug. Brass-era automobiles, with their hand-cranked engines, diamond-tufted seats, gas headlamps and kerosene lanterns, wooden-spoke wheels and skinny tires, looked like nothing else I’d ever seen.

The Model T Ford was my favorite. I can’t quite put my finger on why I loved them so darn much — they certainly didn’t have the opulence of the Pierce-Arrows, Locomobiles and other brass-era cars, but the ol’ Tin Lizzie just seemed to have that magic certain something — and they were cuter than a kitten sleeping in a teacup.

While Mr. Ford had a reputation for being a devout penny-pincher, there is no denying he also had an eye for the aesthetic. Though he intended that his Model T be the most inexpensive car in the world, the design belied its own severe austerity with a pleasing combination of line and balance.

Well, having, in the fullness of time, graduated to old codgerdom, I came to the realization that if ever some of the wistful dreams of youth were to come true, the present would be the time to get about it. So I finally went ahead and bought a 1915 Ford Model T touring car.

Bob explained what it was like to drive a legend with 100-year-old technology. “ With only 20 horsepower on tap, acceleration is… well, let’s call it relaxed, and the Model T languidly drifts up to a comfortable cruising speed of about 35 mph. Top speed is a shade over 40, assuming a perfectly smooth, straight, level road and a brisk tailwind. That’s plenty fast when you’re riding on 100-year-old wooden spoke wheels. Gas mileage is a respectable 20 or so miles per gallon.

One of my favorite things is to crowd in a big load of boisterous friends and hit the road with that outrageous ahoogah horn attracting all kinds of attention on our way to Friendly’s ice cream parlor. Does good clean fun come in much bigger slices than that?

There are still a few areas with country roads so sparsely used, it’s safe to ride horses and in such places, you can also safely operate a brass-era antique car in stock condition—that is to say, without brake lights, turn signals, or any other kind of safety equipment.

Most of us, however, live in a world with traffic jams and impatient, hat-backwards drivers who change lanes like pinballs and express themselves in a digital manner having nothing to do with computers. Ninety percent of them wouldn’t recognize the hand-signal for a right turn. Some burgs are worse than others in this respect and I happen to live in a neck of the woods where the New York Minute was invented.

Now, as an idea, driving a century-old horseless carriage in modern traffic is right up there with Beta-Max video and 8-track tapes, but if you’re eccentric enough to buy a brass-era car, let’s face it, you’re also going to be of a mind to drive the thing. Under the right conditions, that can be done at a conscientious level of safety. Ideal conditions include daylight hours, good weather and—here come those two dirty words—safety equipment”.

Crank-starting the car can be memorable: If you brace yourself for the event by grabbing hold of the radiator, the hot brass will brand the name, “Ford,” into your palm (unless the engine is cold, in which case, you’ll end up exhausted rather than blistered).

If you forget to retard the spark timing,the crank will cheerfully dislocate your thumb as it jumps out of your hand, swings around backward and breaks your arm.

There is a safe way to do it — nobody has ever been injured while cranking left-handed — but I still regard that cast-iron serpent with a jaundiced eye and treat it like a loaded bazooka. It hides its treacherous head in the leather thong, yet I always hear its silent whisper: Did you forget to retard the ssssssssspark?”

“Model T brakes are feeble and their effectiveness on a downhill slope is enhanced by prayer through gritted teeth and opening one’s eyes as wide as possible (same braking technique as used on the Titanic). The way Henry designed the system, stepping on the brake pedal squeezed a fabric-lined band around a single rotating brake drum inside the transmission; the braking action was then transmitted through the drive shaft to the differential where it was sent to that rear wheel which had the least traction — and that tire had about the same size footprint as a shot-glass.

In 1917, the Rocky Mountain Brake Company began manufacturing an after-market set of brake drums for the rear wheels and with these installed, braking action improved dramatically, from abominable to bad. Driving a Model T (or any brass-era car) requires planning ahead. Nevertheless, it really is a heck of a lot of fun.

One hundred year old cars were an adventure when they were new but in 2012 the adventure can migrate past daredevil stunt and into life and death situation. Any advantage improves the odds as Bob explained,

“Safety glass in your windshield is an absolute must. Otherwise, you’re one short-stop away from sticking your head in a guillotine. The other absolute necessity is a working brake light, so you won’t get rear-ended by an impatient tailgater. I stuck an electric socket adapter in my rear kerosene lantern and then went one step further by adding a pair of lamps up higher where they can be more easily seen. The upper tail-lights also work as turn signals.

I also hid a bulb adapter in each of the cowl lanterns so there would be turn signals up front. Getting amber bulbs was difficult so I just colored clear bulbs with an orange magic marker.

I hid a simple on-off-on switch for the turn signals in the Klaxon horn’s mounting bracket. It works just fine and is practically invisible. Another hidden button operates the 4-way flashers.

The brain box for the turn signals and flashers was hidden under the rear seat, in the storage compartment. The wires to and from all the extra lights were run under the car and behind the upholstered side panels. Pulling the wires through was simple enough using a piece of wire clothes hanger.

Up through the 1914, Ford had equipped its cars with acetylene gas headlamps. Electric headlights were mounted for the first time the following model year. As the 1915 Model T didn’t have an electrical system, the headlamps were powered by the engine’s low-voltage magneto and the brightness of the bulbs varied with the car’s speed. That was fine back in the days of dirt roads, but in a modern context, bright, dependable headlights are needed after sundown—and that’s when a lot of autumn cruise-ins break up.

This is the “modern side” of the engine. It has a belt-driven, 12-volt alternator feeding a no-maintenance Optima battery hidden under the rear floorboards. With this system, there’s plenty of juice to feed all the lights and a cigarette lighter socket to power my GPS (which serves double-duty as a speedometer).

If you drive a brass car in traffic, you will stall the engine now and then—usually when trying to start uphill from a green light, with another car sitting ten inches from your rear end. At that point, it becomes downright dangerous to get out, chock the wheels and begin a wrestling match with the hand-crank, because angry drivers will be whizzing past at close quarters.

That’s when an electric self-starter becomes indispensable, and it made sense to install one as long as we were going to have a 12-volt power source aboard. Even the alternator and starter are easily hidden because only one side of the hood can be opened at a time. At car shows, we only display the “antique side” of the engine. 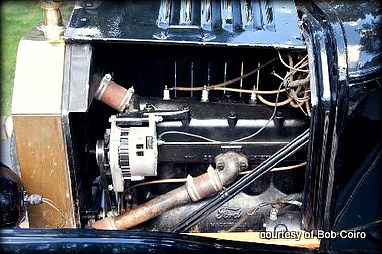 There are certain realities about 21st Century life-strict compliance with safety protocol is high on the list. Bob explained his “renovations” to the T.

“Antique cars have a very high incidence of fire. Most of the time, it’s an electrical fire. Preventing that is as easy as installing a battery cut-off switch. This switch is hidden under my front seat cushion, so it doubles as a theft-deterrent. Disconnecting the electrical system also enables me to invite car show spectators to put on the funny hats and false mustaches and climb aboard to be photographed, as nothing will happen if some kid accidentally steps on the floor-mounted starter button”.

This first person account is the next best thing to actually riding in a Model T but if you see Bob in your car show travels he might be persuaded to take you for a run.

Many thanks to Bob Coiro for this great insight into the Model T experience.