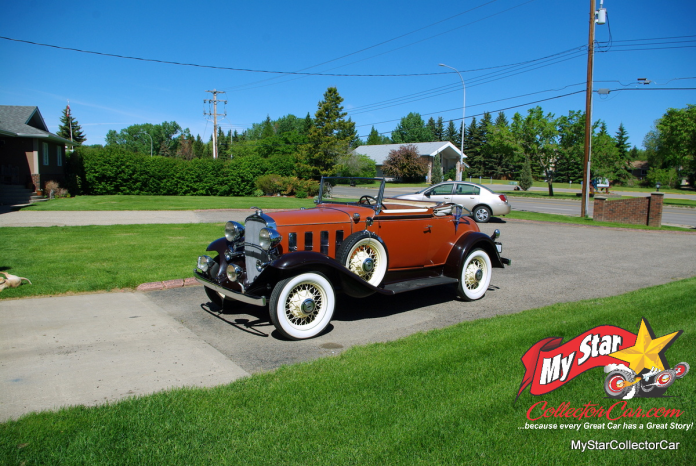 Dave Weidner is a devoted car guy who is also a devoted family man.

Lou was both a collector and a race car driver who competed on the Alberta sprint car circuit while running the family dealership before sons Dave and Robert entered the car business. For them, the move into the family automotive business was easy because Dave and Robert were already devoted car guys.

Dave was also already active in the car hobby and working for an Eatons department store in Edmonton when he became the proud owner of a 1932 Chevrolet Cabriolet convertible in 1967. He was approved for a bank loan and made an unsuccessful bid for a Kissel Gold Bug when he discovered the vintage Chevy drop top via his father Lou and decided to become its owner.

Dave used the car for family outings and recalled how the Chevy was the “first car we did as a family” in terms of a project. The Chevy was the centerpiece for family excursions as Dave became more confident in its ability to handle the road with his kids in the rumble seat.

Dave likes to drive his ’32 Chevy whenever possible and recalled many vintage car tours in it with his family in tow. Many years of careful use have been kind to the car because it still sports its original interior.

Dave also noted his classic Chevy also has its original Straight Six engine, complete with about 64 horsepower, according to Dave.  His driving experiences indicate the modest horsepower under the hood will propel the ’32 Chevy to about 45-50 MPH on the highway.

Dave respects the fact highways have become larger, faster, and busier over the past 88 years so he will take the 2-lane road less traveled whenever possible in his classic Chevy convertible. Nevertheless, he drove the car all the way from his Central Alberta home to Portland, Oregon about 30 years ago, according to Dave.

He has chosen to trailer the car to many events in recent years because of the logistics involved in the process-but is more than willing to join other like-minded vintage car owners in organized tours. Dave recalled one northern Alberta excursion that covered about 300 miles and was concerned because the car was not running very well during the first phase of the round trip.

The ’32 Chevy had not been on the road for a while and “the engine needed to blow out some carbon”, according to Dave. The sputtering ended on the return trip and the car ran smoothly on the way back to the starting point.

As mentioned, Dave used the Chevy as a family vehicle and recalled a visit to a track in Washington after he replaced a stolen radiator cap on the car. He forgot to remove the stylish replacement cap on the car to prevent another theft while it was in the track’s parking lot, so his son volunteered to take care of the situation.

The PA announcer at the track called Dave’s name so he could verify his son’s story after the kid was nabbed by a security guard while removing the cap.

It is very clear Dave has a huge attachment to the 1932 Chevy Cabriolet.