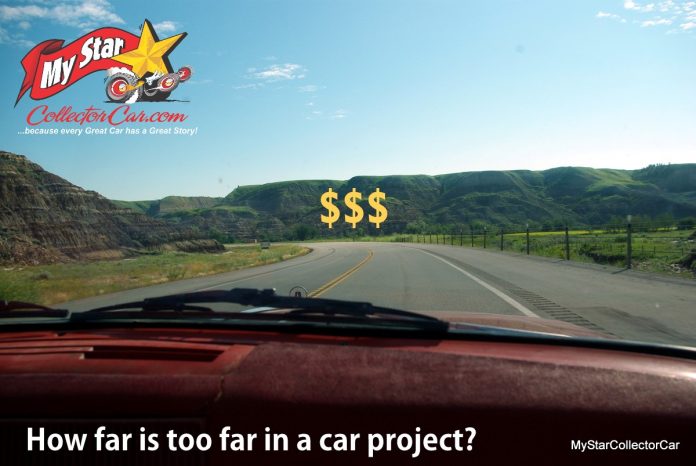 Remember when a five-figure restoration or custom project was like a Bigfoot sighting?

You heard about them—and some guys claimed to have seen a 10,000-dollar plus car project—or a Bigfoot–but they weren’t common.

15,000 dollars today will only get you a down payment on a top shelf paint job. There are many reasons why, but the biggest reason is inflation. In other words, try and get a guy to do a first-class restoration for 3.50 per hour like you could back in 1970. Trust me, you’re going to have to look in Cuba.

Despite the odds and the cost, there are guys who will hurdle the 100K mark by another two or three hundred thousand to build a car. Sometimes this level of spending is purely for financial gain because the car in question is simply worth the investment.

For example, a badly decomposed ’69 Dodge Daytona with a one-of-one option list (including a hemi) is worth the 3-500K to restore because your ROI (return on investment) is great when the car brings in 1.2 million at auction. Take those numbers to Wall Street and ask if they can do better.

The other “cost is no object” scenario is nostalgia. Nobody with a shred of inner logic would invest in Grandpa’s ’59 Olds four-door sedan because four-door sedans are on the low rung of the hobby. Nevertheless, if you thought your grandfather walked on water, you will take the legendary cost is no object approach to his humble sedan to preserve his memory.

Custom builds can take you down a financial black hole because a work of art costs mega money. Try buying the Mona Lisa for 50 bucks and a case of beer. Your ‘work of art’ custom is built to your personal taste–don’t expect Shelby Cobra money for your custom because the lineup of guys who want a Cobra is 10,000 times longer than the lineup for your custom.

This debate really comes down to one thing. Do you want to drive your project? There’s a point where the average guy—or the investor—has far too much in the car to even risk a drive around the block. The risk-reward chart has effectively tipped heavily in favor of risk, so the question is simple.

Is that where you want to be?

Most car guys can’t live with those kinds of restrictions, even if they have every blood, sweat and tear—and dollar in their project. That’s because they’re not sweating the cost of NOS, factory-correct, date coded parts, or a one-off, 10,000-hour, custom body. Instead, they hit the road knowing their car may not be a show winning points car, but it is a people-winning street machine that actually hits the street.

There’s a simple moral to this story. Do you want to build a car that’s so costly it never sees daylight, or do you want to showcase what the hobby is really all about?

How far is too far?