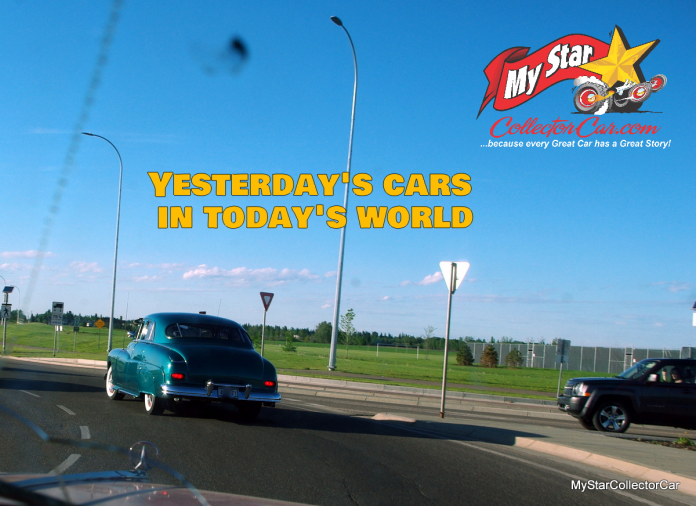 There are numerous challenges when car guys face the 21st century in a 20th century vehicle.

Most car guys have found a way to adapt to the new world with an old car, but we at MyStarCollectorCar would like to add our two cents worth to this topic and provide five of our more notable observations about vintage cars in the 21st century.

The first notable observation is the turn signal indicator and its uncanny ability to keep signaling a turn after the indicator cam wears out in an old car. This cheap little component will inevitably wear out and fail to return the signal light indicator to its neutral position.

Brakes bring us to our second point: factory drum brakes with no power boost on a retro ride will require greater driving skills when the faulty blinker cam gets the driver into a jackpot with another driver who erroneously assumed the old car was turning at their street.

The old school drum brakes on a vintage ride will not stop the old war pony on a dime like a new car’s brake system, a fact that will be completely lost on the new vehicle’s driver, a self-absorbed nitwit who has never even driven an old car.

The third addition to our list is the vintage ride’s original horn because the vintage car driver will need it on several occasions during the road adventure portion of the car guy program. An old car horn is loud enough to wake up the dead and send a noisy message to the brain-dead on the road who choose to ignore traffic etiquette as it applies to old cars on new roads.

A vintage car’s factory horn produces enough racket to grab attention in today’s world where modern car horns sound more like a neurotic Chihuahua than a crazed Rottweiler to listeners. A loud horn blast from the past is an attention-grabber that makes a strong editorial statement in today’s world. Personal experience proved this point for us here at MyStarCollectorCar, although the most recent incident included a one-finger salute from the young female driver in a sport ute who cut us off and reacted somewhat badly to the loud retro horn of admonition.

The fourth addition to our list is the steering and suspension system on an old car. A vintage car was designed, engineered, and built during a bygone era when people recognized their vehicle’s limitations from practical experience and drove them accordingly as a daily driver.

Overdriving a vintage ride will have predictable results that range from simply hitting the ditch and laughing about it-to being fitted for a toe tag before a future autopsy following a crash. The trick is not to confuse the handling characteristics of a 50, 60 or 70-year-old car with a new car when one is behind the wheel of a vintage car.

Last, but most certainly not least on our list, is an odd reality when one drives an old car in modern traffic: other drivers will conclude old cars are too old to keep up with their modern vehicles on the road. Everything over 25 years is a Model T to them and has a similar top speed in their minds, so they will pass a vintage car-even if the old car is easily able to keep pace with new iron on the road. Their massively erroneous assumption will compel the new car drivers to hit speeds well beyond their normally cautious approach to road velocity.

It is an odd but true reality for old car drivers who choose to keep pace on modern roads.