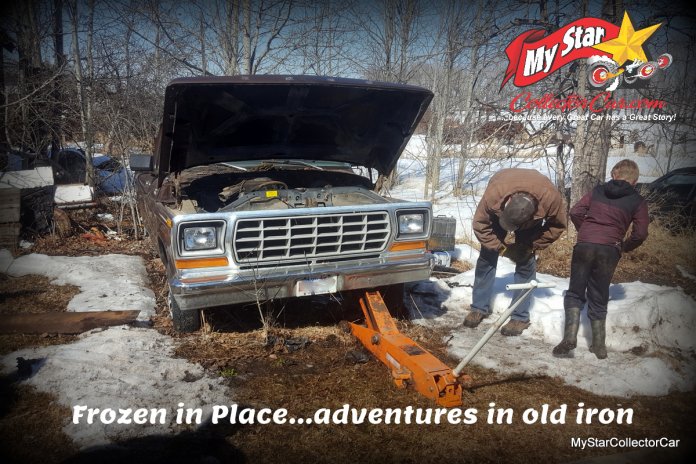 There are two ways to become the proud owner of a vintage ride: get drunk at an auction and write a big check for your impulsive purchase — or fight against the ravages of time and work on a vehicle that has been battered by use, misuse or severe neglect over the years.

Therefore, our most likely game plan was the purchase of four-wheeled relics that were long past their best-before date and highly unlikely to run under their own steam.

Most car guys have chosen the same perilous path to vintage vehicle ownership and can relate to the misadventures associated with the initial phase of the acquisition process.

A recent adventure with a 1978 Ford ½ ton offered many of the standard obstacles found in most situations because the truck had not run in years and its wheels were sunk into the frozen ground. There was no sane reason to attempt to revive the truck because it was not “running when parked” and the old Ford was now a parts truck.

Its owner (Brian Saby) is a retired dentist who was not looking to resurrect the ’78 Ford in his spare time. Instead he now uses his sizable manual dexterity skills to carve pumpkins and various other vegetables into works of creative art. Brian even created a business website to showcase his new post dentistry world.

The underlying message is Brian does not consider himself to be a car guy in any true sense of the term, however he was more than willing to help devise a plan to pull the old Ford out of the frozen ground.

The ’78 Ford was destined to become a parts truck for an ambitious plan to restore another 1978 Ford truck back to its former glory. The other truck was purchased brand new by its late owner and had been parked for many years on his family farm until two of the man’s grandsons decided to tackle the restoration.

Brian Saby’s Ford truck would be a big asset for their Ford truck project because it was intact and had several useful body parts, including a mint front bumper.

As mentioned, the truck has sunk into the ground and would be difficult to extract because the main goal was to avoid any damage to the front end of the Ford. Brian’s brother in law Dave Surkan used a massive floor jack to lift the front end of the truck so a chain could be looped around the crossmember and pulled by a Bobcat loader via a sturdy chain.

There is always a Murphy’s Law (Whatever can go wrong-will go wrong) that applies to this procedure, but nothing from that grim reality applied to this ’78 Ford truck. The tires took air and none of its brakes were locked up when Dave tugged the old pickup out of its shallow grave.

True story: the entire process went smoothly and MyStarCollectorCar was there to witness an event as rare as a Bigfoot sighting.

Just for the record, none of these pictures were photo-shopped and Brian Saby is still not a car guy, but he can carve pumpkins with the best of them.