We attend a fair number of shows that feature one manufacturer in a family reunion kind of way.

A Hatfield reunion usually includes very few McCoys and the same principle applies to some car shows where the invited guests share a family brand name. 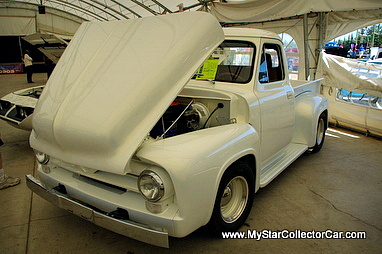 We attended a major Mopar meet that held true to this rule until we entered the VIP tent where the best of the show were protected from the sun and heat in a comfortable tent. The high end guests of honor were in the tent and the invitees included Super Birds, Chrysler 300 letter cars from the 50s- plus a 1955 Ford F-100 pickup truck.

Needless to say, we were pretty surprised to see the Ford truck hanging out with the best of the best at a Mopar show. The truck was a show-stopper in every sense of the word because it was done to a level of quality that could only be described as Best of Show-in any show where all of the other competitors did not come from the same manufacturer.

We were curious in the killed-the-cat sense and so we took a closer look at the unlikely guest. The first thing we noticed was the massive 528 Ray Barton Hemi under the hood of the Ford truck. A look inside the cab added another answer to our question about a Ford at a Chrysler show because the truck had a 1964 Chrysler Torqueflite push-button transmission in it.

It turned out that even the front end was pure Mopar because it came from a Chrysler Cordoba. It became more obvious that the Ford was almost 100% Chrysler if you looked beyond the sheet metal.

The owner was a dyed-in-the-wool Mopar guy named John Romney and it turned out that his Chrysler roots ran very deep. The Ford truck was a rescue project that he found back in the 70s sitting in a field with no glass and many bullet holes in it. 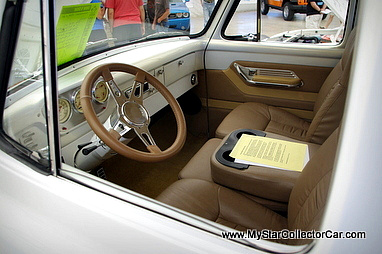 Back then the F-100 began its new life with John as a track truck with a muscled-up 440 Six Pack wedged into the Ford’s engine compartment. The biggest issue for John was traction because the truck was one long smoke show on the track that was difficult to control or stop at the end of the quarter mile.

The transformation to its current configuration as both a show and go truck has meant that the F-100 has won Best of Paint competitions at shows, but it has been retired from active race duty. However, the giant Elephant under the hood would give John and his Ford some very serious power if he ever decided to un-retire the F-100 and hit the quarter mile circuit.

We doubt that would happen because this truck is now a stunning example of a resto-mod done to the highest possible level. Few people would want to rough up this truck on a quarter mile track.

We like what John has done to his F-100, including the very stylish push button transmission. It turns out that John wanted something different for his truck and decided against a column or floor-mounted tranny.

John achieved something different in a big way because his Ford was an honored guest at a Mopar show and now we understand why it belonged in the VIP tent.