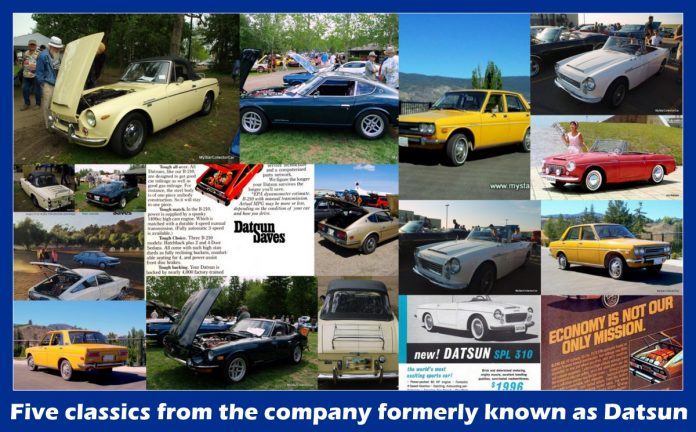 Datsun was a famous brand name in North America when the Japanese automotive company crossed the Pacific Ocean and delivered an import alternative to potential buyers on this side of the pond.

Our savvy MyStarCollectorCar readers will already be aware the Datsun name was resurrected in the 21st century for new markets in large developing countries such as India.

Datsun’s handle traces back to its original trio of Japanese investors who created the DAT name in 1914 based upon the three money guys’ first names. A series of mergers culminated in a name change to Nissan Motor Company in 1933.

Japan’s ill-advised war effort made Nissan a major military manufacturer for the country, therefore the outcome of World War Two did not work in the car company’s favor in post-war North America. The return of the Datsun brand name was part of Nissan’s strategy to win over North American car buyers who were not likely to buy a car with a Nissan name just a few years after the war.

Datsun produced some interesting models for the North American market. One of its most intriguing cars was the Datsun 1500 model introduced in 1963. The little imported convertible offered cool styling in a nimble package and was a complete opposite of big Detroit iron from that era.

The Datsun 1500 only sported about 85 horsepower — but it was small enough to boast a solid power-to- weight ratio and would eventually hit over 90 mph top speed. The Datsun 1600 model offered more power and pushed the little Japanese sports car to even higher speeds.

However, our second addition to the Datsun legacy in North America was a muscled-out version of the Datsun 1500 (and subsequent 1600 models): the Datsun 2000 sports car built from 1967 to 1970. This wild thing boasted well over 100 horsepower and a five-speed manual transmission that trumped the 1500 and 1600 models by one extra gear.

The 0-60 times (a little over 8 seconds) buried the Datsun sport car’s 1500/1600 predecessors by at least 7 seconds, while its top speed was reputed to be anywhere from 105 to 140 mph. In short, the Japanese-built Datsun 2000 took the performance game to a high level during the heyday of Detroit’s muscle cars.

The impact of the Datsun 1500/1600/2000 sports cars was significant, but it paled by comparison to our third addition to the list: the legendary but non-descript Datsun 510. The Datsun 510 was a squarish sedan with none of the sexy sportiness found in its small stable mates (the Datsun 1600/2000 convertibles) and offered a basic choice between the 510’s two and four door models.

The 510 oozed practicality, reliability and sensibility during its five-year model run from 1968 to 1973. It was built as a people hauler with enough passenger space to haul big people in the back seat. Nevertheless, the Datsun 510 was a solid performer because it used European-inspired engineering features like four-wheel independent suspension and front disc brakes.

The engineering behind the Datsun 510 made the car an unlikely road race favorite because this sedan combined performance with affordability during its legendary production run.

MyStarCollectorCar’s fourth addition to the Datsun legacy was the B-210 model built from 1973-1977. The B-210 was the heir apparent for the Datsun 510 and offered numerous model choices that ranged from station wagons to fastbacks. The timing was great for the B-210’s debut in North America because the Arab oil embargo produced major fuel shortages and jacked up the pump price of gas by a large margin.

The Datsun B-210 offered style, snappy performance, and fuel efficiency in a small package at exactly the right time for its debut in North America. Timing was everything for the B-210-plus it was able to feed off the solid reputation of its predecessor, the Datsun 510.

The fifth and final member in good standing for MyStarCollectorCar’s Datsun list was the Datsun 240Z. This sleek beauty had a timeless style that was years ahead of its time when it debuted in North America as a 1970 model in late 1969.

The 1970 240Z Series 1 took North American car guys by storm because it was a two-door fastback that ran with the big dogs from Detroit in terms of that look. The first 240 Z models also had a lively six-cylinder overhead cam engine that produced 151 horsepower for its drivers’ high velocity goals.

The 240Z shared a great deal of its engineering with the 510 models because the handling features found on the famous Japanese sedan were good enough for the Z models.

The other component of the 240Z was its cabin size since its Japanese designer wanted the car to handle a 6-foot North American driver who wanted a sporty import.

The legacy of the original 240z models has grown substantially since their debut in North America. They were an affordable choice for buyers who wanted a car that looked good-and got from Point A to Point B in a hurry-even through a curvy route.

Datsun was a big player in the North American import car market during its early days and it was an automobile name that made car guys think coolness sometimes came in smaller packages.

MYSTARCOLLECTORCAR MAY 2023 CAR SHOWS AND EVENTS