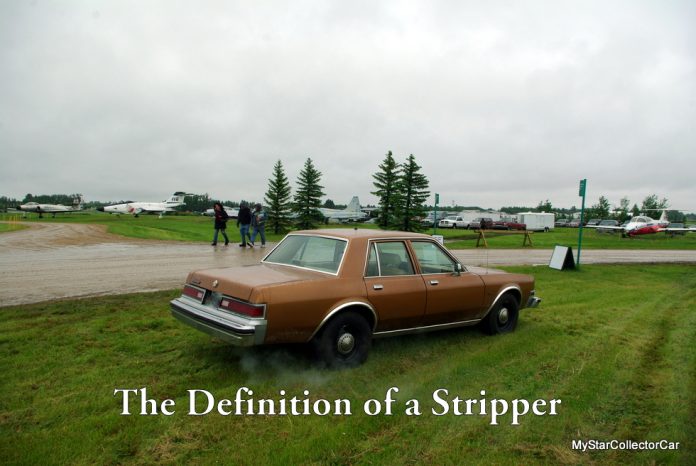 The stripper term is typically applied to any entertainer who begins a performance fully clothed and ends up with a pile of discarded clothing on the stage floor.

The stripper’s show is usually accompanied by music that reveals whether the performer knows how to gyrate (if not dance) while shedding clothes.

There is another meaning in car guy world for stripper: Any old car that left the dealership with a cheapskate owner who wanted to avoid spending cash on automotive luxuries.

There are many ways to define a car as a stripper and MyStarCollectorCar would like to list the five best reasons to put this label on an old car.

The first reason is the lack of chrome on the old car. The basic rule of thumb was domestic cars from the past was the bigger the numbers on the dealership invoice- the more bling on the car.

Cars were assigned different levels of trim that directly reflected the level of investment in the car. Minimal or no trim and dog dish hubcaps meant the car was less expensive than a flashier stable mate from the same car company that particular year. The basic message was; “Splurge a little, you tightwad, because we are selling you one of our 4-wheeled chrome-challenged bottom feeders”.

The second reason to identify your car as a stripper is to check under the hood. A stripper car will have a very basic engine, likely a six-banger, to power it down the road.

The basic nature of a barebones car is based upon minimal investment and nothing says low end purchase better than an engine choice that is on the bottom rung cost-wise, and simply came with the car.

The third way to identify a stripper car is a quick check of the transmission.

Most stripper cars from the past also had three-on-the-tree manual transmissions that were standard equipment back in the day- and didn’t cause the searing pain of price creep for the thrifty owners.

The fourth way to identify your car as a stripper is count the number of doors on the car. Most people would lean toward a four-door sedan as a stripper vehicle and they would be partially right. However, a two-door sedan was the ultimate stripper during a bygone automotive era.

A two-door sedan cost less than a four-door sedan and that basic factoid made these cars even more a stripper than a more-door at the time. However, the two door posts took a major fork in the road over the years and are now a very desirable platform for performance resto mod or pro-touring upgrades.

The fifth way to throw your vehicle under the stripper bus is a quick check to see if it has a radio. It is known as a “radio delete” model if there is a plate over the spot where the radio is typically located in the car and it means the first owner cheaped out in the tune department when he bought the car. Hopefully he could whistle plenty of happy tunes about the bargain basement vehicle’s purchase price while driving his stripper car.

These days, the distinction between a stripper car and a higher end model of the same vehicle are less obvious because most new cars are equipped with plenty of creature comforts right from the factory.

MyStarCollectorCar has little knowledge about the current status of human strippers.