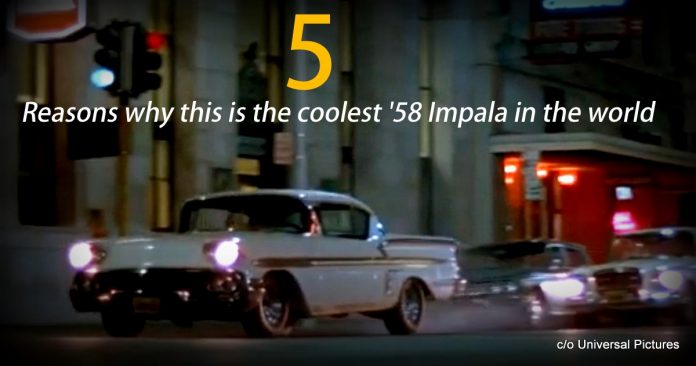 Few if any car guys from older generations have not seen ‘American Graffiti’ at some point in their lives, presumably while they were in lengthy lineups outside the theaters because this legendary flick was a huge blockbuster movie when it hit the big screens in 1973.

The movie has instant stars out of its largely unknown cast that included Opie from the ‘Andy Griffiths’ show, along with former carpenter Harrison Ford and bit actor Richard Dreyfuss who had a thin acting resume in 1973.

Lucas was able to survive his movie debut fiasco, mostly because he was friends with Francis Ford Coppola, another young movie director and producer who was also a great salesman, according to Lucas. Coppola was nearly dragged down by his involvement with the ‘THX 1138’ project.

However, Coppola was able to do his Hollywood penance with a little movie by the name of “The Godfather’, a huge box office hit that gave him instant credibility in show business. Coppola’s new superstar status allowed his friend George Lucas to move forward with ‘American Graffiti’ after Coppola became the movie’s producer. In essence, Coppola brought star power to the movie project and moved its investors in the right direction.

Most of the cars’ fame extended from their ability to blow away the competition in street racing, so John Milner’s ’32 Ford deuce coupe and Bob Falfa’s ’55 Chevy in ‘American Graffiti’ have garnered an enormous amount of attention over the years in car guy circles.

But there is another star attraction in the movie, the 1958 Impala two-door hardtop owned by Steve Bolander, a car that also deserved plenty of accolades, but generally falls in the shadow of the other star vehicles in ‘American Graffiti’. However, we at MyStarCollectorCar do not believe the ‘58 Impala should be left out of the spotlight.

Consequently, MyStarCollectorCar will put forth 5 good reasons why the ‘American Graffiti’ Impala deserves to be included in the debate about star cars in the famous movie.

The first reason is simple: the car was cool–way too cool for the hapless Toad character after he was given temporary custody of the Impala by its owner Steve Bolander.

The third reason is the ’58 Chevy had undergone a mild custom that enhanced its overall appearance. The list included Caddy taillights, period-correct tuck and roll interior, and red trim paint highlights that set off the white paint in a big way.

The fourth reason is the Impala had a beast mode powertrain–not as beastly as Milner’s deuce or the ’55 Chevy-but clearly the car was a force on the street.

The fifth and final reason to love the Impala? It was well worth stealing and then stealing back when Toad encountered the thieves. Also, it was well worth a fight when the thieves eventually confronted Milner and lost a war with him over the Impala’s rightful ownership and pounding on Toad.