One of my earliest recollections as a pre-schooler was my dad’s prized Model A sedan.

He loved that old car, probably because it reminded him of his own wild and crazy days as a kid.

We used to take turns behind the wheel of the parked A… and pretend that we were actually driving the old classic.

To this day, that childhood experience is as close as I have ever come to actually driving a pre-World War Two car, and that is one sorry situation.

Promises have been made over the years, but I have not yet turned a wheel behind the wheel of a car from this era.

Model As or  other pre-war brands would likely be very different in engineering and technology than most post war vehicles from the late 40s, but the pre-war rides would be my kind of driving adventure (and incredibly cool) in their stock form.

Drift back even further and you find yourself in the land of the Model T and other more complicated rides. Most of us have never had a chance to manipulate what appears to be three brake pedals on the floor of a T. 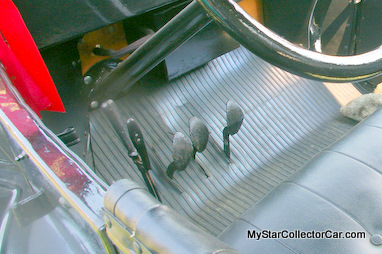 Most T owners will explain that rookie drivers can typically get the cars moving forward, but the stopping part is a whole ‘nother concept for new drivers. Throw in a gas pedal on the steering wheel, a clutch on the e-brake, and a spark advance that may or may not make sense to modern drivers and the possibilities for disaster are limitless for the incompetent new T driver. 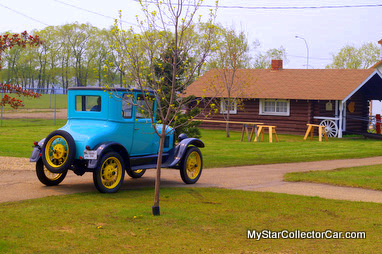 So I need a spin behind the wheel of a senior citizen aged car to make my life complete. The $64,000 question is very obvious.

Who would be crazy enough to give me a chance to say “you complete me” to their old classic?

DENNIS:“The Model A is fairly straight forward. The clutch, brake and gas pedals and the shift lever are where they are in modern floor stick shift cars and even where they were with most of the other cars, even in the 20’s. Compared to the modern car, the first thing you’ll notice about 30’s, 40’s, and even 50’s cars, is that they don’t turn and they don’t stop like a modern car. Especially the Fords from the 4 wheel, mechanical brake era (28-39). It was virtually impossible to adjust the 4 brake rods to apply equal pressure to the brake linings. On a wet or sandy road, the linings that grabbed first, were the direction you were going. As for turning, old cars, lean until they tip over and often, the difference between leaning and tipping over was purely speculative.

The Model T was obsolete 10 years before the last year of production in 1927. It’s truly the last “Horseless Carriage”. More than once I’ve left the key in the ignition when I go (briefly) into the local C-Store, and had people comment, “Aren’t you afraid somebody will steal it?” I invite them to get in and try to drive it? As soon as they realize that the only thing familiar in there is the steering wheel, they give up. Of course, I don’t tell them that I shut the fuel off every time I park it and even if they did get it moving, they are only going about 20 feet. I shut the fuel off because Model T’s have this nasty habit of dumping the entire contents of the gas tank on the street if the float sticks in the carb. When I explain to them that the pedal they think is the gas is actually the brakes, the pedal they think is the brakes, is reverse, the pedal they think is the clutch is low and high gear. The ‘clutch’ (or more accurately ‘neutral’, since a Model T is always ‘in gear’, so to speak), is part of the emergency brake lever. The “gas” is the lever on the right just below the steering wheel, what they might think are the turn signals is the spark advance and retard and that funny looking little knob sticking out of the dash in front of the passenger, controls the air/fuel mixture and the choke and often, you are operating all of them, at the same time, they usually scratch their heads and walk away.

In reality, a Model T is quite easy to drive and a novice can usually figure it out in a matter of blocks. Now, stopping it? That’s a different story. The brake pedal operates a 2 inch wide band in the transmission. The emergency brake lever operates the brake linings on the rear wheels and puts the car in ‘neutral’ in the process. Model T’s don’t have front brakes, so if you find yourself in an emergency and you yank the emergency? brake for all it’s worth, the only thing that’s going to happen is that you are going to leave 2 skinny little skid marks right up to what ever you smash into.

MARCH 2020: A VERY CREATIVE STAN-MOBILE AND TRAILER BUILT BY A...