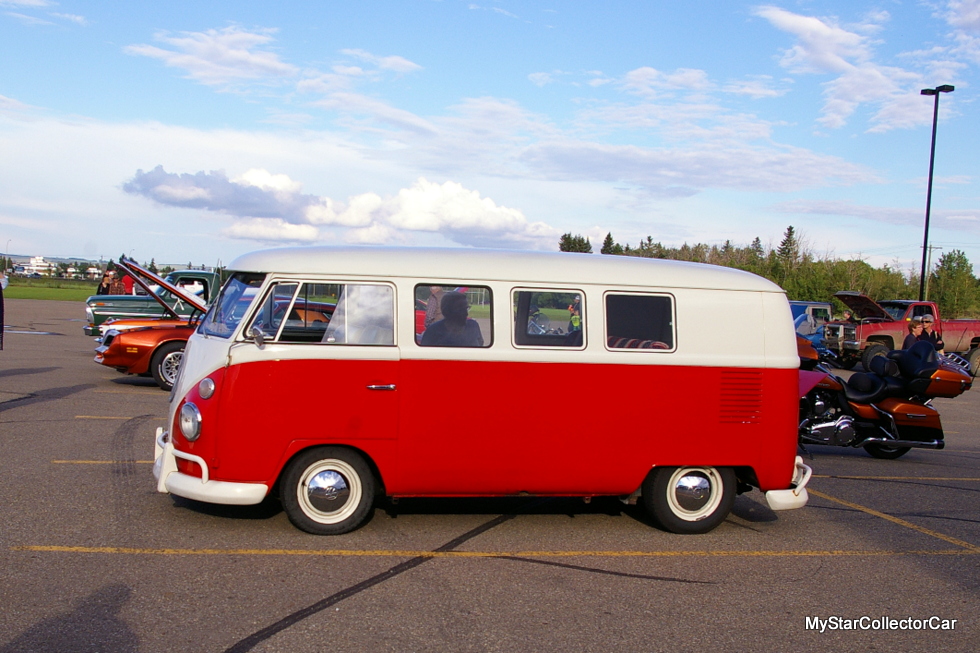 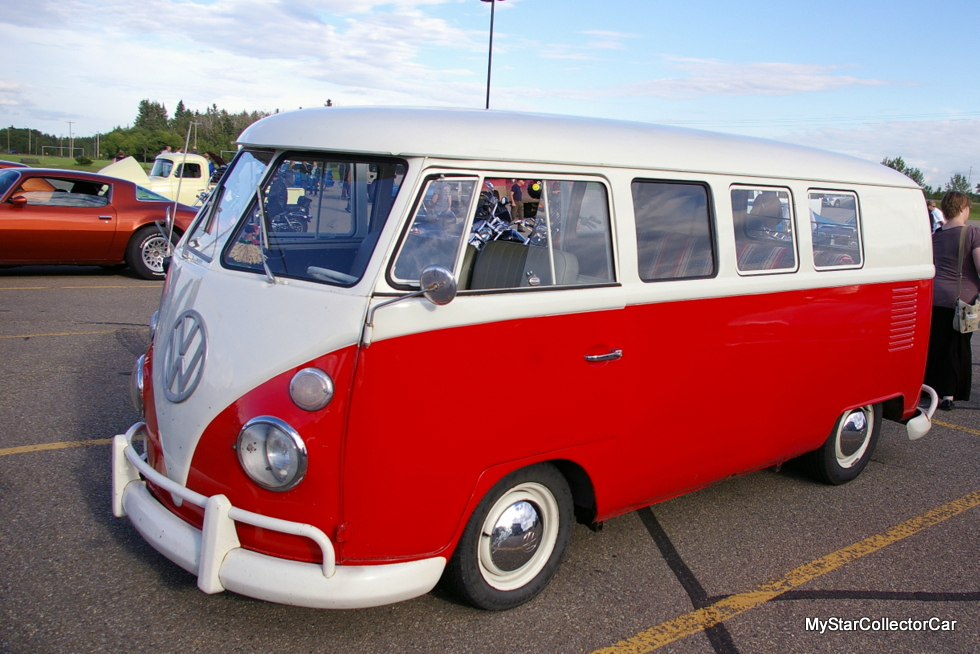 Bonnie Slager is a newcomer to the car hobby.

‘Her husband Adrian has always been a car guy and wanted to get his bride into the hobby so she could share his enthusiasm for vintage rides.’

It started when Bonnie and Adrian purchased a 1968 Volkswagen Beetle that fired up Bonnie’s inner car girl.

She began to understand the appeal of the vintage rides in a 21st century world where the old rides are rock stars on the road.

Later, Adrian found the perfect birthday gift for Bonnie when he purchased a 1966 Volkswagen micro bus from a reluctant seller. The previous owner had a stable of VWs in various states of repair and decided to sell the ’66 VW van.

He had seller’s remorse and canceled his ad–but not before Adrian made an offer on the van. The former owner decided to sell the VW to Adrian because he felt ethically bound to honor the sales agreement. 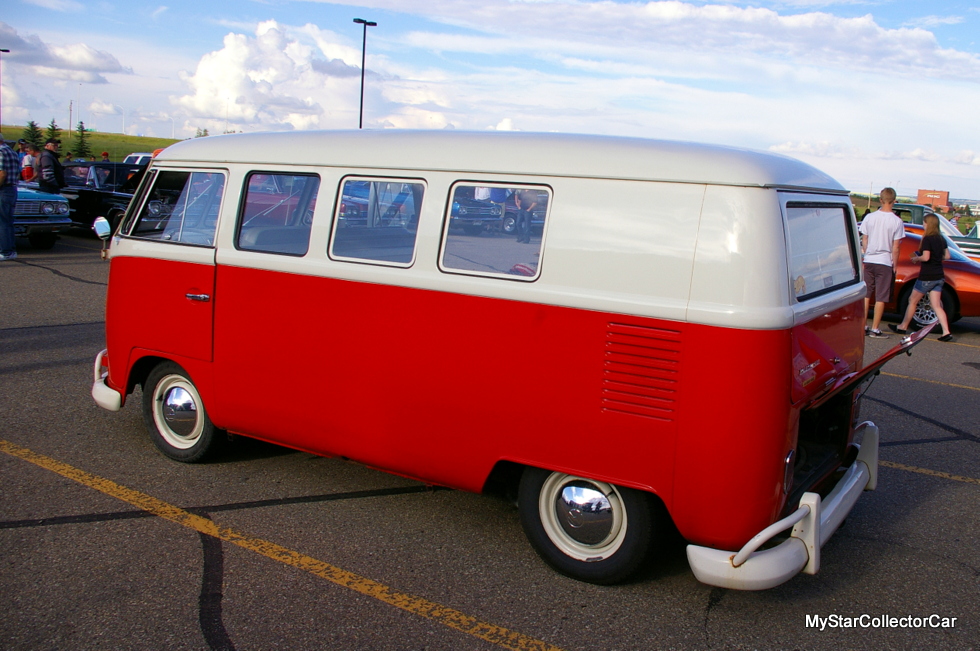 We caught up to Adrian and Bonnie at a show less than a week after Adrian bought the VW van and gave it to his wife as a birthday gift the next day. He had driven the van back to their home and the VW had performed admirably on the highway. 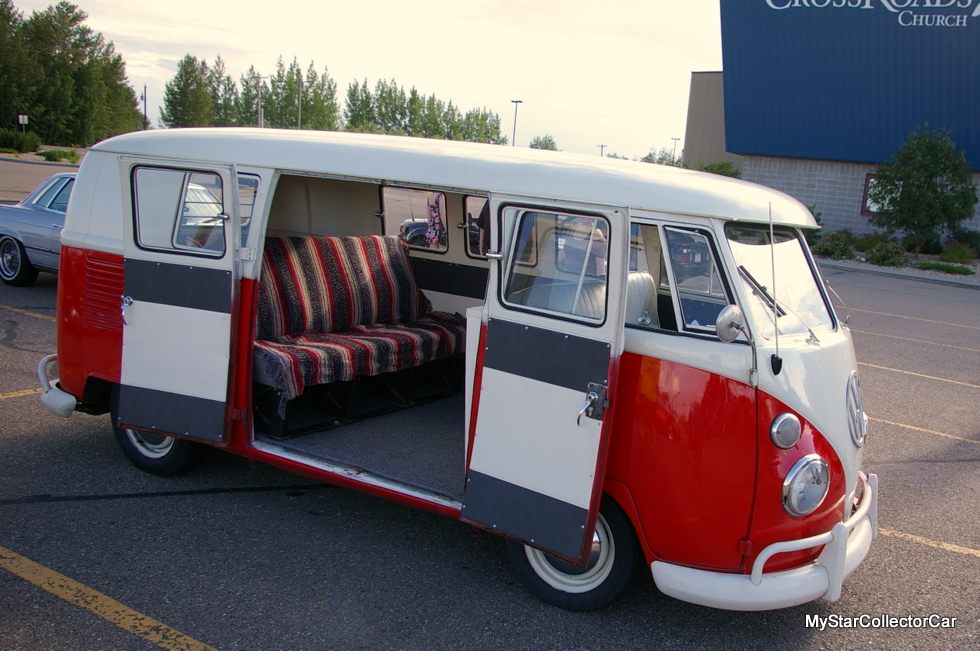 Adrian was able to keep a steady 60-65 mph (100-105 km/h) pace on the highway because the van’s power-train has been upgraded and the beefed-up 1800 cc engine delivers more punch with the improvements. 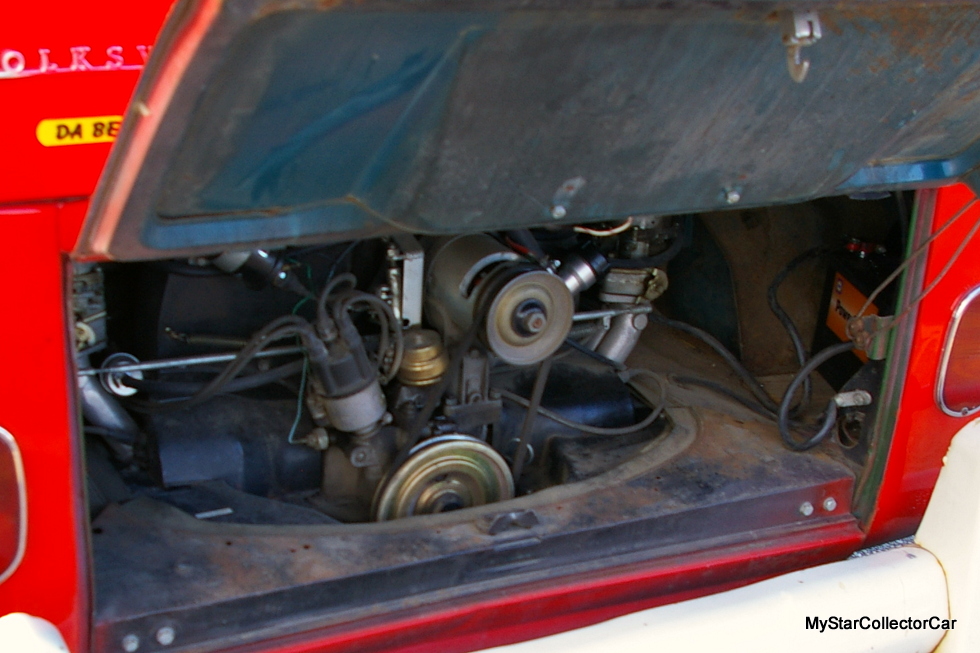 Adrian and Bonnie want to restore the VW back to its original glory in the future but plan to enjoy it as a driver for the foreseeable future. 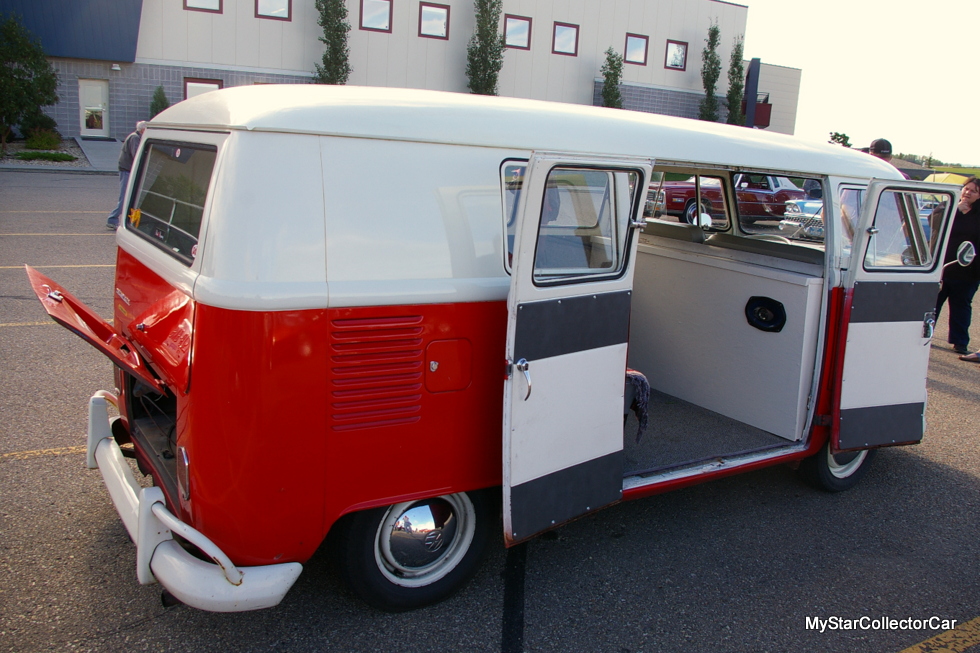 One of the improvements will be an accurate gas gauge because the Slagers already experienced their first road adventure on the initial trip in the van. They ran out of gas and Adrian forgot the van was in gear when he re-started it.

Older vehicles with manual transmissions did not require drivers to push down the clutch to start them, so the van lurched forward in gear and killed the aging starter in the van. 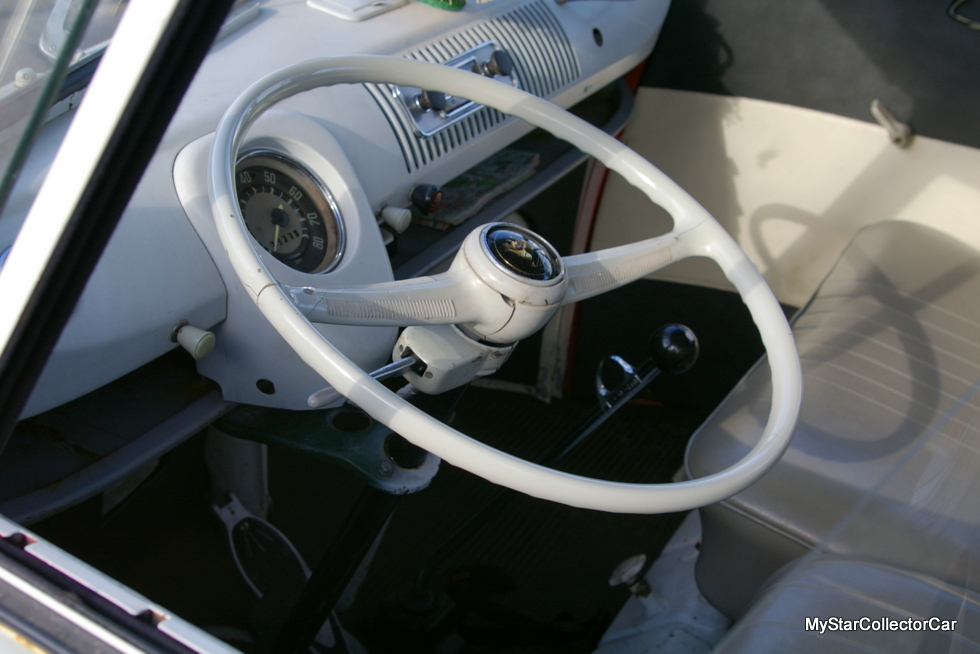 Bonnie had never been involved in a push-start and got her first lesson in this lost art when she let out the clutch while Adrian pushed the van. It fired up and Adrian was able to drive it home.

The van’s rebuild process got an early start because Adrian replaced the starter and battery to ensure Bonnie would not have to go through the push-start protocol every time they drove the VW. 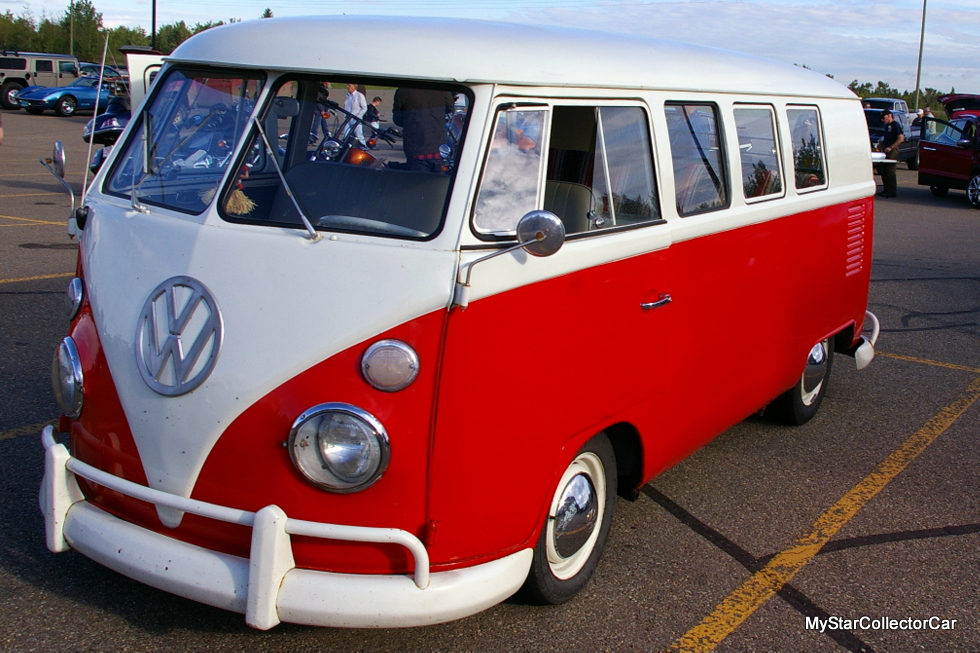 Adrian told us he was a “muscle car guy” but “was flexible” when it comes to the old rides. VW vans attract plenty of attention at shows and their ’66 was no exception because there were plenty of curious spectators around the van.

The Slagers have picked a solid investment vehicle with their 1966 VW van. These vintage German rides are a hot commodity in the vintage vehicle market and highly restored versions command serious money. 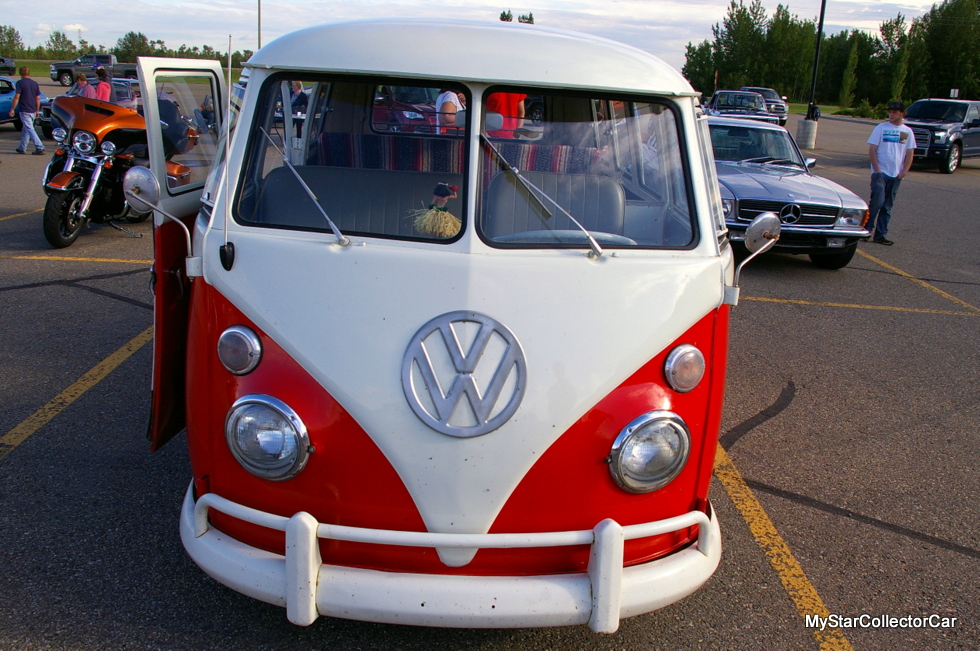 The Slagers intend to restore their VW van back to its original glory in the future but they have no plans to sell it.

‘After all, it was Bonnie’s birthday gift.’