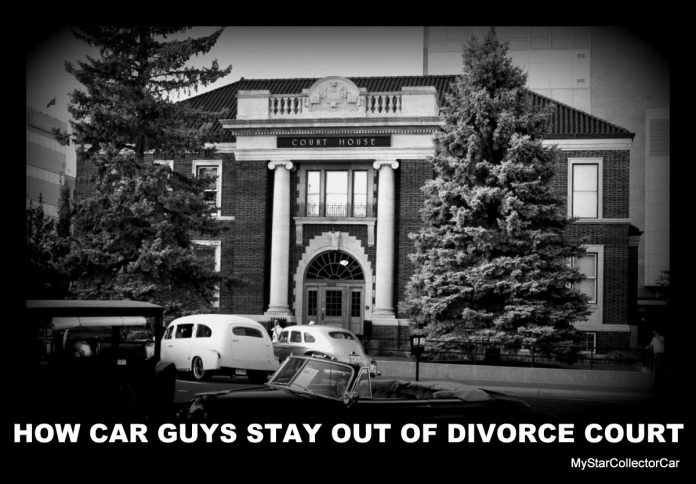 MyStarCollectorCar has never made a secret of our belief there may be an ample array of reasons why a marriage can get run over and killed by an old car.

The first reason is the practical side of an old car. They may have been transportation stars during a bygone era-but now old iron may have outlived its usefulness-outside of the cult known as the car hobby.

Many car guy spouses are reluctant to look beyond the practical side of transportation and simply use transportation as a daily but necessary part of family life. The current popularity of sport utility vehicles is largely based upon an old school station wagon philosophy because both have a grocery hauler/kid hauler function.

However, if a car guy shows up with a first-gen Ford Bronco sport utility from the 1960s instead of a 2020 version, then he runs the risk of serious marital problems because the earliest Broncos have become very expensive. Some of the old Broncos may even cost more than a 2020 model and are no longer equipped with the practical use feature.

The second reason for marital stress in car guy world is the rock star parking given to old vehicles. Most car guys will park their beloved vintage vehicles inside for the winter months where these internal combustion blasts from the past will take up plenty of space, including a no-wife’s land perimeter around the treasured ride to avoid door dents.

The issue is not dramatic if the garage is big enough to park three Kenworths inside, but it will become a huge problem if the modern family chariot is banished to a place outside of the garage. A rough equivalent to outside parking for brides’ rides would be to make the kids live in a backyard tent in January.

The third reason for happy divorce lawyers is the hidden cost in a car restoration project. Every car guy who has faced the reality of a build has crashed head-first into this grim reality. The term “hidden” is very accurate because few people outside of Superman and his famous X-ray vision can truly anticipate what evil lurks under the surface of a vintage ride until they uncover the horror.

The result can be a frightening dose of reality for the car guy and a long discussion with a hostile bride who never saw the magic of an old car in the first place.

The fourth reason for car guy versions of marital disaster is the discovery of hidden costs attached to the project. Most smart car guys are upfront with their wives when it comes to the car project’s bills and subscribe to the discussion theory outlined in the last paragraph.

However, there are car guys who do indeed hide the costs from their wives and play with marital fire along the way. It shouldn’t be a surprise when these cats find themselves in divorce court-right beside the guy who hid the cost of his girlfriend from his bride.

The fifth and final reason for case divorce is pretty simple: many spouses view a garage full of assorted old car parts and tools in the same light as a low rent club filled with strippers and a pole. Never lose sight of this grim factoid and be prepared to counterbalance the garage with a new kitchen.

The renos will be cheaper than a competent divorce lawyer.