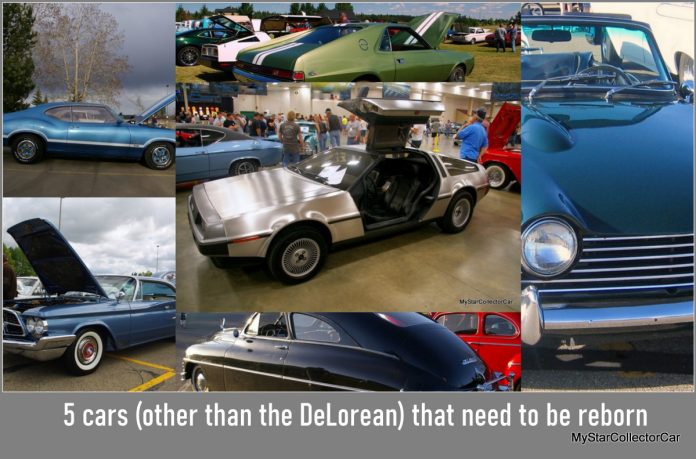 DeLoreans have been on the brink of a comeback since 2016, but NHTSA (National Highway Traffic Safety Administration) regulations have hamstrung the future of these ‘Back to the Future’ classics.

Now a small builder like DeLorean 2.0 can build 325 cars a year without being drowned by tidal waves of bureaucrats so the question is simple. What other cars need to be reborn?

The list won’t include cars like 1st Gen Camaros or Mustangs because you can literally build a complete version of either car from a catalogue of parts. On the contrary—this list is all about cars that never get the press, but need to be reborn with new tech under the skin for power, handling and braking.

The first car is the 1950 Packard. Packard was definitely living on the back 9 of the automotive golf course in 1950,but they still built a cutting-edge car. The fastback roof was in its sunset years, but Packard built a classic with a low-slung body that breathed life back into an old look.

The 2020 version of this Packard would dump the straight-8 in favor of a more exotic engine like the 3.5  460-horse Ford Coyote engine. Coil-over front end, independent rear end and giant disc brakes would make this new Packard the coolest 85 mile-per-hour car on the freeway.

The second car that needs a rebirth is the 1960 Chrysler 300F. This 413 cubic inch, dual quad, 375 horsepower early muscle car was a monster back in ’60 and it was a big chapter in the Mopar letter car history, so a comeback makes a lot of sense.

The 2020 version of the 300F would be even more awesome with a 1000-horsepower Hellcrate 6.2 Hemi under the hood – the original was cool, but this reboot would be dangerously cool.

The third comeback classic is the ’68 Triumph TR250. These cars were the next-to-last incarnation of the classic British sports car and they left the factory with a 111 horsepower straight-six under the hood.

The 2020 version of the TR250 would be a lot nastier with a BMW N55 3.0 315- horsepower inline-six. That combination would propel the TR250 from a cool old British car to an unspeakably cool blur that just passed you doing Warp 4.

American Motors merged with Chrysler so the only thing under the hood would have to be the 6.4 Hemi because a 315-horse AMX is a force – but a 485-horse AMX is insane.

The DeLorean is poised to make a comeback and that’s cool but in a perfect world all five of these cars would be reborn because that would be five times as cool.