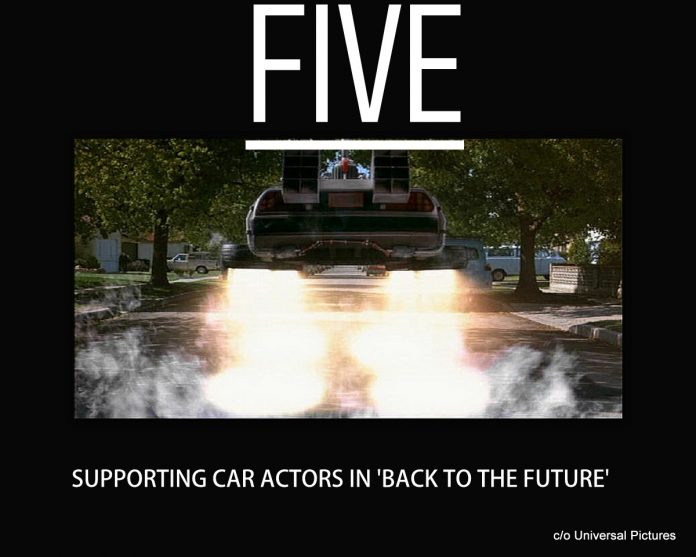 There’s no question the DMC DeLorean is the car star of the movie ‘Back to the Future’ because they gave it a leading role in the movie.

Leading actors rely on supporting roles in every movie, because one guy doesn’t carry the film–with all due respect to Star Trek’s William Shatner.

The first one was a 1984 AMC Eagle wagon. This car would have been almost new when the film was made–you could easily call this an 80s version of the SUV because it was a refined, family-friendly form of a 4×4.

AMC was onto something with the Eagle, but its fate was sealed when the name faded away in 1988. The Eagle was gone–but not forgotten–because it lives on in the form of every SUV you’ve ever seen.

There was a 1964 Chevy Suburban in ‘Back to the Future’. These were a truck version of the station wagon, so they were bigger and brawnier than a typical long roof.

Most families used conventional wagons to haul their boats and trailers, but if you really had common sense, the Suburban could handle bigger loads. The Suburban is closer in spirit and purpose to today’s mega-trucks than it is to yesterday’s station wagons.

The ’55 Dodge Coronet in ‘Back to the Future’ was a welcome sight because 1955 is when Virgil Exner began to showcase his style at Chrysler.

The ’55 Dodge was a big leap forward from the taller, bulky previous versions of the previous models, so the car is a nice fit for going back and forth in the automotive universe. Chrysler called this The Forward Look era for a reason–the Dodge was a nice touch for a movie set in ‘55.

There was a 1949 Packard Custom Eight Victoria in ‘Back to the Future’. This was fitting because the Packard was ahead of the Big Three in style at this point.

The ’49 Packard Custom Eight made the ’48 Chevys, Fords and Plymouths look like the warmed-over pre-war models they were at that point. Ford would catch up with their 1949 shoebox lineup, but Universal Pictures inserted a classic in the movie with this Packard.

The fifth car from ‘Back to the Future II’ was a 1951 Nash Statesman. These cars were built during the Kelvinator bathtub era, so they had all the styling cues found in the Nash lineup at the time.

You couldn’t mistake a Nash for any other car in 1951–or any other year–because they cut their own swath in style and function. This car was a natural in a ‘Back to the Future’ supporting role–they picked a great example for the movie because the’ two-tone ’51 Nash really popped in the scene.

The ‘Back to the Future’ franchise was based on the DeLorean, but the supporting automotive actors painted the scenery for the movie.

Here’s to the Best Supporting Actor awards that never were awarded back in the 80s.