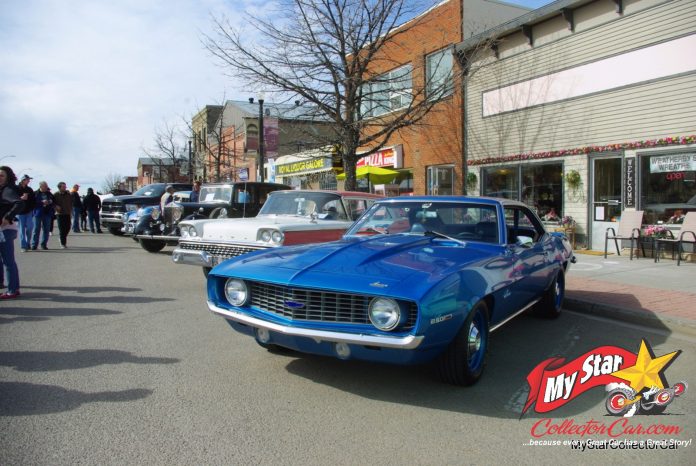 The ’69 Camaro is one of the most obvious cars you’ll see at a car show.

The rarest ’69 Camaros are the six-cylinder cars–in fact, the convertibles are the rarest in the 1969 Camaro production run. Paul McGurran knew his six-banger ’69 Camaro was rare when he bought it back in 1990, so he went down a different road with his future plans for the car.

Paul decided to protect the basic history of the car because he was only second owner. The first owner had protected the car from harsh Canadian winters to the point where he pulled the carpets out of the car before every winter storage.

The car had 69,000 original miles on the clock, and it was a completely rust-free car in an area where cars were rusted out in a few years. There was a little accident damage, but this car was pristine overall. There was a 250 straight-six under the hood and no radio, so this was a barebones car. Paul still has the original headlights and he reports, “they still work”.

Paul marches to the beat of his own drum so he resisted the advice to simply plunk a 383 crate engine under the hood and become another clone ’69 Camaro with a V-8. He wanted to respect the history of the car and enhance it at the same time.

He focused on the potential found in the inline six–Paul found that potential in a big way. He rebuilt it with forged pistons, steel rods, solid lifters, EFI and a big turbo. That’s a Christmas list of every cool thing you could do to a humble six-cylinder engine.

The results are staggering. Paul’s Camaro registered 420 horsepower on the dyno with a relatively mild boost on the turbo. He added a 5-speed manual to offset the 3:73 rear gears to come up with an amazing 24 miles per gallon on the road.

Paul went with a combination of stealth and show on his ’69 Camaro because the car still carries its original 250 badges so there is definite truth in advertising. It also runs its original dog dish hub caps but now it also has a rear spoiler and a bulge in the hood that tells the world this Camaro 6-banger might have some bite.

Paul built the car to drive so his Camaro sees a lot of open roads on the way to car shows. The disc front/drum brake back setup has been more than adequate for a car with three times its original factory horsepower.

There are very few future plans for the Camaro, but Paul may repaint it after all those years of road wear and he’s toying with concept of a big boost in the turbo. The car turned out exactly how he wanted it too because Paul swam upstream on conventional thought and kept the 6-cylinder.