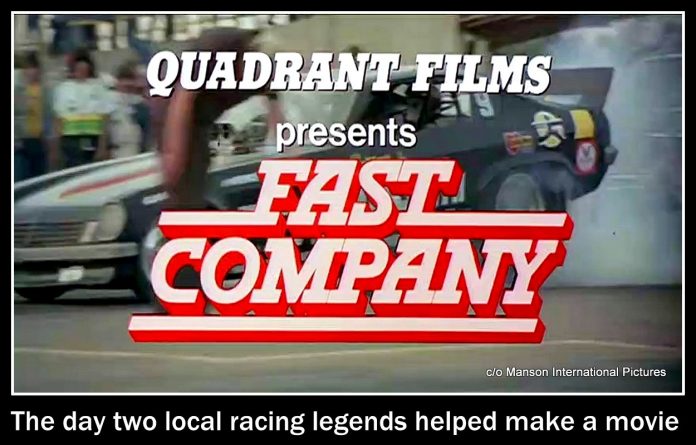 ‘Fast Company’ was a 1979 action movie that hit the big screens and celebrated drag racers who embraced life ¼ mile at a time. The movie’s director was David Cronenberg, the creative force behind numerous Hollywood horror movies such as 1986’s ‘The Fly’ remake.

The movie’s list of actors included William Smith, best known for his bad guy role as Falconetti in ‘Rich Man Poor Man’ and Claudia Jennings, best known for her bad girl role as 1970’s Playmate of the Year.

For us here at MyStarCollectorCar, the real stars of the show were the track cars, along with some Red Deer, Alberta Canada car guy celebrities who were an integral part of ‘Fast Company’ during its 1978 filming in that Canadian province. The drag racetracks used in the Alberta portion of the movie film were situated in Calgary and Edmonton at the time, with most of the filming taking place in and around the greater Edmonton area.

The notable Red Deer, Alberta car guys included 2016 Canadian Drag Racing Hall of Fame and 2007 Canadian Motorsport Hall of Fame inductee Geoff Goodwin, a legendary car guy who was inducted into the builder category because of his incredible commitment to the sport. Geoff was a pioneer in the development of the Edmonton International Speedway in 1967, along with the Castrol Speedway that succeeded it in 1990.

Geoff was already a very dedicated ¼ mile guy, both as a driver and builder, prior to the filming and provided fast iron for ‘Fast Company’. He stayed out of the limelight for the picture, but most people in the Alberta drag racing world were keenly aware of Geoff’s large contribution to the flick.

Unfortunately, Geoff Goodwin passed away in February 2018, but not before he became a legend in the Canadian drag racing world.

The other Red Deer, Alberta car guy legend in ‘Fast Company’ was the late “240 Gordie” Bonin. Gordie cut his drag racing teeth on both the Edmonton and Calgary tracks before he embarked on a stellar career as an NHRA Funny Car racer south of the border during the 1970s and early 1980s.

Most car guys like the rhyme scheme behind 240 Gordie’s name because it is a fitting nickname for a guy who broke through the 240-mile barrier on numerous occasions in a ¼ mile race. Just for the record, a 240-mph funny car was not a typical event when Gordie rocketed down the track over 40 years ago and hit that mark.

Gordie was one of the best in the funny car business when he was asked to participate in ‘Fast Company’ as the real driver behind the wheel of a movie mechanical rocket. Gordie’s cinematic driving adventure included a wild stunt in which he broke down a warehouse door with the car and drove the track-only funny car on the streets of Edmonton. It was a jaw-dropping moment in ‘Fast Company’ and Gordie’s memorable drive was not a computer generated/special effects shot.