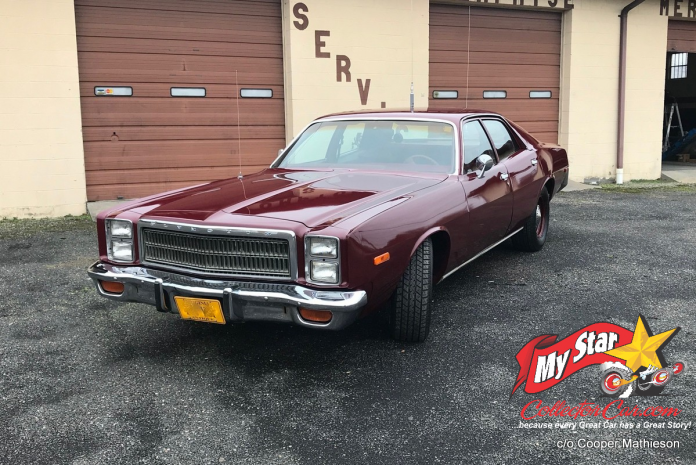 Vintage police cars are spiking in interest because they’re a piece of history – the key word is history.

The biography of an ex-police car is important because the build sheet is comparable to that of a Hemi ‘cuda, so if the numbers don’t match, the story doesn’t hold up.

Fortunately, Cooper Mathieson has the real thing because he is the proud owner of a 1978 Plymouth Fury . He’s had it for a few years as he explained: “I have always wanted a ‘78 A38 U-code 440 Plymouth Fury.  I bought the car about 2 and a half years ago out of Fredericksburg, Maryland.  I had been looking for an ‘78 Plymouth (ex-VA state police or NC State Highway Patrol car) — and one day while I was at lunch with my father, a good friend called and told me about this one.

Cooper had a great starting point with his Fury: “The car was in very good shape — mostly original other than paint”.

There were a few details that jumped out: “The car had an A-pillar spotlight which VA State Police did not put on the unmarked cars. VA State Police bought relatively low-option cars, so it has AC and that’s about it. It’s a radio-delete car with cloth seats and rubber floors”.

Cooper’s Fury had a few sins under the skin: “The floor pans were in bad shape — rusted from the inside out due to the rubber floor covering that was originally installed. I had a local body shop replace the floor pans and remove the spotlight and refinish the A-pillar”.

This car saw a lot of miles in its day, but now it’s semi-retired: “I don’t drive it much because it’s used basically as a show car, but I do drive it some. The car has loads of power and handles very well for a ’78. Trust me when I say you don’t pass many gas stations. The 440 cars have a smaller gas tank due to the dual exhaust. I drove it to Washington DC about 4hrs last year for Police Week”.

Ex-police cars are definitely crowd favorites as Copper explained: “This car gets more attention than any classic car I have owned. Everywhere I drive it, the Fury normally has a few people looking at it and a lot of thumbs up”.

Cooper has a simple game plan for the Fury: “I am trying to keep it as original as I can so I’ll probably just leave it as is”. He’s the right guy to own the ex-police car because he truly respects its history.