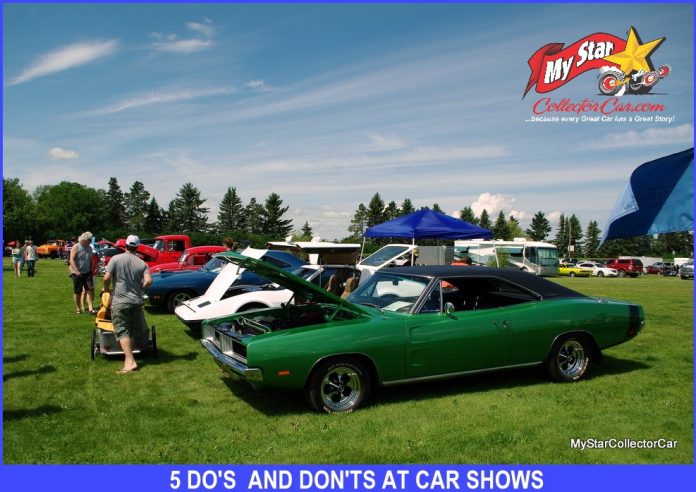 Summer is the right time of the year for car shows because any car guy who is a member in good standing with the sanity club will not bring his beloved ride to a January car show in a geographical region where winter has a death grip on the weather conditions.

The retro rides may have been driven to a winter destination during their long histories, but they were new and the only available transportation in yesteryear.

MyStarCollectorCar would like to offer some advice to car show attendees, participants, and organizers regarding successful shows. We have attended car shows for several decades and done MyStarCollectorCar articles about them for the past 13 years, so we have seen and experienced hundreds of shows over the course of time.

Our first order of business is to thank everyone who is involved in a car show, whether they are participants, organizers, or supporters, because successful events need all three groups.

The key to success requires cooperation from all three parties, including our first suggestion: Do not under any circumstances touch the show vehicles in any way, shape or form-unless the owner invites you to touch his or her prized vehicle. The owners will likely have an enormous investment of time and money in their vehicles, so they are understandably concerned when their car becomes a playground for somebody’s unruly kids or a fire hydrant for somebody’s mutts at the show.

The rule of thumb here is dependent upon whether you would let a herd of strangers come into your house and fondle your possessions or spouse.

The second item on MyStarCollectorCollectorCar’s list relates to another “Don’t” behavior issue at shows: Do not drive your vintage ride like a jackass at or near the car show. For some reason (presumably an uncontrollable need to be the center of attention), some insecure car guys will put on a tire-squealing smoke show when they drive by or leave a car show.

They will get the spotlight for all the wrong reasons because of their moronic stunts, but organizers will get the heat for these attention-craving clowns’ decisions to make a lot of noise and possibly put the show’s location in peril by waking/angering up the neighbors. Don’t do it, people over the age of four are not generally impressed with these antics.

Thirdly, do ask questions at a car show. Most owners are very proud of their vehicles and are more than willing to talk about their vintage rides. Imagine the owners are excessively proud parents of kids in organized sports and you will get the picture.

There are many reasons why the owners chose to restore, resto mod, or hot rod their vintage vehicles and these endless variety of back stories are the basic building blocks for most MyStarCollectorCar articles about the vehicle. There is no downside to get the story behind the vehicle at a car show for us or you.

The fourth item on our agenda is another do: Do become a volunteer for a car show. Every successful car show has a willing army of volunteers whose efforts ensure car show participants and visitors thoroughly enjoy the event.

There is an enormous amount of effort behind a good car show and the devil is in the details for organizers. The more the details, the greater the need for volunteers to make the show a success.

The fifth and final addition to our list is another “Don’t”: Do not use the volunteers as a convenient lightning rod for rude and thoughtless complaints. They are volunteers, so they are unpaid employees who donated their time and efforts to a car show.

The upside for volunteers is every time a legitimate concern or observation is delivered in a well-reasoned and civilized manner. The downside is every time they get blasted by a whiner with an axe to grind. Volunteers for any event are a scarce breed, so MyStarCollectorCar does not want to see the car show volunteer herd thinned by bad behavior.

Enjoy the show and keep our “Do’s and Don’ts” list in mind while you’re at a car show.