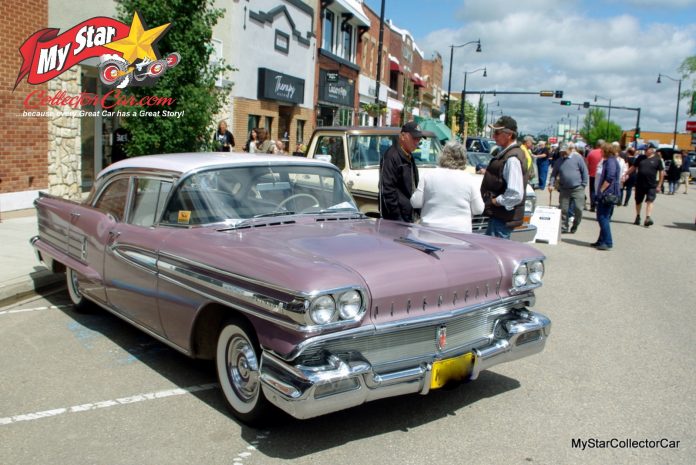 The 1958 Oldsmobile Super 88 is everything that was right about late 1950s domestic cars.

Every car guy in the known universe already knows the back nine of the Fifties domestic car market was dominated by vehicles with massive amounts of chrome, horsepower, and fins. It was a winning combination that did not go unnoticed by General Motors’ Oldsmobile division because their cars had all-of-the-above in generous portions.

MyStarCollectorCar spotted a beautiful 1958 Olds Super 88 sedan at a summer car show and immediately recognized this car was in amazing original shape, so it was a true survivor in the finest definition of the term.

The ’58 Olds still had its original two-tone paint job that consisted of subtle violet shades that showcased the bold color approach taken by car manufacturers during the Fabulous Fifties.

The car also has its original interior, powertrain, and windshield, complete with a Banff National Parks sticker from the 60s.

The newest feature with the 1958 Olds is its young owner, a dedicated car guy named Robert Smith who just happens to have been born in the late 1990s. The obvious question for MyStarCollectorCar is simple: Why does a kid from the last stages of the second Clinton term have a car from the Elvis era?

The answer is also simple: The Olds was purchased in the early 1960s by his maternal grandfather. However, Robert never met his grandad because the man passed away in 1981, but the car was a legacy vehicle that clearly reminded Robert’s mother of her dad, so his mom became the Olds Super 88’s custodian when Robert’s grandmother wanted to sell the car. His grandma was also onside because she sold the car for a dollar to Robert’s mother.

The good news was the car remained in the family. The bad news was 35 years in long storage is very hard on cars so the Olds required some attention before it could be brought back on the road.

Additionally, a deadline was looming because Robert wanted to drive the Olds to his high school graduation and was not optimistic that it could be resurrected in time, according to Robert’s father, Randy.

The happy ending to the graduation story is Robert and his dad Randy were able to get the ’58 Olds back on the road in time for the graduation. MyStarCollectorCar will go out on a limb and guess that Robert had the coolest set of wheels at his graduation.

An even happier future lies ahead for the 64-year-old Olds Super 88 because Robert has no intention of altering the car. Instead, he plans to maintain the car in its original condition, free from future chops, channels, or slamming his vintage ride.