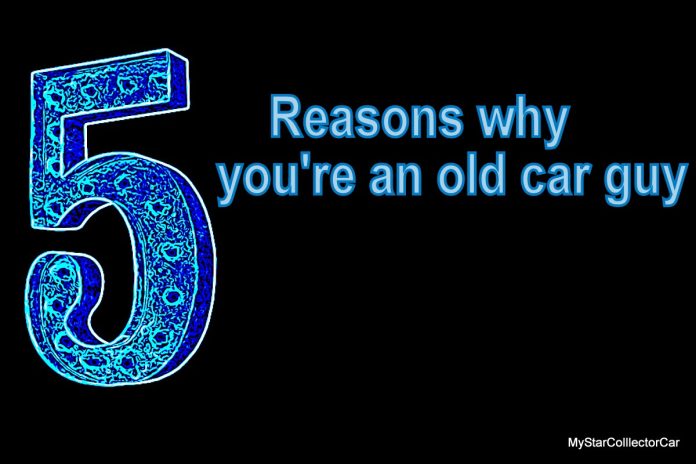 Car guys come in every age group, although a case could be made for larger per capita buy-in from older members of the hobby.

Car guys from a bygone era had a different spin on their personal interests and confined them to a real world filled with internal combustion vehicles that delivered real world car experiences, be they driving them or fixing them. Old car guys were fortunate enough to grow up during a time when advanced technology consisted of a radio in the vehicle.

It was a simpler time compared to today’s complex cyberworld where yesterday’s big block cubic inches take a backseat to terabytes in the hearts and minds of younger generations. Consequently, a great divide exists between old school car guys and new age nerds who look through a screen and not a windshield to view the world.

MyStarCollectorCar leans heavily toward the old car guys’ philosophy because we are a part of it and grew up in a computer-free world, unless one includes the treacherous but crude collection of electronic whistles and buzzer contraptions in the original Star Trek series.

Therefore, we believe we are well-qualified to showcase five ways that old car guys come from a different automotive generation.

Our first example is a foot operated dimmer switch that was used to control the headlights’ intensity. The most common version was a small cylinder located on the left side of the brake pedal on a domestic car. This version has been used in many photo puzzles in a “what’s this?” challenge because the foot operated dimmer switch disappeared long before many younger car guys were even born.

Interesting factoid: the foot speed of an annoyed driver with a floor-mounted dimmer switch was faster than a frenzied Keith Moon in the middle of a kick drum solo with The Who. Just not as rhythmic.

The basic manual tranny coordination between clutch, foot and hand is a foreign concept to people who have grown up in a world where they only have to put the car in the right gear selector to move forward or backward. Therefore, mastery of a manual transmission is a lost art for many younger car guys.

The fourth component of our retro car guy list is wind noise. Modern vehicles are airtight climate-controlled four wheeled fortresses of solitude that keep things quiet when passengers are watching a movie.

Old car guys grew up in noisy vehicles with leaky vent windows and am radio that could barely be heard above the roar of outside traffic at highway speeds, particularly giant semi-trucks with a Lego block design. Old car guys mastered the fine art of simple sign language on long road trips, along with an ability to control car sickness while reading comics under these conditions.

The fifth and final addition to our old car guy list is most can solve the mystery of the missing gas filler location. Last summer MyStarCollectorCar brought a car with a gas filler hidden behind the rear license plate to a full-service gas station that did not allow self-service. We decided to let the cocky young female attendant immerse herself in massive confusion searching for the gas filler location before we intervened and pulled back the license plate. Mainly because we were on a road trip and in a time crunch.

Gas filler locations could be found behind the rear license plates on many cars from a bygone era, as well as under rear taillights in some of them. Today’s GPS systems are an excellent way to find something in this world–just not hidden gas filler locations on old cars.