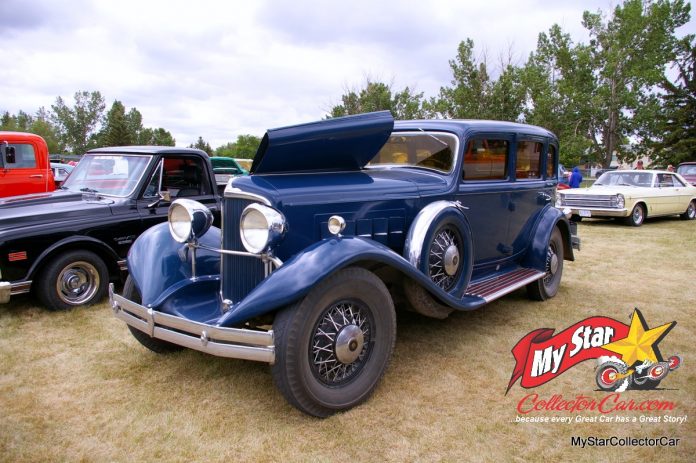 The REO Motor Car Company was the brainchild of Ransom E Olds, the famous name behind the Oldsmobile.

One of his flagship entries was a big luxury sedan that debuted in 1931 as an REO Royale. Unfortunately, the onset of the Great Depression was a big financial blow to REO Motor Company because few customers could afford the luxurious Royale sedan. Nevertheless, REO had no choice but to soldier on and push the Royale in the automotive market.

One of the 1931 REO Royale sedan models was sold to a Montana judge who was able to afford the car- but was not a young man at the time. A young couple admired the vehicle, although they were not in the right financial position to own it.

However, they were on friendly terms with the judge and were shocked when he decided to give the ’31 REO Royale to them at no cost after he was no longer able to use it. Bear in mind the stylish pre-war classic had a minimal number of miles on it, then and now.

Unfortunately, the young couple were not able to enjoy their good fortune because the husband was killed in an industrial accident and left behind his wife and their two young boys. She struggled to raise the children on her own and stored the car for many decades before one of her sons sold the REO Royale to its third owner about five years ago when the car had logged only 10,800 miles on the road.

The car’s third owner is Joe Asuchak and he pursued the car for many years after a lengthy search for its owner. Joe’s search began at a car show in Great Falls, Montana about 20 years ago when a casual conversation with another car guy indicated the car was in that region.

The search region included both Great Falls and Butte, Montana as possible locations for the car, so Joe began a phone search based upon the description of the car’s owner, an elderly woman who lived in either one of the two Montana towns.

Eventually Joe connected with her in Butte, but she was not interested in selling the car. Instead, she asked him, “Who are you and what do you want?”. Undaunted, Joe kept in contact with her and one of her sons–just in case she changed her mind. Unfortunately, she passed away, but her son decided to sell the car to Joe because it was stuck in permanent storage at a small auto museum in the Whitehall, Montana region and the son wanted it back on the road.

Joe was the right choice because he is a dyed-in-the-wool REO Motor Car Company fan and would not alter the Royale because he respected its originality. The car had not been run for many years, but Joe managed to get it started in only a few hours after he became its owner.

Joe believes in exercising his Royale and has logged about 2000 miles behind the wheel since he became owner, but the 80-year-old car still has less than 15,000 miles on it. The car is an incredibly smooth runner and is comfortable at about 45-50 MPH, although it may even be faster because Joe just replaced the car’s original tires with bigger tires.

The Royale has a unique chassis lubrication system that allows owners to grease all the relevant chassis parts via a mechanism under the hood. It also has an original vanity mirror that Joe has not seen with other REO models from the same era.

The upscale Royale has an interior light system, along with running board lights that showcase its luxury car pedigree.