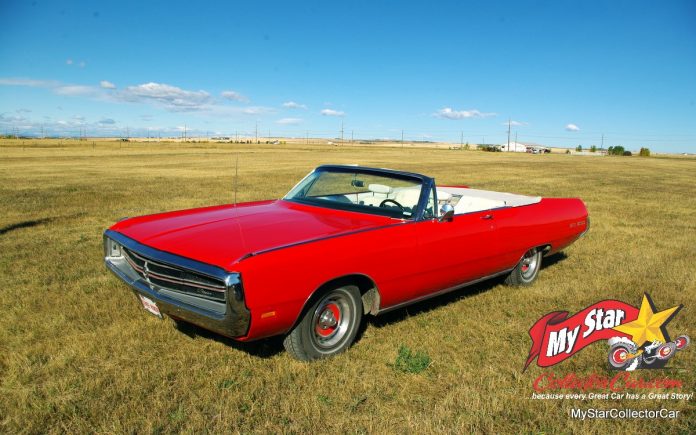 Car guys have many fears about their beloved cars and one of the big ones is natural disaster.

Natural disasters can range from hurricanes to tornadoes to massive blizzards to floods.

This 1969 Chrysler 300 convertible was a victim of the last one on the list.

Tom Codd has owned it for over twenty years and he thought he had his big Mopar stored in a safe place when a flood hit his hometown. The river hit an area of town that was in the flood zone but when the water rose it circled back and hit his part of town. He admitted, “I forgot I even had it sitting in the garage” when the river rose but he definitely remembered the car when the flood took hold in the town.

The result was disastrous. The convertible was flooded to the top of the windshield posts so the 300 was a soggy mess. Tom had to make a decision on the car because it was a write-off in the eyes of his insurance company. His only option was to save the car himself.

Water is a huge enemy of old iron, but flood water is worse because it’s muddy and contaminated with stuff that would scare the life out of hazardous material technicians. This 300 was no exception so Tom had to put together a solid game plan to save the big convertible. He said, “it was full of debris” so that was his first priority.

The next thing on the list was the metal and Tom found a solution in the form of linseed oil. He rubbed the car down in “every place he could get to”, and this process saved the metal.  That turned out to be the easiest part of the salvage.

He ran some diesel fuel through the system of the 440, and it did fire up, so he ticked the engine off the giant recovery list, but there were many other problems to address.

The seats were a soggy mess and Tom said, “they weighed four times as much”, so he had a big job ahead of him. He tore them apart and found out “the springs were rusty and the foam was shot”, so he had to replace those parts. The seat frames were salvageable after a thorough sandblasting and painting. Tom found out the original seat covers survived the flood, so he did get some good news after all the bad news.

The electrical system was a nightmare. The harness was in good shape, but every junction and relay “was corroded and rusty”, so it was a painfully long process. Fortunately, Tom had a buddy who saved the day because a flooded convertible’s electrical system posed many challenges.

Tom is back behind the wheel of his ’69 Chrysler convertible thanks to a huge effort from his car buddies — and determination on his part. His motivation was his long-term relationship with this rare Mopar, plus he loves driving the car. He has no trouble putting big miles on the 300 because it’s such an easy car to  drive on a highway cruise. Tom said the only issue is “it’s a little noisy in the wind – like all old cars” .

The 300 is also a daily driver but he does admit the gas mileage “is in the single digit range”, because the 440 is a very thirsty big block.