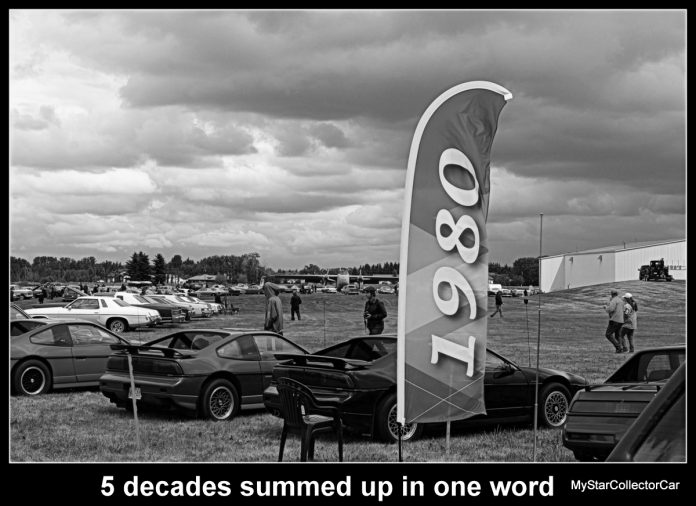 There is an old saying: “Above all-be brief”.

Nobody really wants to read ‘War and Peace’ unless they are serving mandatory 25-to-life in a maximum-security prison or doing time in a Literature degree program in a university course where this book is mandatory reading. Either way, ‘War and Peace’s sheer size will suck the joy out of most readers’ lives, including what little joy is left for convicted felons and college students.

Therefore, for the sake of brevity, MyStarCollectorCar has condensed an entire decade of automotive history down to one word for each decade during the post-war era. The downside is each of our choices will need a lengthy explanation about why we chose the word.

Our first decade is the 1940s and we chose “Optimism”.  The decade began on an extremely grim note because most of the free world was already engaged in a European battle that became World War Two, so optimism was a rare commodity at the onset of the Forties.

However, the Allied forces had a sense of optimism based upon their ability to win the war-and that mood continued during the post-war period when cars once again replaced tanks and warplanes on North American assembly lines.

Optimism reigned supreme for domestic car manufacturers by the end of the 1940s when they debuted their new look models and prepared for a dynamic new decade.

The 1950s represented one significant highlight in MyStarCollectorCar world: “Bling”. The concept of bling on cars was not a new idea in the Fifties, but this decade was the best example of what happens when shiny objects like bumpers and exterior trim are taken to an extremely generous level.

Most car guys already know most people will confuse chrome with stainless steel when it comes to 1950s rides. Even though we at MyStarCollector recognize the difference between chrome and stainless steel, we just call it bling-and 1950s cars had plenty of both shiny objects.

The 1960s was a dynamic decade in many ways, including cars. The best way for MyStarCollectorCar to describe the Sensational Sixties is simple: “Muscle”. The Sixties was a decade when men landed on the moon, but most car guys likely believe most of the brute force street machines would have beaten the Apollo 11 spacecraft if it was rigged out for a quarter mile race.

Cars got fast and furious by the end of the 1960s because the Big Three car makers took no prisoners in their horsepower wars.

The 1970s was also a time of upheaval for the domestic car market. Horsepower took a huge nose-dive, engine exhaust was scrubbed through a catalytic convertor, and MyStarCollector focused on the one major cosmetic change found on 1973(and newer) cars: “Bumpers”.

The new bumpers were designed to withstand a minor parking lot collision-and looked the part in some cases. Initially, the 1970s bumper legislation seemed to catch domestic car builders off guard because automotive style got run over by a sturdy state-mandated bumper.

Last, but not least, are the 1980s and MyStarCollectorCar focused on one word for the decade: “Turbocharger”. The death of the muscle car era during the early 1970s meant Detroit had to milk more power out of smaller engines to deliver a balance between horsepower and MPG.

The turbocharger provided a significant horsepower boost for four and six-cylinder engines when they were used in smaller and lighter domestic cars that were also the order of the day during the 1980s.

The marriage between engine and horsepower was perfect when Buick introduced its lightning fast GNX in 1987. Because of its sophisticated turbocharger, this six-banger Buick road rocket would have beaten most big block muscle cars from the 1960s.

Five different decades and five single words to describe them.

SEPTEMBER 22 MSCC FIVE FOR FRIDAY: FIVE REASONS WE LIKE THE...