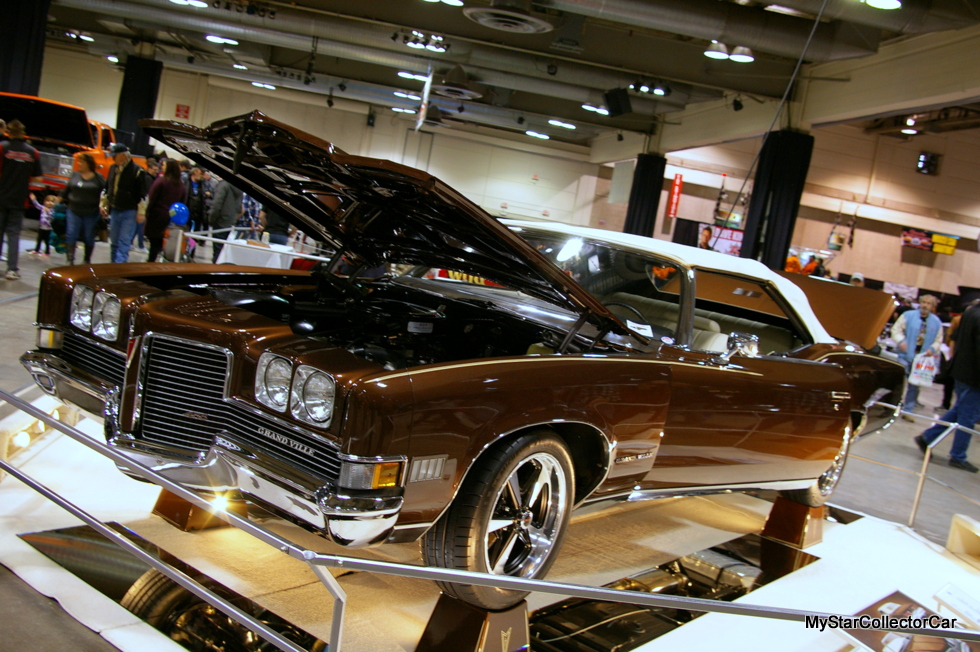 MyStarCollectorCar spotted a 1971 Pontiac Grand Ville convertible at a car show and were instantly impressed with the quality of the restoration on the car.

The Poncho was a feature car at the Calgary World of Wheels/Autorama show and was rightfully up on four tire pedestals to showcase the undercarriage of the restoration.

Owners Eric and Tracy Drinnon were the proud owners of the Pontiac ‘vert built during the early segment of the Me Decade and they deserve all of the credit for its stunning restoration. 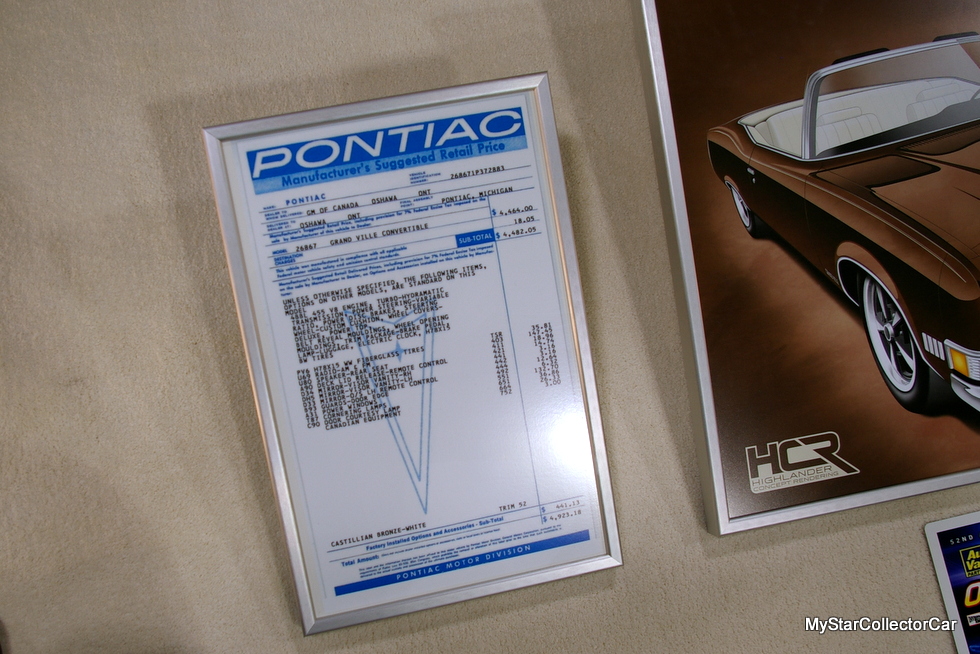 Eric inherited the car from his late father and told MSCC that he began the restoration in 2013, a year before his father passed away in 2014. Eric recalled his dad’s reaction to the restoration; “It’s a stupid idea”, but Eric had too many fond personal memories (including time with his father) about the car to stop the project. 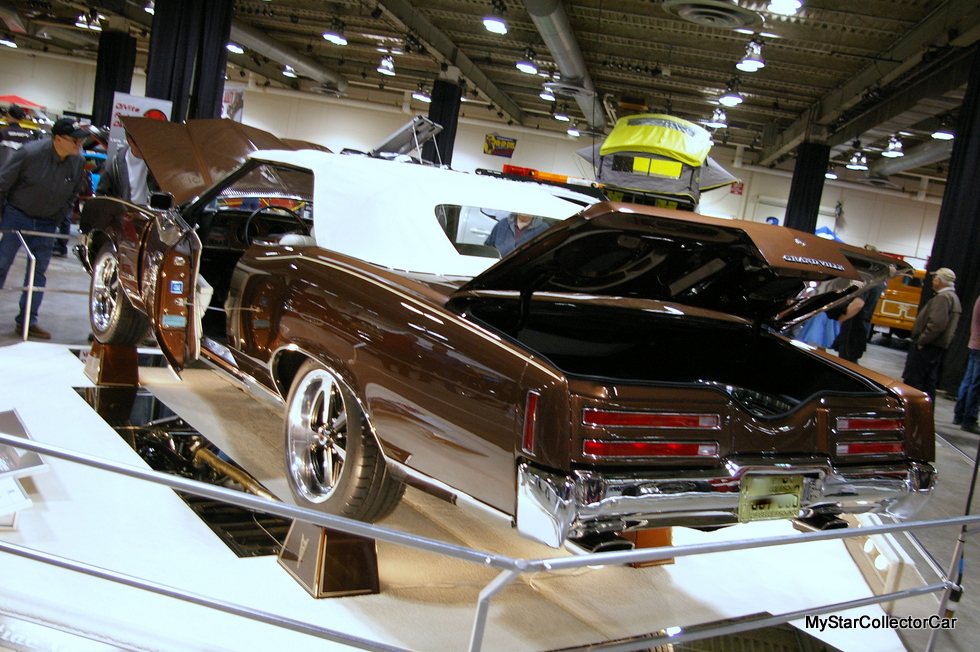 Eric recalled his younger days when he and Tracy used the car–they were high school sweethearts. The memories continued for the young couple because the Pontiac was used as a wedding car for them.

Eventually, the stylish convertible was also fitted with car seats so Eric and Tracy could fit their young family in the back seat of the car. 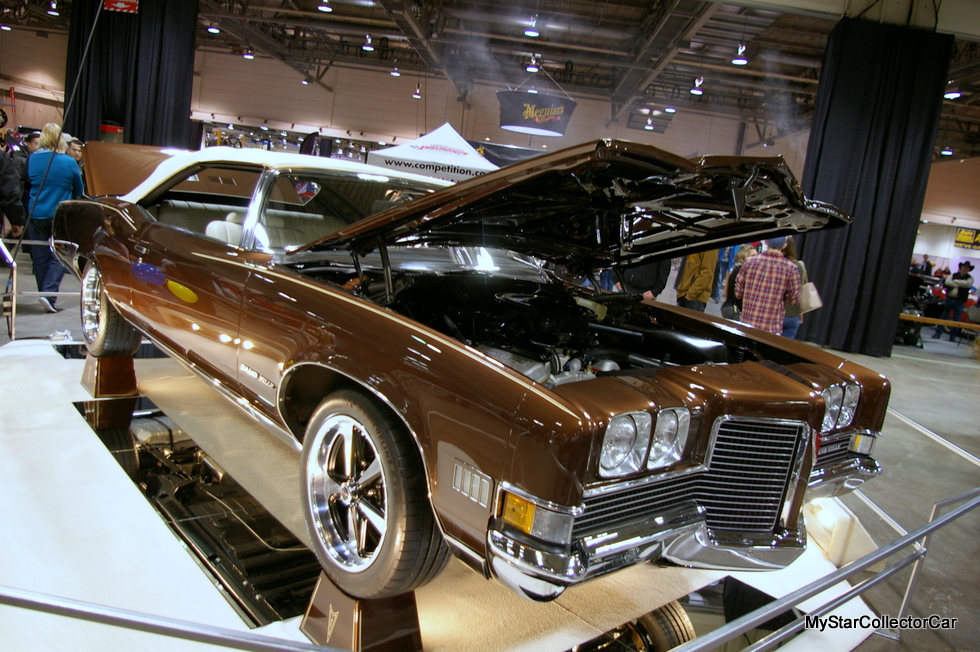 In fact, their son and daughter grew up with the car and it was used for their high school graduations.

The Pontiac has become a “family member” in Eric’s words over the years so the decision to restore it back to its original showroom condition was an easy one for Eric and Tracy. 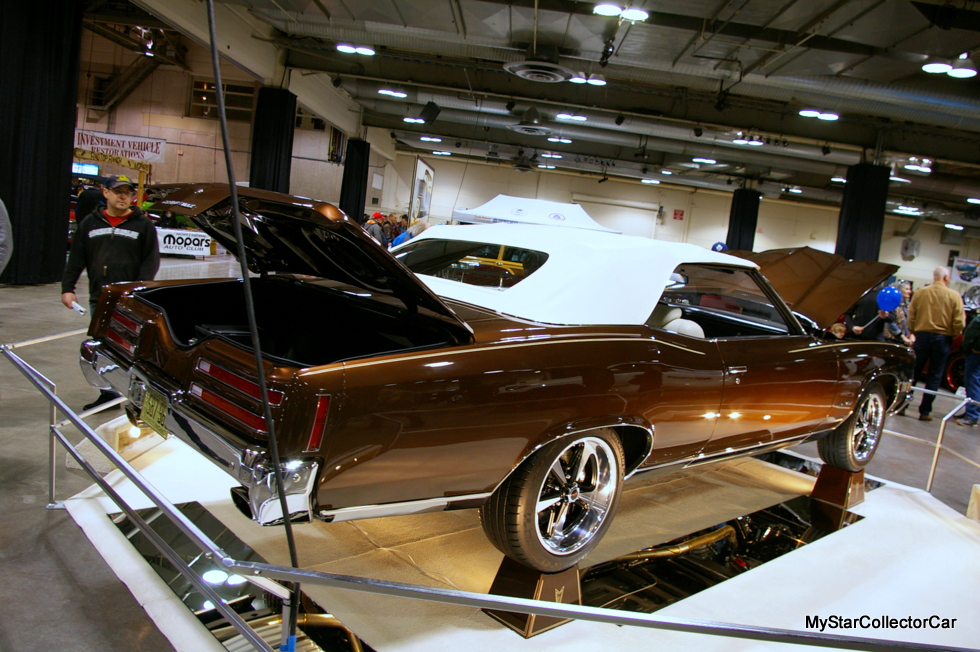 MyStar believes the car has even surpassed its original condition under Eric’s watch and now the mirrors under the car showcase the level of quality in the restoration process. Eric “wanted to make it a driver-but make it better”, in his words. Mission accomplished. 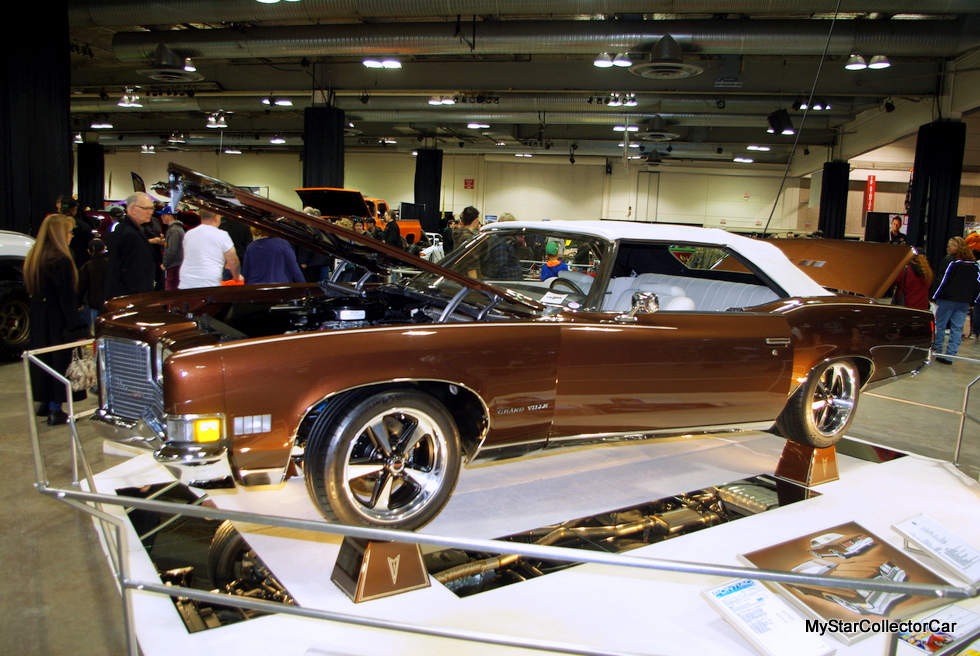 The car was originally bronze-colored and was actually a red convertible when Eric’s father purchased the Pontiac in 1987. Eric wanted to bring the car back to a stylish form of bronze so he chose Lexus metallic bronze for his restoration color. He also used a cream-colored leather interior and gave the convertible a new top. 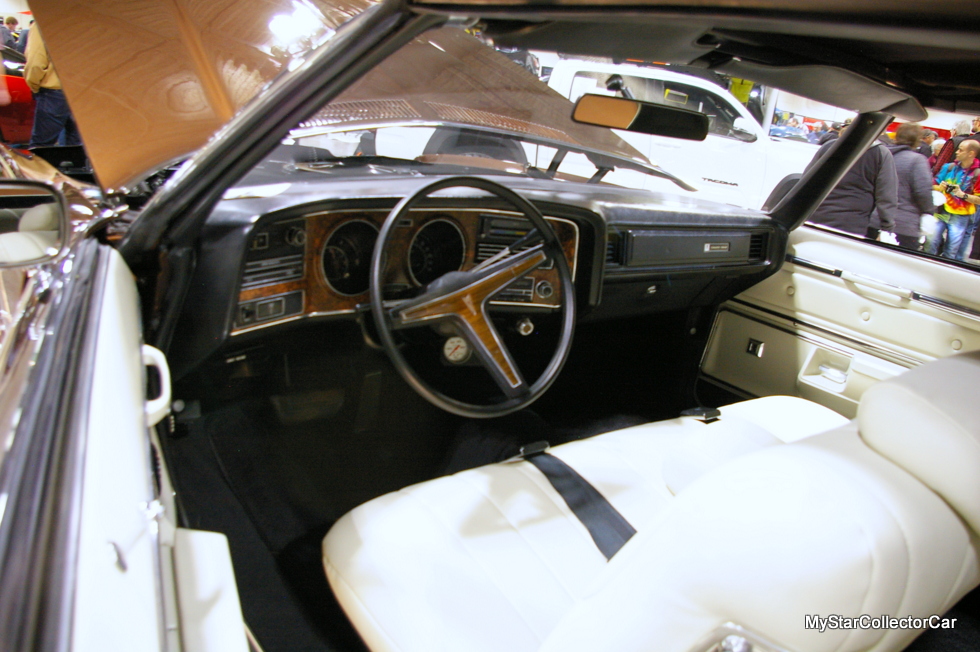 MyStarCollectorCar readers will notice the aftermarket four wheel disc brakes on the car. Eric wanted his big Poncho to slow down a lot more efficiently whenever heavy braking is required by circumstances. However, the car still retains its factory powertrain that includes a 455 four-barrel big block. 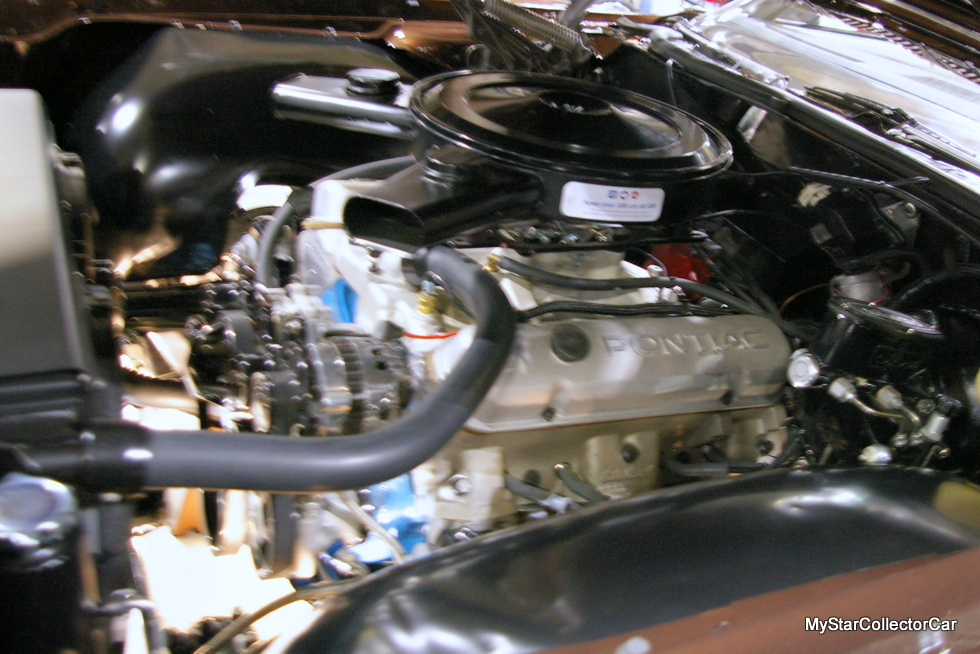 Eric managed to track down all of the correct decals for the car- with one exception: the tire jack instructions on the underside of the trunk lid. Eric explained how the convertible model has a different approach in the text so the instruction decals are rare because 1971 Pontiac Grand Ville convertibles are not common.

Their son and daughter were both at the show and share a deep bond with the car. Eric and Tracy have a tough decision to make in the future because their kids have a strong interest to keep the car in the family. 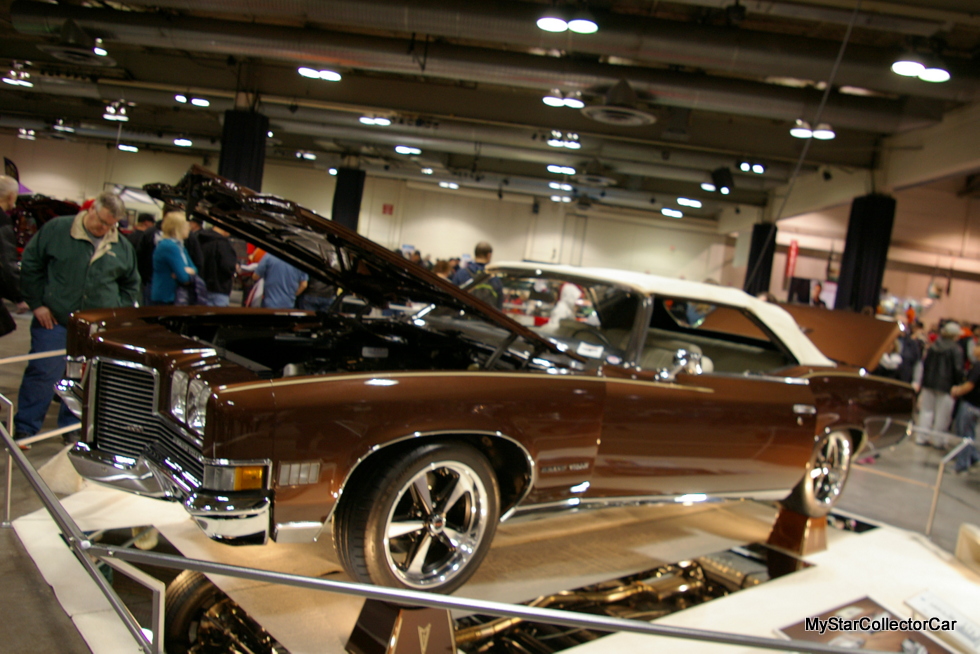 Eric and Tracy have not committed to the future ownership of the family heirloom, but Eric definitely wants a highly committed family owner. In fact, he joked; “If they come on hard times, they will have to live in a storage container-in the car”.