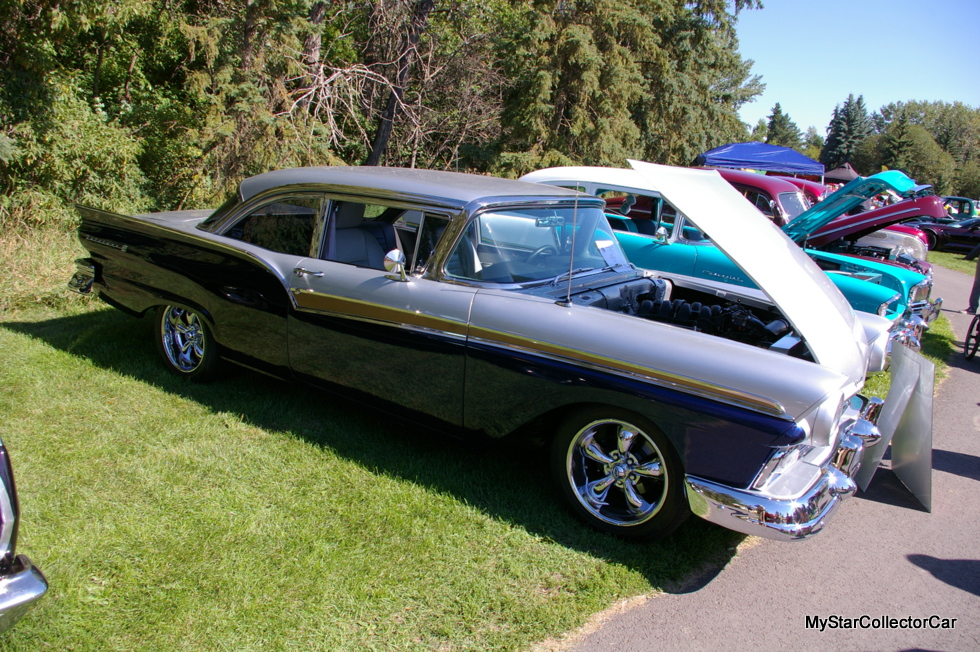 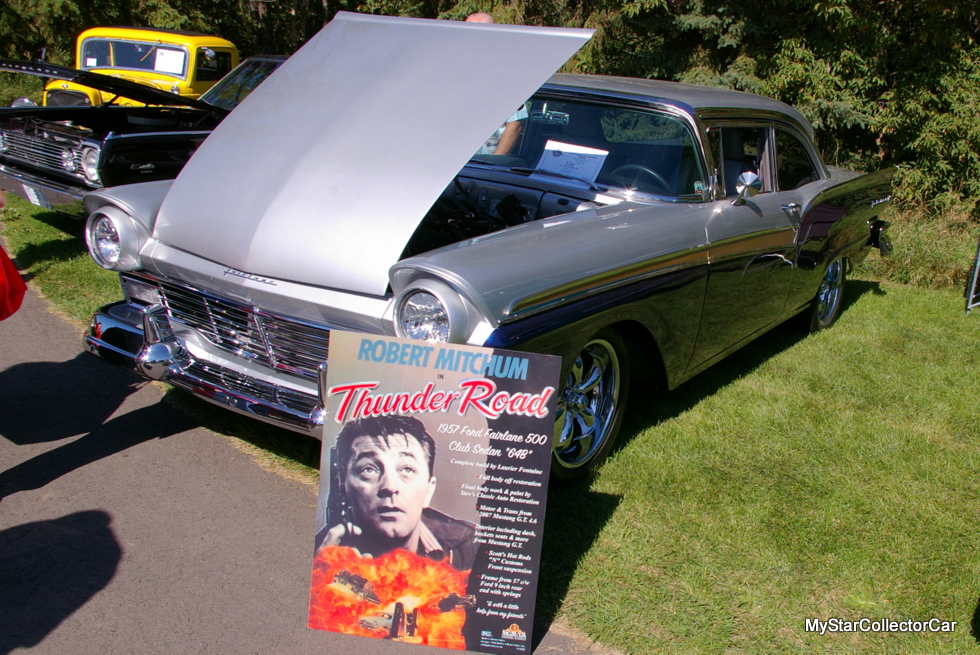 Robert Mitchum was already one of Hollywood’s biggest bad boy stars when he wrote and acted in ‘Thunder Road’.

The movie played to Mitchum’s strength because his character was an outlaw-ish good guy/moonshiner who ran from the revenuers in hot Fords.

There were plenty of action moments in the movie because Mitchum wanted to outrun both the law and other really bad guys in the cars. 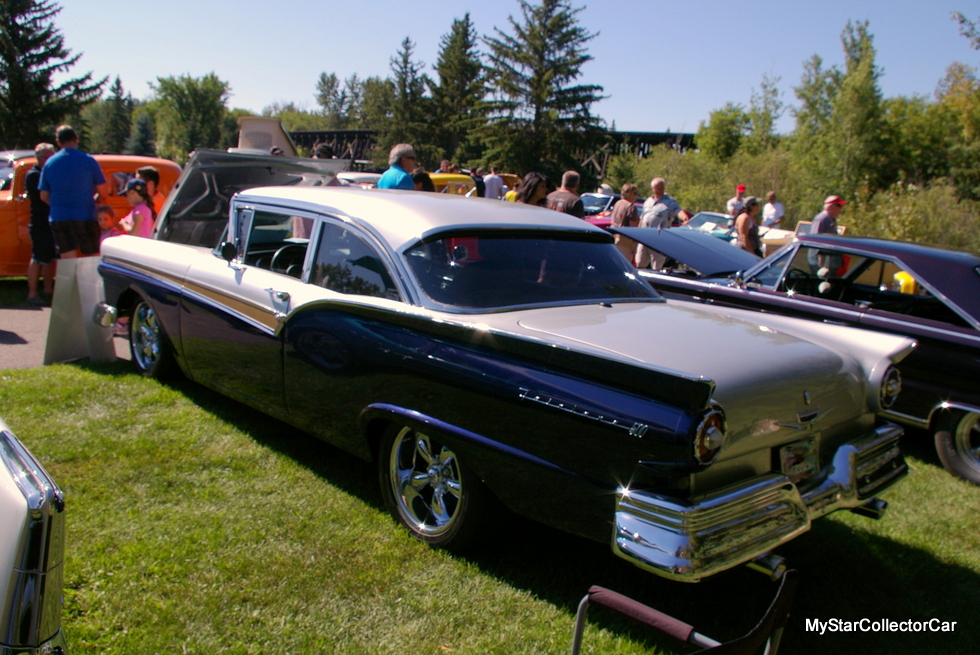 One of the cars was a 1957 Ford and it was considerably faster than the Mitchum character’s shoebox Ford in ‘Thunder Road’. The car chase scenes were the best (and only) reason to view the movie in the grander scheme of things.

None of the movie’s automotive impact was lost on Laurier Fontaine. He even owned a 1957 Ford when he was a young guy and always felt an urge to own another ’57 Ford.

Laurier managed to find another 1957 Ford at an opportune point in his life because he was a recently-retired welder and his ’57 Ford Fairlane 500 two-door sedan required a major amount of work in order to be ready for the road.

The original engine in the 61-year-old Ford was tired and needed to be replaced in Laurier’s opinion, so he bought a donor 2007 Mustang GT to use in the project. 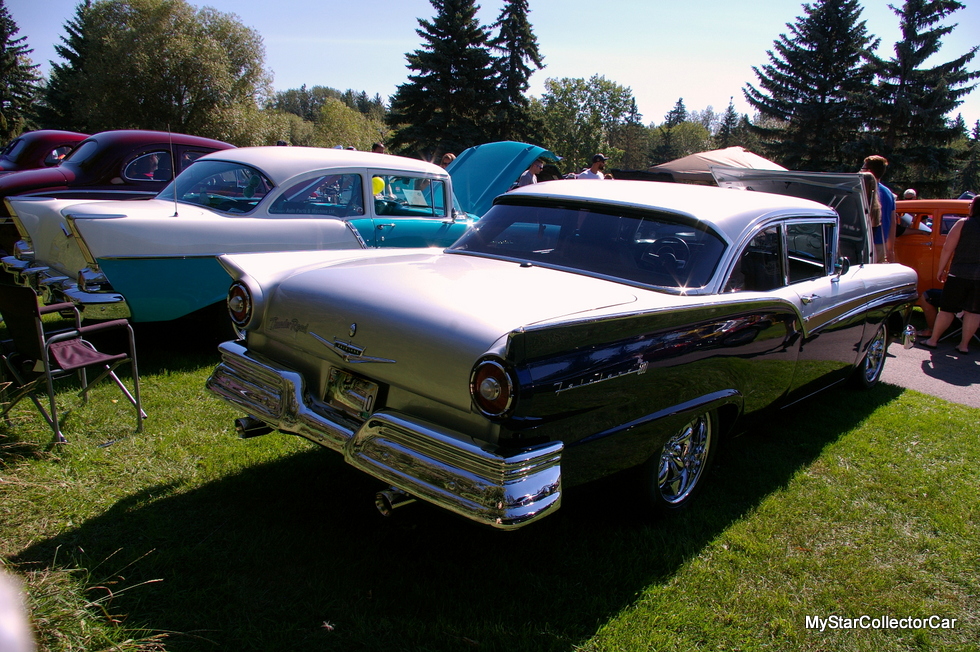 The Mustang had a modern 4.6 liter engine that produced 300 horsepower in stock form. In fact, the 2007 Mustang was one of the fastest production cars eleven years ago and managed to hit 0-60 mph in only 5.1 seconds. It was the perfect solution to Laurier’s power train issues in the 1957 Ford. 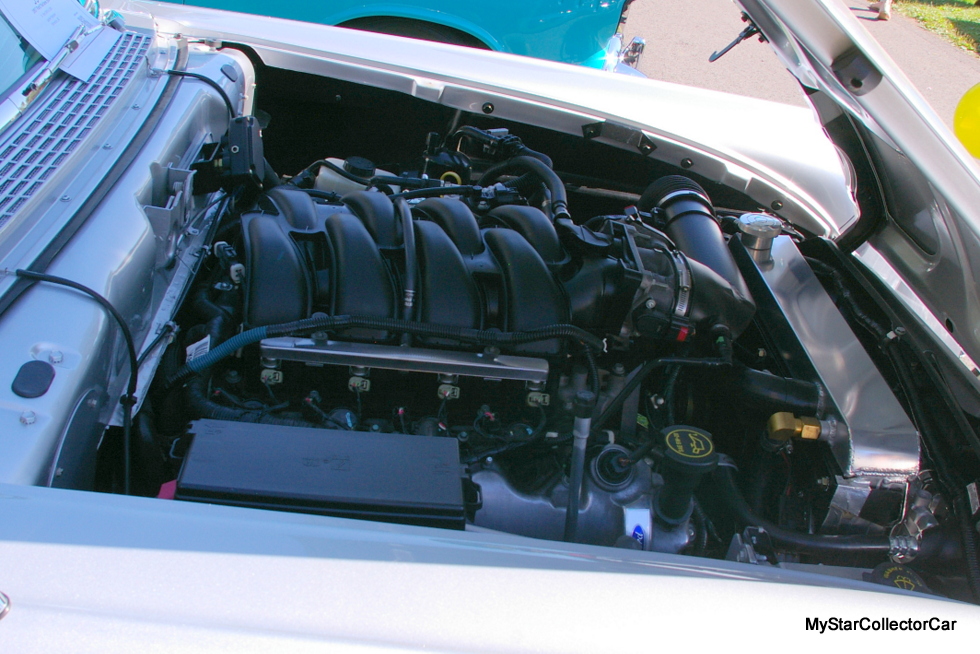 Laurier may have been a welder by trade, but he knows his way around a car project and was able to harness his considerable talents to make a 21st century car fit into a 1957 Ford. 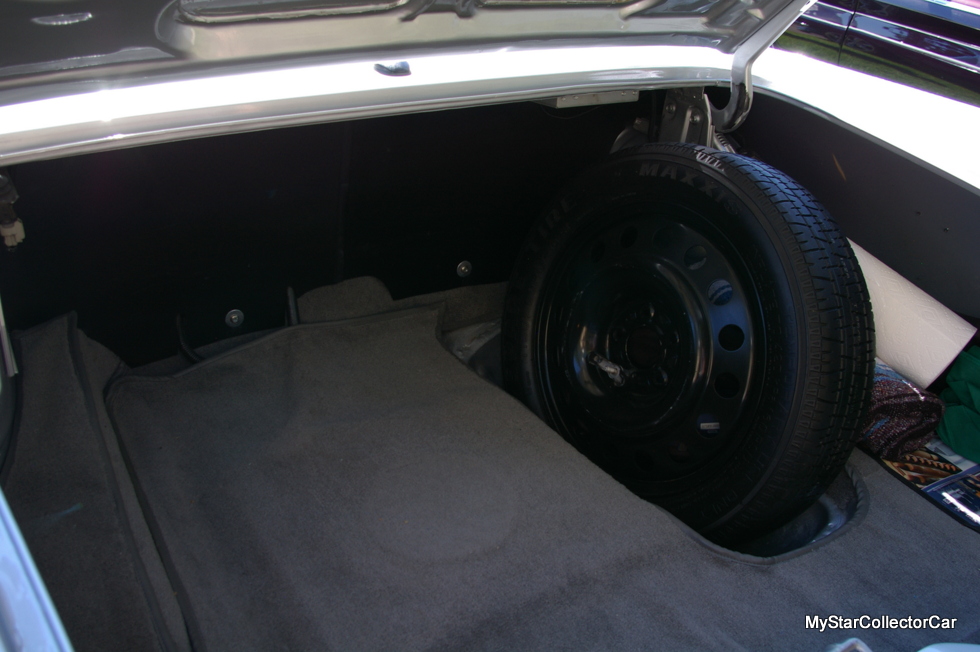 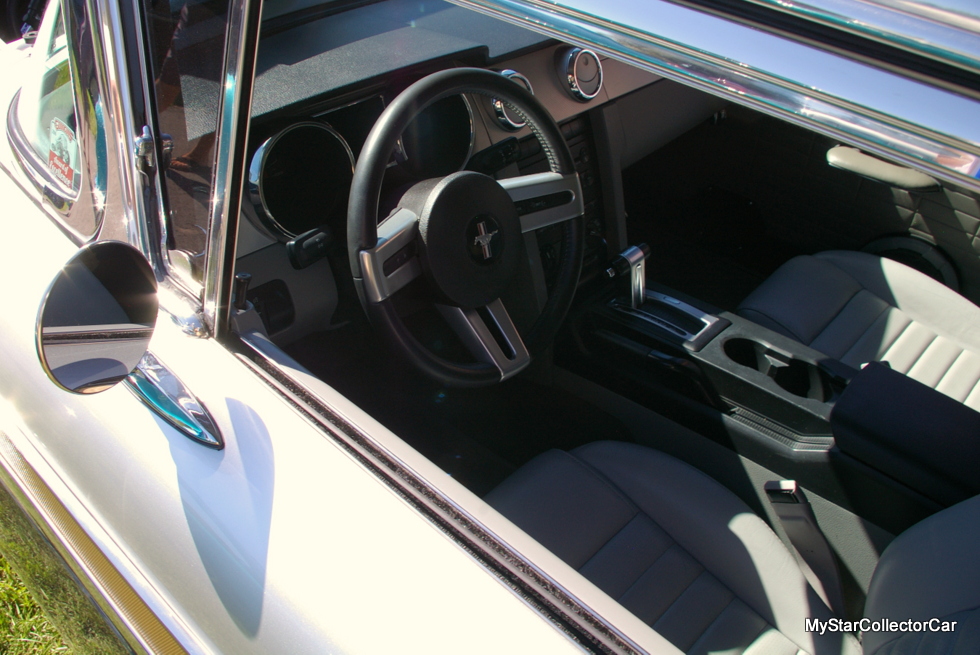 He also used the front seats out of the Mustang, but he kept the rear seat from the original Ford in the mix. 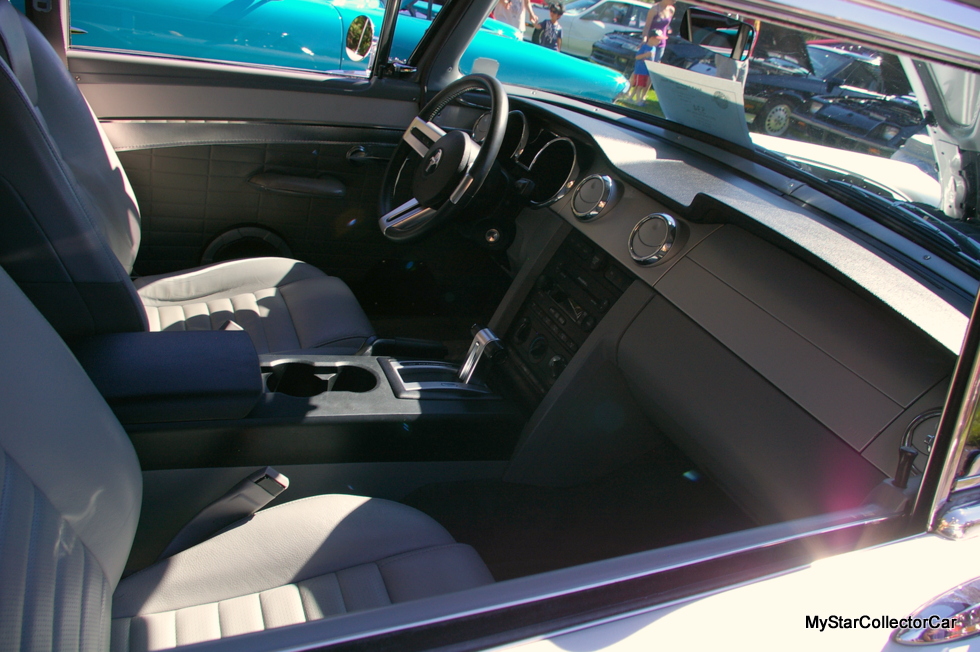 Laurier even kept the “pollution stuff” from the Mustang and used it on the Ford. In fact, the only major engineering item missing from the 2007 ‘Stang was the ABS system. 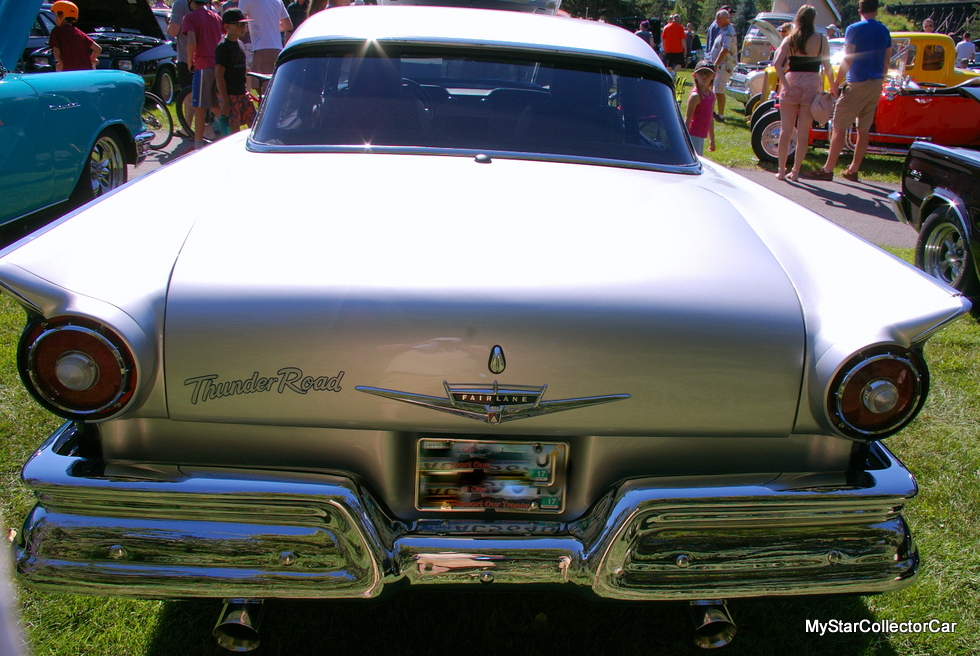 Laurier strayed away from the donor car when it came to the front end on his Ford project because he used an aftermarket system on the car. 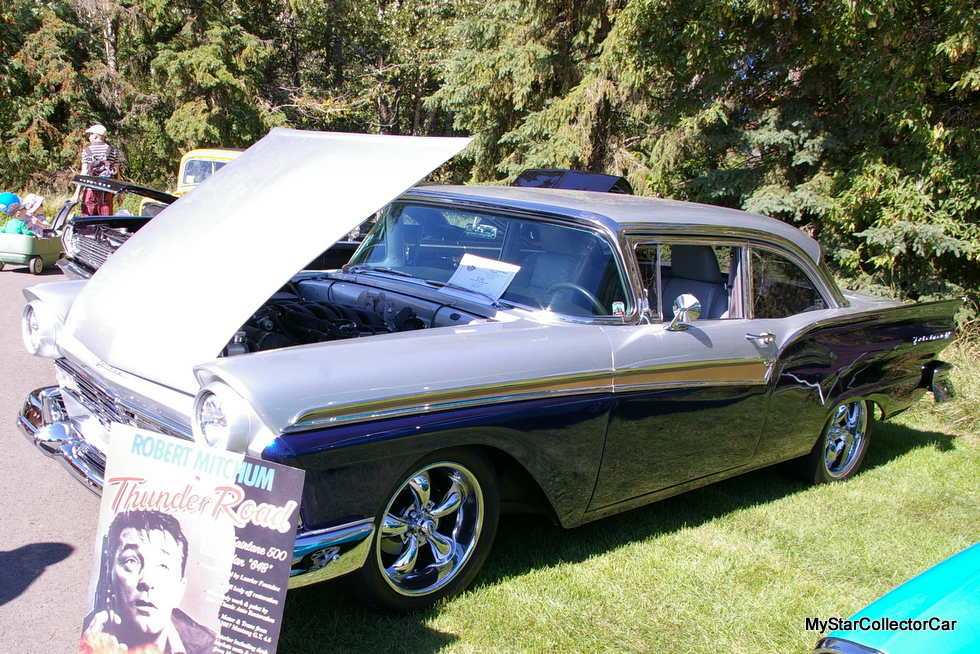 The result was a car that “drives down the road nice”, in Laurier’s words, but it was an 18 month process to essentially make a new age Mustang think it was still wrapped in its original 2007 sheet metal.

However, Laurier had both the time and talent to tackle the 1957 Ford resto mod project, He built a 1957 Ford that would have blown the doors off anything in ‘Thunder Road’. 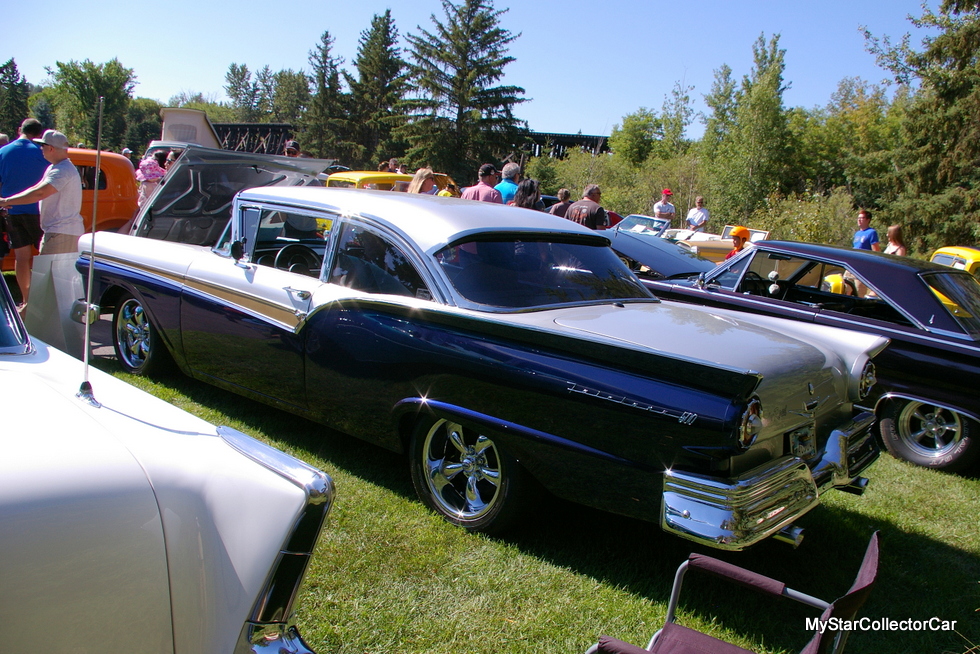 Laurier is also a car guy who believes in the anti-trailer queen philosophy, He put over 11,000 kilometers (over 7000 miles) on his ’57 Ford during its first year (2016) back on the road. In fact, Larry says his vintage Ford “has not been on a trailer since it was painted” and he has no intention of trailering it. 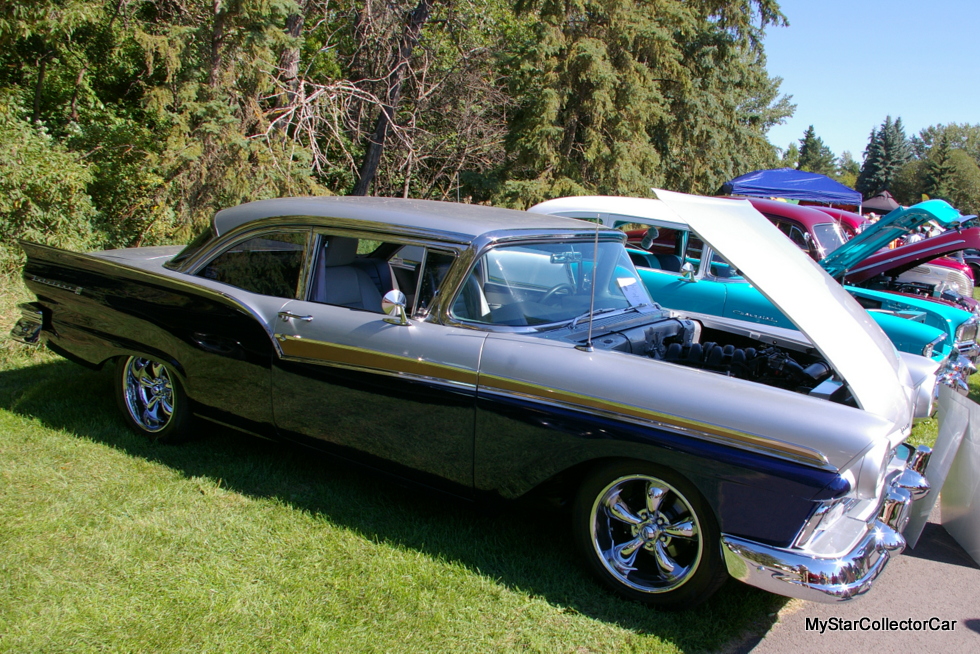