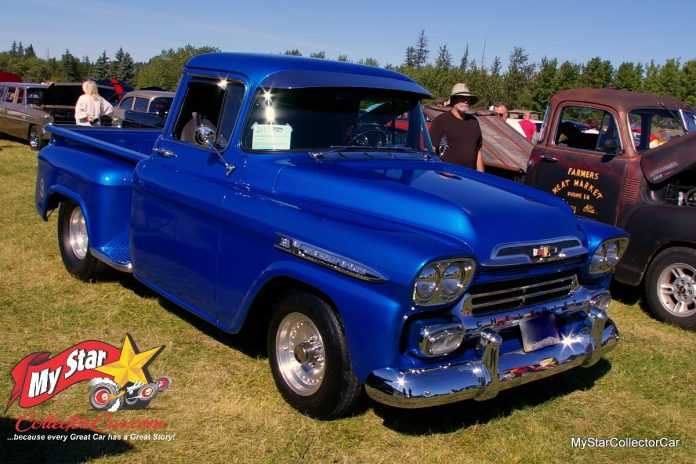 Colin Leney has always been a huge fan of the 1958 Chevy pickup because of its cool style, including the truck’s four headlight system, a GM design feature that was brand-new on their ’58 trucks.

Colin tackled the project on his own, even though he is not an automotive tradesman. Instead, he is a “farm boy” in his words, so Colin has plenty of experience in the mechanical and welding fields because most car guys who grew up on a farm learn these skills out of necessity.

The project involved a careful approach because Colin wanted to improve the ’58 Chevy while retaining its late 1950s feel when he gets behind the wheel. He knew his resto mod vision included more power under the truck’s hood, so Colin pulled the factory engine and replaced it with a 383 stroker engine.

Chevy’s 383 stroker is based on the famous GM 350 small block engine and is specifically designed to enhance the horsepower and torque in the 350. The extra power is very noticeable for car guys who choose this direction in a build.

The power factor was important to Colin-and so was his decision to bolt the 383 to a modern 4-speed automatic transmission with overdrive. The overdrive system is important because Colin added a Ford nine-inch rear end with 4:11 gears that would have the 383 screaming at highway speeds without the overdrive advantage. The truck’s low gears and brute force engine require delicate use of the gas pedal from a start because the Chevy pickup’s rear tires ”will chirp if you’re not careful”, according to Colin.

Colin removed the gas tank from its position in the Chevy’s cab behind the front seat because he wanted the extra legroom for comfort purposes, as well as an obvious safety factor when the gas tank is positioned inside the truck’s cab. The fuel tank was replaced by a fuel cell located in the truck’s bed.

The ’58 Chevy has an aftermarket steering column, along with an array of modern gauges to monitor the engine. Colin added an electric fan/new radiator cooling system to ensure his stroker engine will not overheat because “there is nothing worse than having all that power and overheating”, in his words. Just for the record, Colin has encountered no overheating problems with his resto mod truck.

As mentioned, Colin wanted to retain the look and feel of a vehicle built in 1958, so he kept the Chevy’s stock steering system in the project because Colin wanted to drive a truck that reflected the late 1950s driving experience.

One of the additions to the truck’s finish was Colin’s tribute to the late Gordie Howe (aka Mr. Hockey), a legendary hockey player who was from the Saskatoon area, just like Colin’s 1958 Chevy. Howe passed away right around the time Colin finished the truck project, so he added the # 9 tribute to the rear quarters on the Chevy.