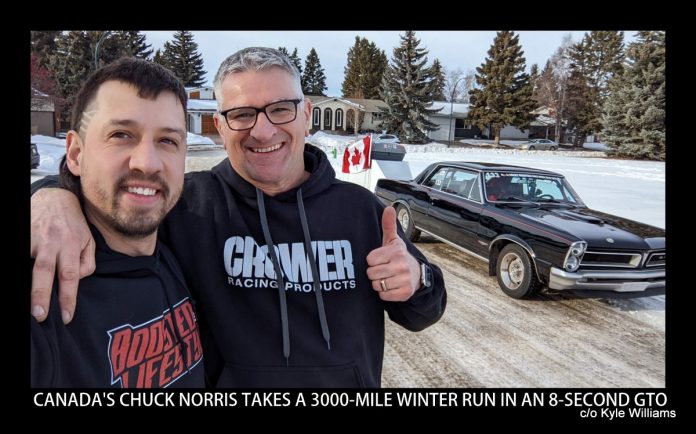 Richard Guido does not own a car hauler and has exactly zero plans to purchase one in the future, even though he is the proud owner of a 1965 Pontiac GTO that does 8 second ¼ mile passes and is also street legal.

For the record, Richard does own a trailer, but it is a small storage trailer that hauls his tools so he can work on his ‘65 GTO on the road to (or at) a track event. In fact, the trailer is about the size of a typical lawnmower hauler and rides behind the Goat on every road trip.

The idea of a drag-and-drive race event where participants drive from track to track to compete has always appealed to Richard in a big way, so he has attended at least a dozen of them over the past several years. Richard chose to drive the GTO from his home in Alberta, Canada to the drag-and-drive race weeks, but every one of the previous events took place during the summer months in North America.

However, Richard decided to start 2022 with a radically different game plan that involved a 3000-mile road trip to Florida from Alberta in the dead of winter behind the wheel of his ‘65 GTO. A stock 1965 GTO would be a handful in the middle of winter in Alberta, let alone a highly modified monster that now churns out about 1500 horsepower at the rear wheels in beast mode.

Nevertheless, Richard, his father Mike, and a rising YouTube star named Kyle Williams headed out on January 30th in the track car from Alberta to Bradenton, Florida for Sick Week, a new drag-and-drive multi-track event hosted in the endless summer climate of that region. Kyle was the rear passenger in the car because the Goat’s NHRA roll bars required a part-time contortionist to get in the back seat.

January weather in Alberta is a grim, cold game of craps played with heavily loaded dice in most cases, but Richard and his crew left for Florida on a decent day and stayed one step ahead of blizzards and sub-zero temperatures along the way. Those of us who live in Richard’s community will confirm that things got windier and much colder a few days after his departure for sunny Florida.

Bad weather would not have deterred Richard because the man is a fearless daredevil and was realistic about the possibilities of bad weather during the northern leg of his trip. However, the weather gods were not angry, and the Goat is fast, so Richard and his crew were able to get to Sick Week in Florida from wintry Alberta in less than a week, with only one mechanical hiccup along the way.

A broken mount for the upper control arm assembly was the issue, but Richard had one in his trailer, likely because he is a well-organized car guy who is ready for the road. The repair barely slowed down the Goat’s traveling trio and they were able to continue their 3000-mile journey in short order.