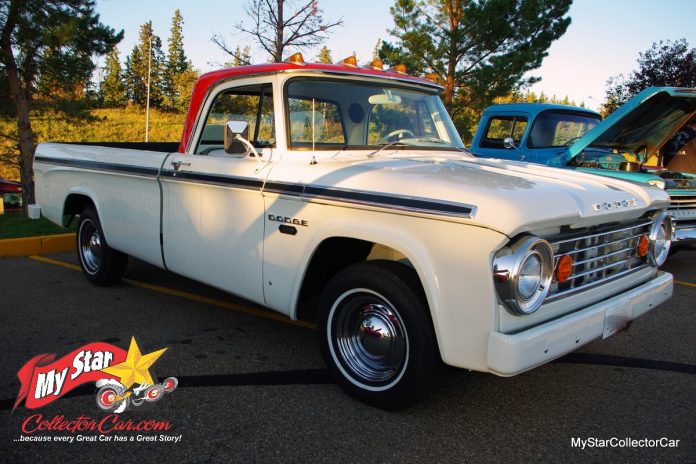 Keith and Robin Janes are two people who clearly like challenges in their lives.

Roger was a farmer at the time and used the ’67 Dodge truck for hard work. It is no secret the farm business is a tough one because farming is subject to both market and weather conditions that dictate success and failure.

Roger and his wife were forced to make a very tough financial decision when they left the farm and moved to Edmonton, Alberta with their young family from their northern Alberta farm to attend university in the early 1970s. They kept the Dodge truck and used it as a commuter vehicle in Edmonton for their three kids, including Robin.

Somehow the Dions managed to accelerate their four-year degree programs and both parents graduated in just 2 ½ years- while raising three kids.

The ’67 Dodge came with them when the Dion family moved to Central Alberta when the truck was used for their home-building project on a rural property where the truck hauled most of the construction materials.

Eventually the Dodge was retired to Roger’s father’s farm where it sat unused for many years. Keith and Robin decided to resurrect the truck, so they approached the current owner of Robin’s grandad’s farm. He was not receptive to the idea of letting the truck leave the property and would only let it go to Roger because he knew Roger was the original owner of the truck.

Keith was able to negotiate a deal where Roger was granted ownership and the land owner was given the first option to buy the truck if the ‘67 Dodge ever left the family. Additionally, the land owner wanted Keith and Robin to attend his community’s car show upon completion. Keith and Robin agreed to all three of his terms and intend to honor the car show clause in 2022.

The restoration process began in December 2019 and was completed in early September 2021. Bear in mind Robin and Keith had no experience in the automotive hobby, but they are fast studies who were able to learn from an experienced car guy along the way.

The truck was showing serious signs of wear and tear, along with decades of neglect after the Dodge was parked in 1982. The original 318 poly engine was beyond salvation, so Keith bought a low mileage 440 cubic inch engine out of a motorhome to replace the factory small block.

The new engine was bolted up to the Dodge’s original 3-speed automatic transmission with its factory dash-mounted shifter. Keith also added four-wheel disc brakes to help slow down the truck, given the 440 engine’s extra weight and horsepower.

The major issues on the family truck were serious rust problems. The restoration process required extensive metal replacement on the front and rear end of the Dodge, along with its inner steps and rockers. Its tailgate was a rusty mess, but Keith was able to figure out a custom fabrication process that included its original Dodge logo.

Eventually, the truck was ready for paint, so Keith and Robin deferred to a friend who painted it in an open building instead of a paint booth. Consequently, the Dodge required a massive amount of wet sanding to remedy the paint problems, a task that Robin tackled for countless hours to eliminate the paint job issues.

Keith did a ballpark on the amount of time the couple spent working on the Dodge’s restoration and estimates they put over 2500 hours into the project.

This beloved Dodge is back in the family in a big way, particularly since it means so much to them. The official unveiling took place in early September 2021 when its original owners (Robin’s parents) were shown a truck looked like it just left the small-town Chrysler dealership in 1966.