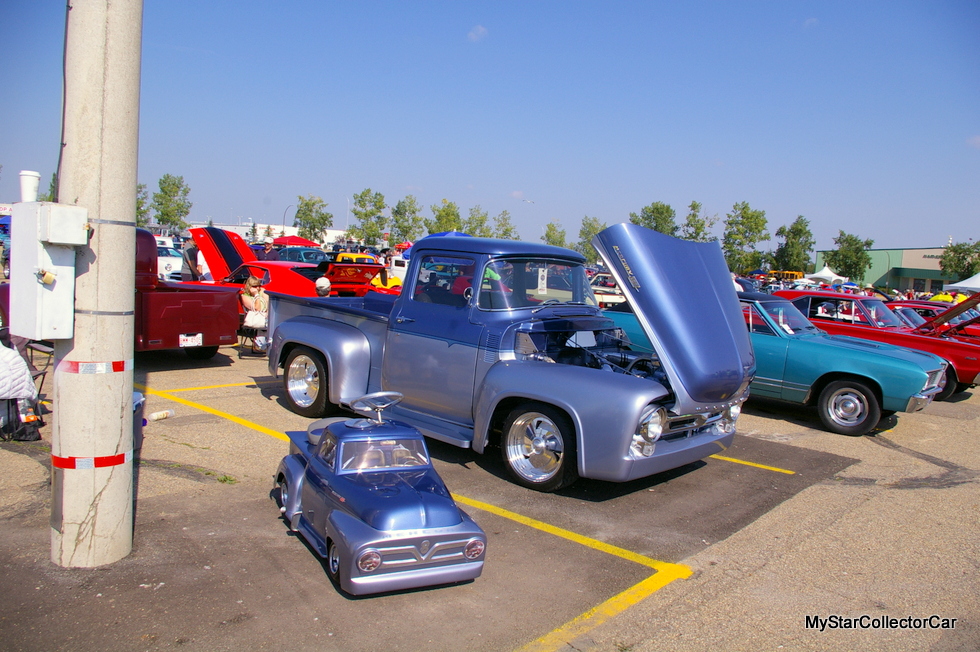 The Mercury name has long been associated with cars in the Ford family.

However, they did things a little differently in the Canadian Ford market because the Mercury badge was also found on trucks in Canada. 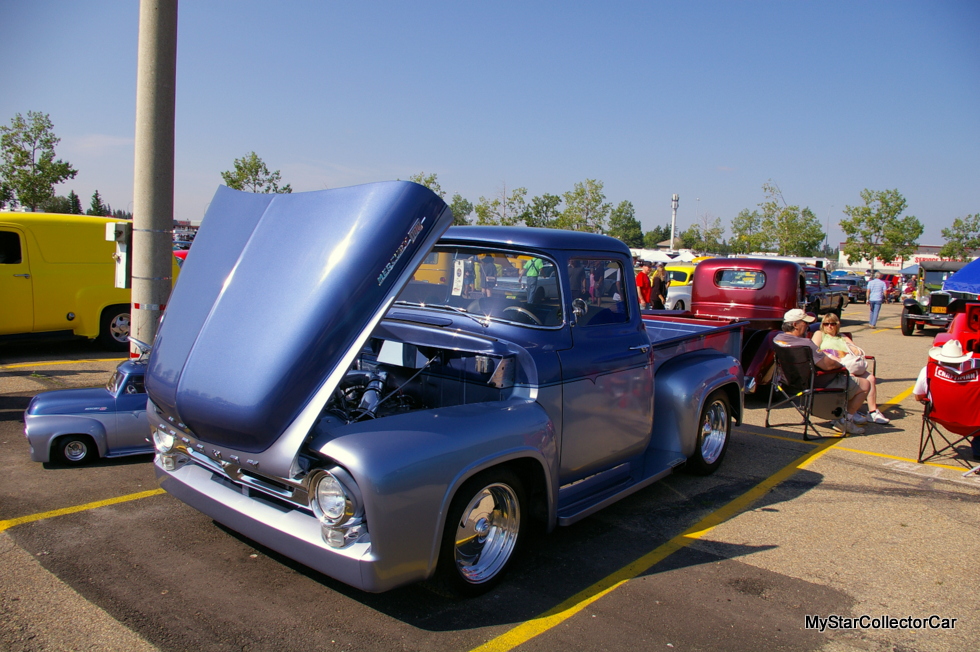 Mercury trucks have always been a source of conversation at car shows because Ford of Canada stopped production on these rare Canuck pickups in March, 1968. The end of the Mercury truck was part of the 1965 Auto Pact agreement that essentially integrated Canada and the United States automotive manufacturing market. 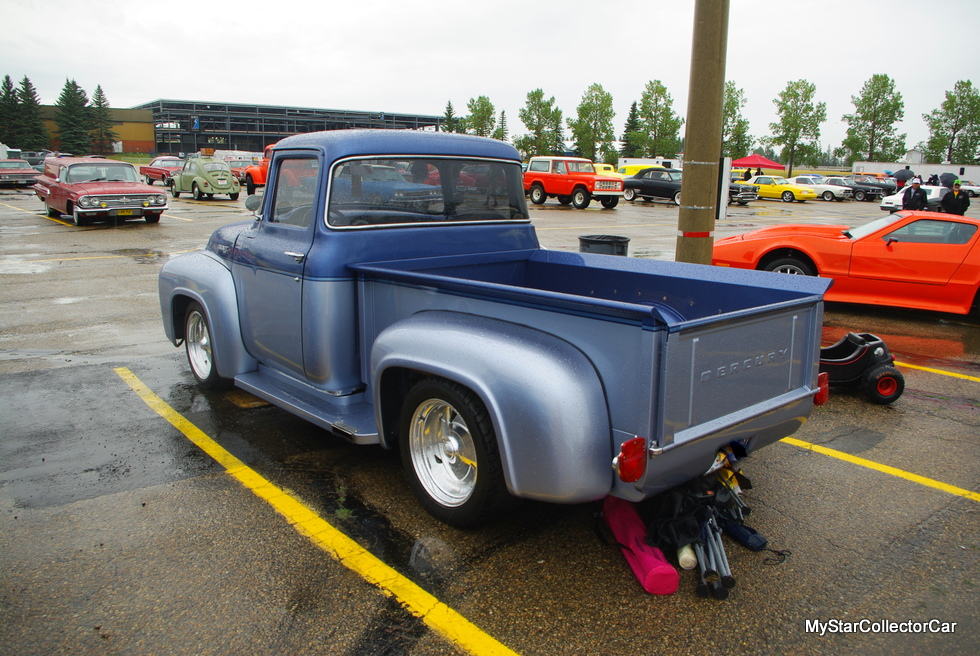 A 1956 Mercury M-100 ½ ton pickup bears a strong resemblance to a 1956 Ford F-100 pickup in stock form. The badges and tailgate name were the primary way to identify a Canuck truck like the Mercury in 1956. 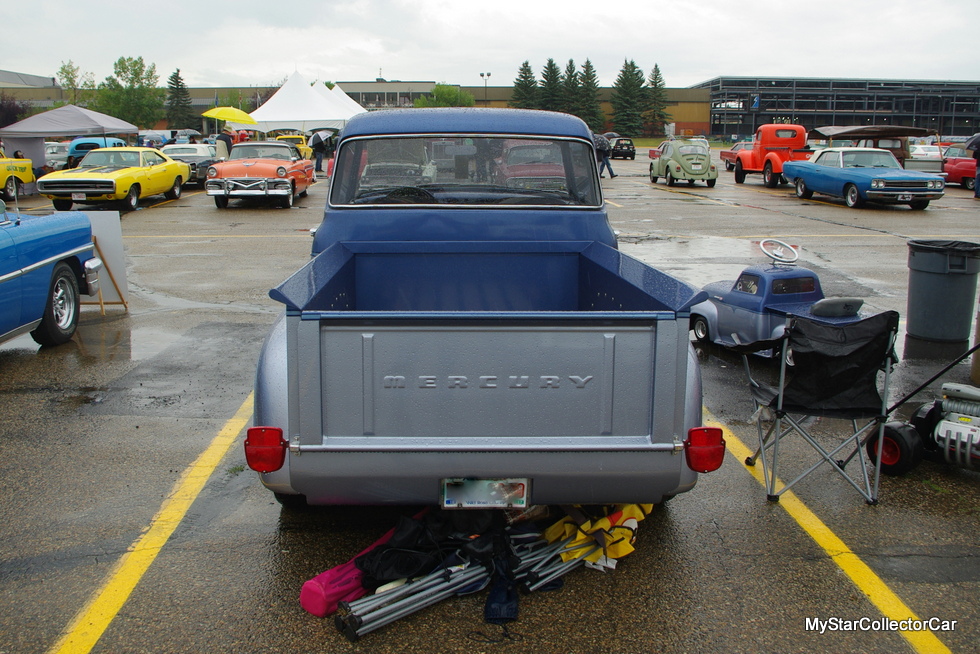 Al and Carol Johnson are the proud owners of a 1956 Mercury M-100 pickup that is a creative blend of stock and custom features. Their Mercury also comes with a toy replica truck that is based upon a 1955 Mercury truck and is not really meant for kids because Al says he only has enough nerve to hit about 45 mph (about 70 km/h) before he lets off the gas in the miniature truck.

The full-size truck still has its factory 272 cubic inch V-8 bolted up to a later model C-4 automatic transmission. Al chose an aftermarket EFI system that replaced the original carb on the engine, along with an aftermarket electronic ignition to give extra spark to the combustion sequence. 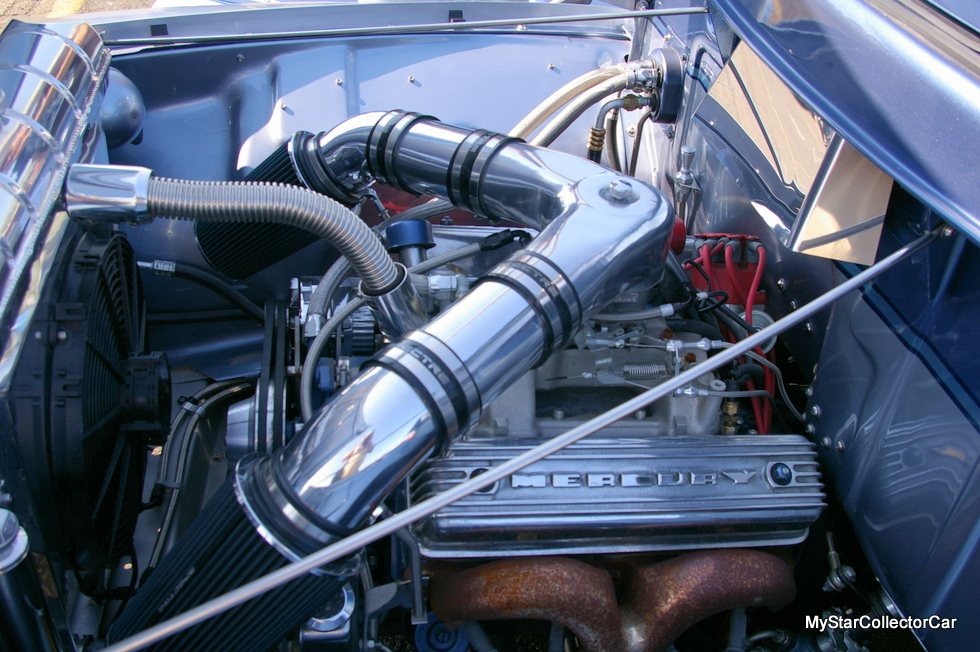 The Mercury truck also sports an aftermarket air conditioning system to make it cooler inside its cab and a four-wheel disc brake system that slows the pickup down in any situation. Al also added smaller brake fluid fillers that are connected to a master cylinder attached to the truck’s frame so he could gain extra room under the Merc’s hood.

The Mercury valve covers are a custom touch that were built in very limited numbers by an Australian fabricator. Al mentioned he was also able to fit a Toyota power steering box in his Merc because he wanted a smaller steering box in the truck. He added the new unit “fits in nice” as a replacement for the original Mercury steering box. 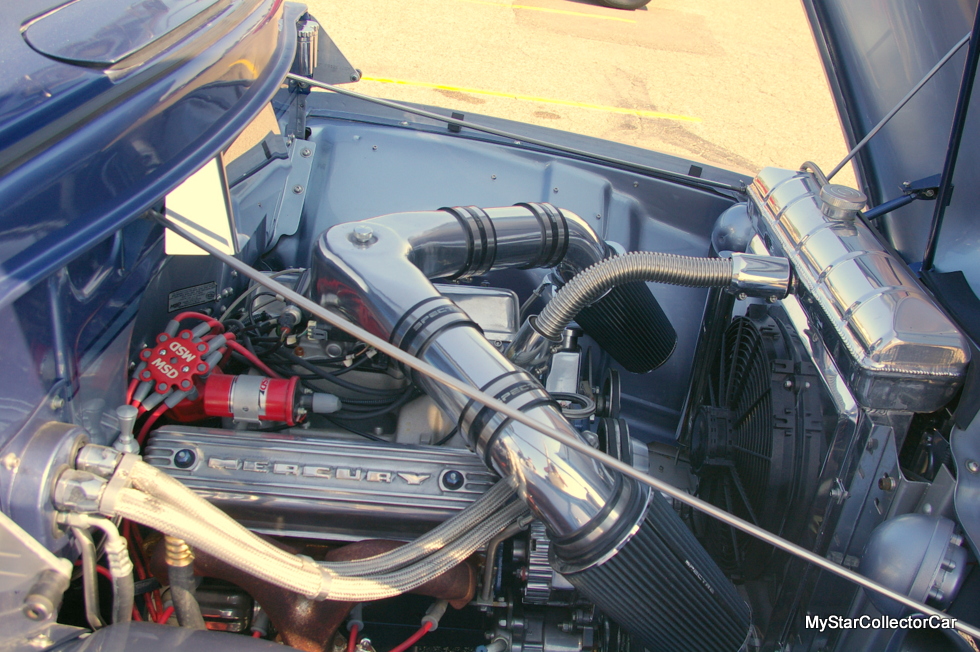 The seats were originally found in a Chrysler 300 and were modified so they would fit in the Mercury truck’s cab. He also re-directed the exhaust system so it exited just beyond the cab. The custom heat plates on the Merc truck’s exhaust system read “272 EFI” so Al can enjoy both style and function with his new exhaust system. 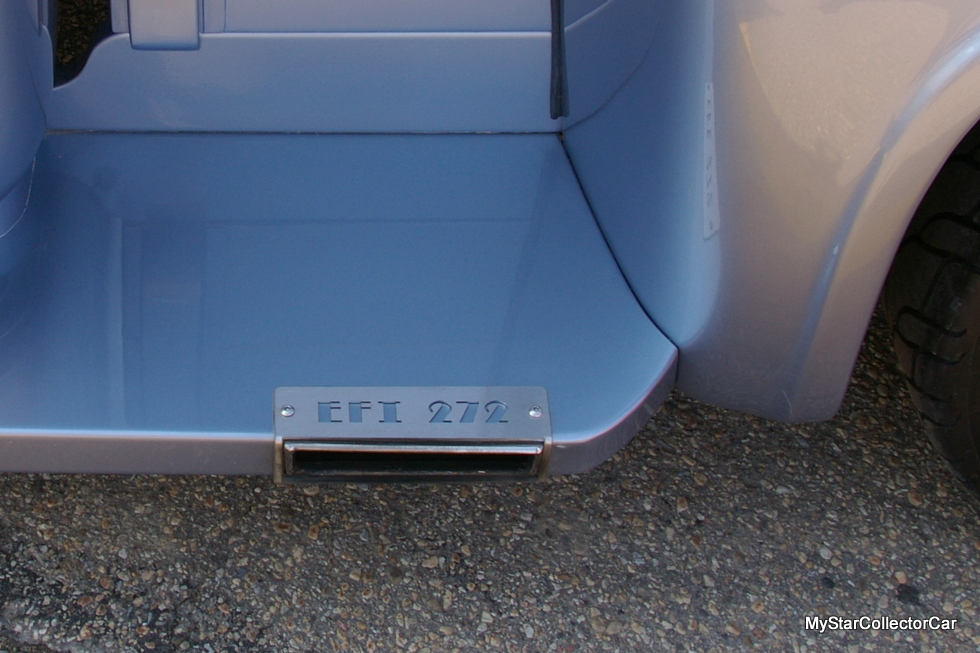 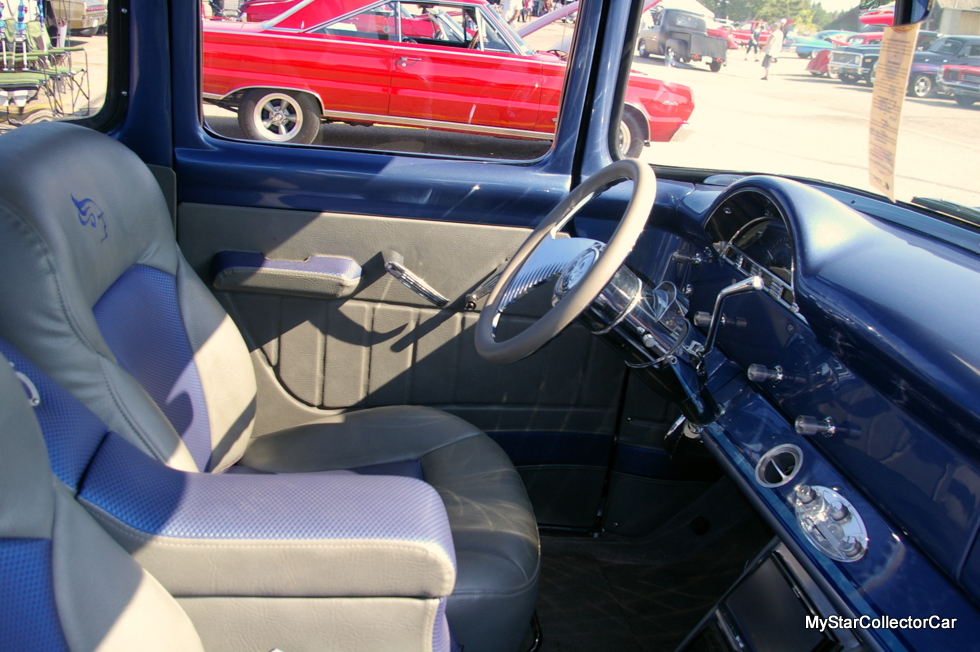 He removed the front and rear bumpers on the Mercury so he could give the truck a cleaner custom style. However, Al also mentioned that he was able to find rare NOS (new old stock) Mercury truck tail light lenses that were an authentic addition to his project. 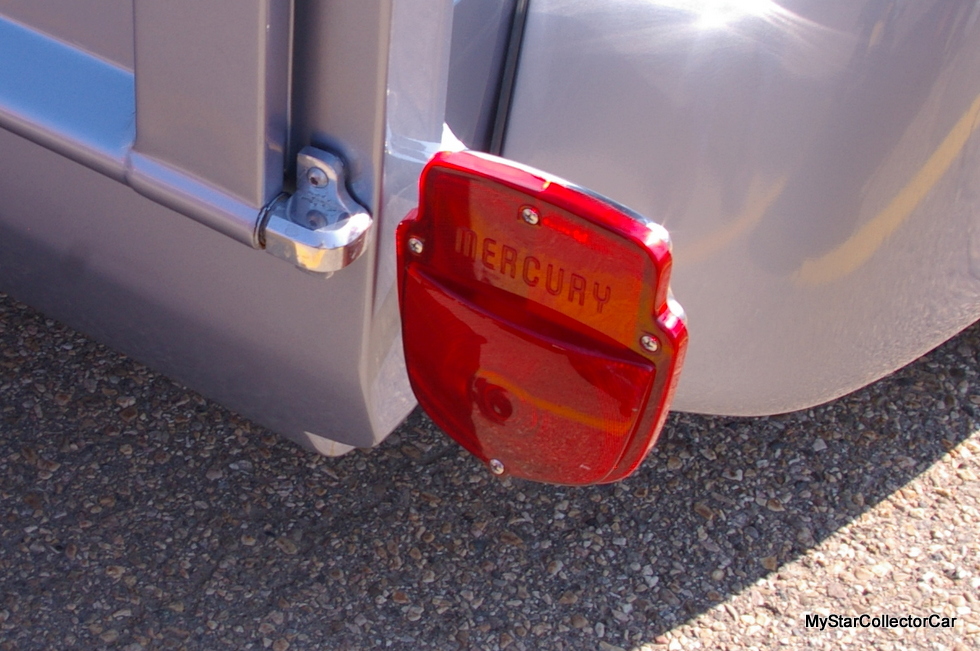 The Merc truck has been tubbed so Al could mount custom aftermarket performance wheels and tires on the pickup. He lowered the pickup about 4 inches to give the Mercury a more aggressive stance, but he retained the original straight axle steering/suspension on the truck. 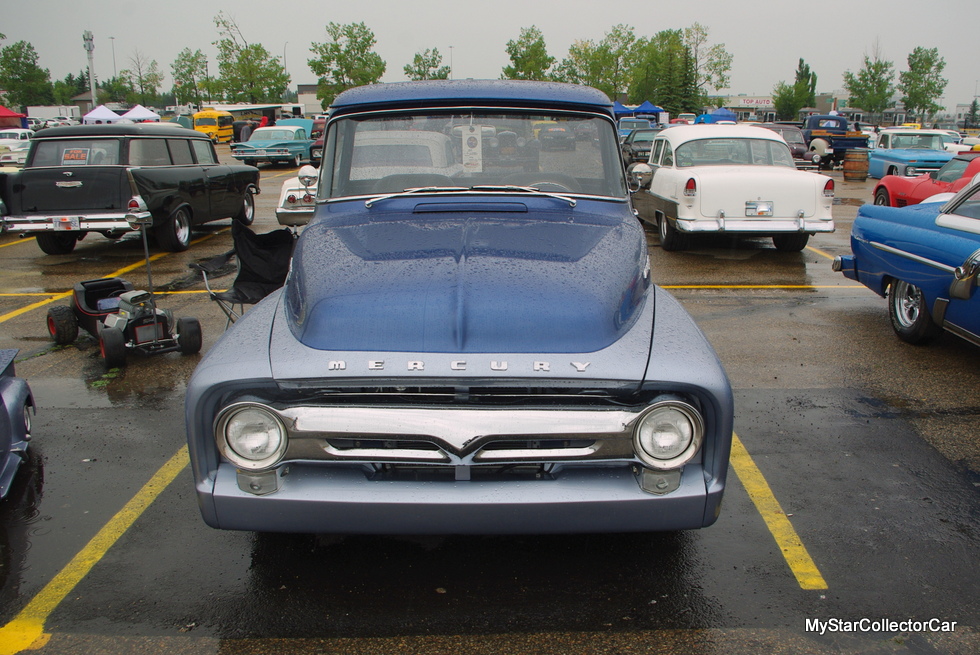 Al was very happy with the blend of old and new technology on his Mercury when it was completed after 2 ½ years in his garage. The Mercury truck is now “very comfortable” in Al’s opinion because he has been able to add many creature comforts to his 63-year-old pickup. 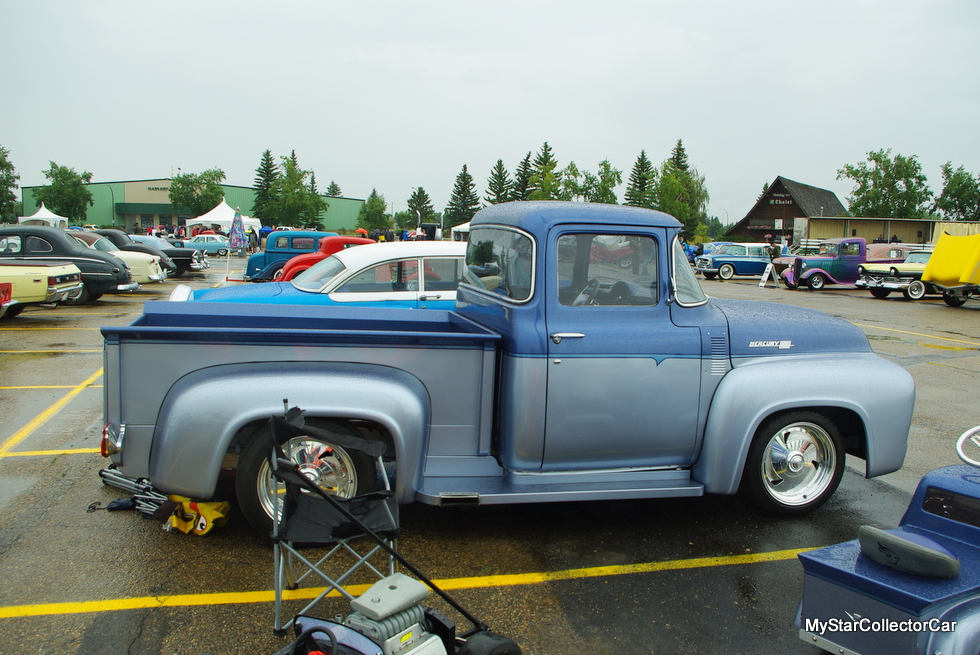 The result of his work has lived up to Al’s expectations in every way. Now he and Carol get to enjoy the open road with his custom 1956 Canuck truck.