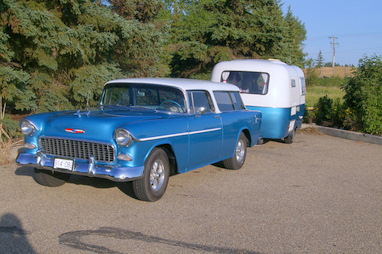 John Smith needed a functional station wagon many years ago to haul his family so he bought a 64 Ford wagon.

His son was physically challenged-he needed the extra room for the wheelchair.

It worked fine but, as John said, “it wasn’t cool” so he sold it and picked up this 1955 Chevrolet Nomad.

John beat the system when it comes to family taxis because most guys have to think practicality first and cool second.

John’s a retired fireman who also happens to be a great body man so he’s kept the classic Chevy in great shape. He’s upgraded the power train with a new 350 but he kept the hot rodder’s mantra alive with a 4-speed manual transmission. He’s a 50s era guy who truly believes that V8s and shifting go together.

John and his ’55 are on the road constantly during the summer. He’s driven the Nomad across Canada and down the east coast. He was shot at in Maine by a guy coming out of the bushes and, when asked about it, John simply says, “I didn’t stick around to find out”. John travels with a Boler trailer done up as a 50s diner-that was another testimony to his skill. 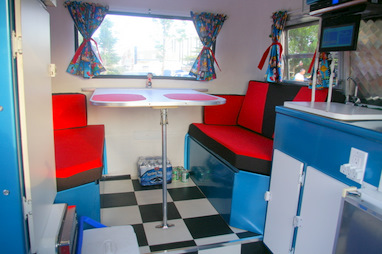 This Boler was covered in moss and the interior was gutted when he hauled it out of the bush but now it’s a fully functional mobile museum to a time gone by. 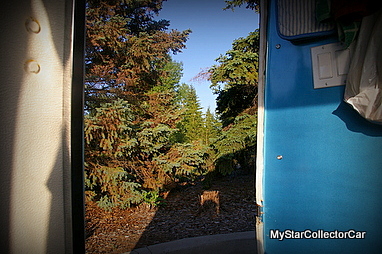 John’s driven this combo through South Carolina, Tennessee, and Arkansas through Route 66 to Reno for Hot August Nights-and back up the west coast in one trip. He’s even been to the Mecca of all that is 1950s by including Graceland on the tour.

In all those miles he’s had very few problems-the worst being a valve problem that was solved for free in Bathurst New Brunswick by, ironically, a garage owned by the Good Brothers. Their Maritime hospitality wouldn’t allow them to hand John a bill for this stricken Nomad.

John’s having a great time with his long time Chevy buddy-this year he’s keeping the Nomad tradition alive with a long, drawn out road trip. That’s the appeal of the open road for both of these gypsies with ties to the 1950s.

Who says that practical and cool are mutually exclusive?